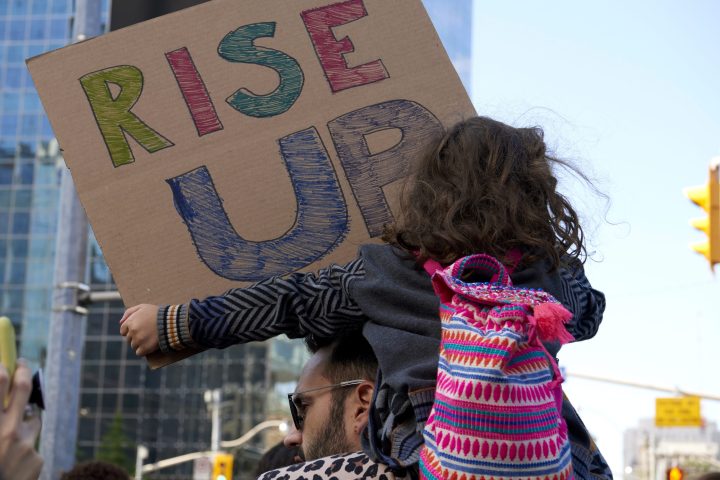 TORONTO — Ontario has set greenhouse gas emissions reduction targets dangerously low and is therefore discriminating against young people, who will bear a disproportionate burden of climate change, seven youth activists argue in a lawsuit against the government.

Their constitutional challenge, backed by Ecojustice environmental lawyers, is set to be heard Monday in Ontario Superior Court.

“Although climate change is global in scale, how decisions are made provincially and at every level is fundamentally important for addressing this issue that affects all of us,” one of the youth, Shaelyn Wabegijig, said at a press conference Sunday.

“We are here today to address the dire situation we find ourselves in and are able to tell our children that we did all we could, while we could, to change our trajectory.”

The crux of the lawsuit dates back to 2018 when the newly elected Progressive Conservative government repealed a law from the former Liberal government that had established a cap-and-trade system for reducing emissions. That law had set a target of reducing emissions 37 per cent below 1990 levels by 2030.

The Tories replaced that target with one to reduce emissions 30 per cent below 2005 levels by 2030. Reducing the percentage target and moving the baseline year will allow for an additional 200 million tonnes, the youth’s experts say.

That is a “dangerously high level of greenhouse gas emissions” and violates the sections of the charter on life and security of the person, as well as discrimination based on age, the lawsuit alleges.

“Youth — and, in particular, youth under 18 years old — and future generations will bear a disproportionate burden of climate change’s most devastating impacts due to their unique characteristics, and the fact that the escalating nature of the impacts of climate change means the most devastating effects will occur during their lifetimes,” the activists and their lawyers say in their written arguments.

The Ontario government is asking the court to dismiss the lawsuit, arguing against “judicial control over environmental and climate policy.” There is no constitutional right requiring a government to take certain actions now to avoid future climate-related harms, government lawyers say in written arguments.

Ontario doesn’t dispute human-caused climate change and its risks to people’s health, but in order for the lawsuit to succeed, the youth would have to prove that the province’s new target would cause or contribute to those harms – and they don’t, government lawyers say.

“It is fanciful to imagine that invalidating Ontario’s plan and target could avert the harms caused by anthropogenic climate change,” they write, arguing that Ontario’s emissions represent less than one per cent of the global total.

“None of the applicants’ experts gave evidence that any harms in Ontario caused by climate change would be averted or even measurably mitigated if Ontario set a different target or came up with a different plan for the year 2030.”

Defeated at the Supreme Court, Ontario will dramatically raise the industrial carbon price

But the youth question the credibility of the government’s experts on that point, saying they “fail to recognize the collective action aspect of the global warming problem.”

“They focus on the relatively small fraction of Ontario’s GHG on the global scale instead of the fact that jurisdictions like Ontario must take action in order to avert climate disaster,” lawyers for the youth write in their arguments.

This case is a chance to communicate to Ontario and the rest of the country why strong emission reduction targets are needed, said Zoe Keary-Matzner, one of the youth involved in the lawsuit.

“In all my 15 years, I don’t remember a time when I wasn’t deeply concerned about climate change and the fate of the world,” she said at the press conference. “I only wish my government felt the same.”