Home New Release Why all Canadians should know the story of a Great War hero...
New Release 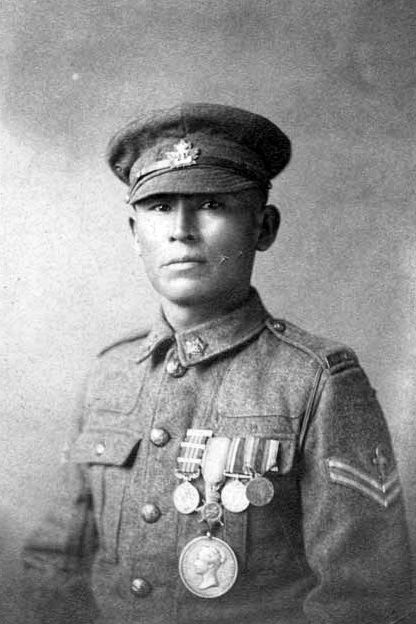 It’s not easy to find the last resting spot of Cpl. Francis Pegahmagabow.

Whether by design or happenstance, the First World War sniper’s grave sits apart from the larger cemetery in the Wasauksing First Nation near Parry Sound, Ont.  Still, it’s likely the man known as “Peggy” would have considered the spot to be perfect.

Pegahmagabow isn’t a name that first comes to mind when discussing the Great War, which speaks more to his ancestry than the fact he’s the most decorated Indigenous soldier in Canadian history.

“Francis’s story is a story that I wouldn’t say was forgotten, but it certainly was one of those sleeping stories in our history,” says his great-grandson, Brian McInnis.

He was credited with 378 kills, making him the deadliest sniper of the war. However, he never used a spotter when entering no-man’s land between the trenches so there was never a second person to confirm his kills. While some might dispute his claims, there’s no dispute over the 300 German soldiers he captured or his work as a scout running in and out of battles.

“He won the military medal three times, and is one of 38 Canadians to ever do this and those are awarded by the Battalion Brigade Commander,” notes author and historian Timothy Winegard.

So how is it that Pegahmagabow’s exploits are not taught in Canadian history? Or that he only had a statue in Parry Sound dedicated in his honour in 2016? To understand that is to go back a hundred years when Indigenous people, then referred to as Indians, weren’t allowed to volunteer to fight in the war.

It was only after Canadian Forces began to suffer significant losses that Pegahmagabow was allowed to enlist. Over the next four years, he fought in the most horrific battles of the war, including Passchendaele, Somme and the second battle of Ypres when the Germans used chlorine gas. In his book Sounding Thunder, McInnes recounts a story about Pegahmagabow’s superiors asking him to use a traditional tobacco offering to change the direction of the winds.

The stories that do exist come largely from his fellow soldiers or the write-ups he received for his medals.  Great-granddaughter Julia Pegahmagabow recalls a childhood where the only time she would see Francis open up was around other veterans. His war record and life story, she says, should be more widely known.

“There is a gap in our in the history being told about Canada in regards to the work Indigenous people did,” she says.

Immediately after the war, Indigenous veterans were more concerned about their quality of life than recognition for what they did. When Pegahmagabow returned to the shores of Georgian Bay, he still didn’t have Canadian citizenship. He would die in 1952, four years before the Canadian citizenship Act allowed First Nations people to qualify for that right. And the poverty and persecution he knew before the war was still there after it.

“I think there was a stark realization that, ‘oh, nothing has changed,’” says McInnes. “And if anything, if you try to make change, you actually experience an enhanced oppression, an enhanced colonial effect I suppose you could say, and that was something that did surprise him in the worst way.”


His biggest complaint was about the so-called Indian Agents, representatives of the government who were tasked with administering the day-to-day affairs on reserves. Pegahmagabow at one point needed money to buy a pair of shoes but was denied, just as he was when he applied for money through the Soldiers Settlement Act.

That government policies were able to control a man such as Pegahmagabow, says Timothy Winegard, was seen as a propaganda tool by Indian Affairs.  Meanwhile, all Pegahmagabow and other veterans wanted was to be accepted.

Pegahmagabow would spend the rest of his life trying to achieve equality and see control on reserves shift from Indian Agents to Band Councils. Sadly, he didn’t live long enough to see the fruits of his labour.

He also never saw the respect afforded other heroes from the Great War. But over the last decade, that’s begun to change.

In 2016, a life-size bronze statue of Cpl. Francis Pegahmagabow was in unveiled Parry Sound and the 3rd Canadian Ranger Patrol Group HQ Building at CFB Borden now bears his name.

“I think we are entering a future in which there’s the potential for the accomplishments of historic veterans like Francis Pegahmagabow, and all Indigenous veterans, to be told,” says McInnes.

“I think also we’re in a unique present and place for the future, whereby the continuing accomplishments of our Indigenous service people can also be told and recognized.”