Home Tech News When will the Draconid meteor shower 2021 peak and how to see...
Tech News

When will the Draconid meteor shower 2021 peak and how to see it in the UK? 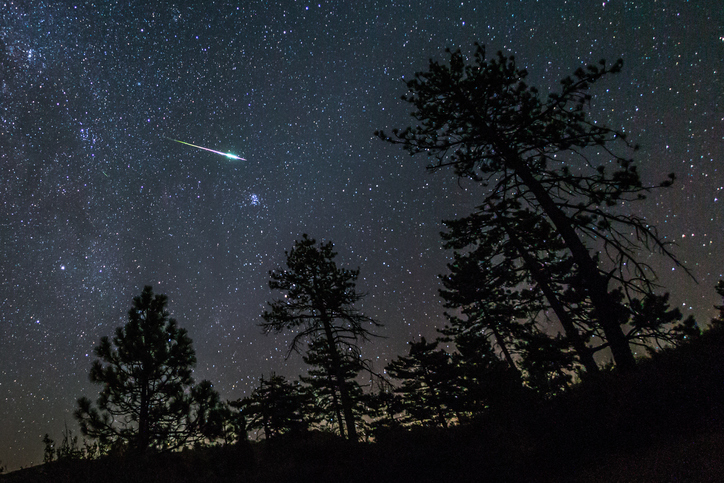 The Draconid meteor shower will hit UK skies on Friday evening, when stargazers might see up to 10 shooting stars an hour.

The meteor shower, which occurs each year, will be most visible for UK residents just after nightfall tomorrow, away from light pollution and with clear skies.

Unfortunately, the Met Office has forecasted bad weather for much of the UK tomorrow, with cloud covering much of the country.

But any breaks in the cloud cover could still allow for some shooting star sightings.

What is the Draconid Meteor Shower?

Meteor showers occur when the Earth passes through a debris cloud from a comet, causing a light show when the debris interacts with the Earth’s atmosphere.

The Draconid meteor shower comes specifically from the debris cloud of comet 21 P/Giacobini-Zinner, a relatively small comet at 1.24 miles wide.

The debris cloud is topped up every 6.6 years as it orbits around the inner solar system.

When the debris cloud, consisting of rocks and dust particles, interacts with air molecules in the Earth’s atmosphere, viewers looking up at the sky can see bright lights from the interactions.

How can you see the Draconid meteor shower?

The best way to watch the meteor shower is by watching from a point with as little light pollution as possible and clear skies.

However, as cloud is forecasted for much of the UK tomorrow, breaks in the cloud cover are the best bet.

The meteor shower will be most visible in the early evening shortly after nightfall, when the constellation Draco the Dragon, the location of the debris cloud, is at its zenith.

The Draconid meteor shower is set to last from October 7 to 11, but the peak will be tomorrow evening into Saturday morning.

You don’t need binoculars or a telescope to see the shooting stars, you just need to look at a wide stretch of night sky with your own eyes.

The darkest, and best, places to watch the night sky in the UK are in the so-called ‘Dark Sky Reserves’: Snowdonia, Brecon Beacons and Exmoor national parks.

How many shooting stars will there be in the Draconid meteor shower?

The exact rate of shooting stars, or meteors, during the shower’s peak depends on which part of the comet’s tail the Earth passes through.

It’s difficult to tell exactly which part of the tail we will be set to pass through, so astronomers describe the Draconids as ‘variable’.

‘However, in 1933 and 1946 the Draconids produced some of the most active displays in the 20th century,’ the Royal Observatory Greenwich writes on its website.

The 2011 and 2018 Draconid shower showed more activity than expected, so 2021 could follow in their footsteps.

The Draconids normally produce around five to ten meteors an hour, but some displays have shown thousands per hour.


MORE : UK meteorite contains material from the dawn of the solar system


MORE : Meteor pictured lighting up UK skies as it shoots over Channel