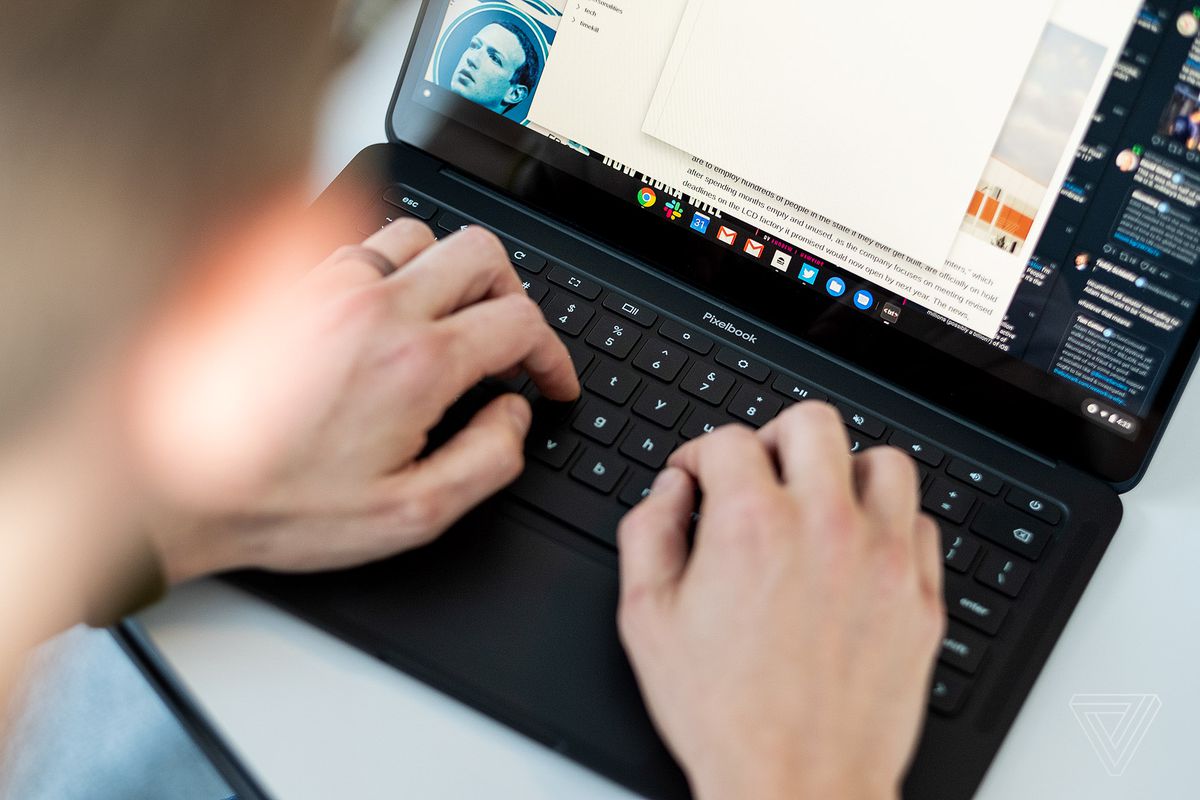 Shopping for a laptop can be stressful — doubly stressful if you or your children will be learning online for the first time. Kids of different ages have a range of different laptop use cases and different needs. And as the choices for best laptop and best Chromebook evolve, so do students’ needs. So I spoke to some experts on the subject: students themselves.

My recommendations here are meant to accommodate a variety of preferences and price ranges. But they’re a jumping-off point rather than an exhaustive list: every student is different. Before making a decision, you’ll want to make sure you read reviews and try out devices yourself if you can. I’ll do my best to keep this article up to date with items that are in stock.

For younger students, a touchscreen device is easier to use than a keyboard and touchpad, says Michelle Glogovac. Glogovac’s five-year-old son uses an iPad for Webex meetings with his kindergarten class. He’s gotten the hang of it; Glogovac says he’s already learned how to mute and unmute himself, “a skill that many adults aren’t familiar with.”

That said, it may be worth investing in a keyboard case if you go the tablet route. Glogovac has to type her son’s meeting codes and passwords for him, which can be cumbersome on the iPad’s flat screen.

As kids get older, their best laptop choice will vary depending on their needs. As a parent, it’s important that you and your child are in sync about how they intend to use it and the size of the programs they want.

Kristin Wallace purchased a budget HP laptop for her daughter, Bella, but didn’t realize how quickly the nine-year-old would fill up 32GB of storage. “It is really slow and has no space for games. I need a computer with more storage space,” said Bella, who uses the laptop to Zoom with friends and take virtual guitar lessons and math enrichment classes. Wallace plans to buy Bella a better device in the next few weeks.

Audio quality is an important consideration for kids’ laptops. Lisa Mitchell, an elementary library media specialist, says her students use their devices to watch YouTube videos in addition to their online classes. Battery life is also a plus, even for distance learners who may not be far from a wall outlet. Bella likes to use her laptop all around the house and doesn’t want to bring the cord with her.

Durability is also worth paying for, according to Mitchell. If you’re using a tablet, get a protective case. “If a reasonably-priced insurance or replacement policy is available, it’s usually worth the extra expense.”

The middle school students I spoke to don’t use their laptops for much more than web-based schoolwork and browsing. Don’t be too concerned about power — prioritize a machine that’s comfortable and easy for your child to use.

Hartley’s son Max, who is in eighth grade, agrees. “I would really like a gaming PC or gaming laptop that can plug into a monitor and run video games with 120fps, but I really don’t need that,” Max says. “Most eighth graders aren’t going to be running any video games on their laptops or any software that requires a lot of power.”

Max mostly uses his laptop for Google Classroom applications, including Gmail, Slides, Google Docs, and Google Sheets. They’re very easy to use on his device, which he describes as “a run-of-the-mill Samsung Chromebook.” That said, if your child is starting middle school this year, it could be worth checking with their teachers to see what operating system is most compatible with their workflow. Caspian Fischer Odén, a ninth grader from Sweden, told me he has trouble with his Chromebook because his school has blocked downloading apps from the Google Play Store.

Even kids with more demanding hobbies think a budget device can get the job done. Sam Hickman, an eighth grader from the UK who uses his laptop for photo and video editing, says, “For most middle schoolers, any processor developed within the last two years will be able to handle any tasks they can throw at it.”

So, what is worth paying for? A comfortable keyboard, several students told me. Many middle school kids aren’t used to typing for long periods of time. You should also look for a device that’s compact and easy for them to carry around, particularly if they’re preparing for in-person school. Shoot for an 11- to 13-inch model — certainly nothing larger than 15 inches.

High schoolers’ laptop needs can vary based on their interests, but most don’t need powerful machines with lots of bells and whistles — especially if they come with glitches or serious downsides that could interfere with schoolwork. Miles Riehle, a student at Laguna Beach High School, has a high-end Surface Pro 7 but finds it overwhelming. “There is so much other stuff that I don’t use very often,” he said. “Something simpler might be a little more straightforward.”

The best operating system may depend on what your child is used to. Aryan Nambiar, a student at Barrington High School in Illinois, has an iMac at home and enjoys using an iPad for his schoolwork. Riehle says he would prefer a Chromebook because he has an Android phone and often uses Google services.

But almost every student I spoke to agreed that the most important feature of a high school laptop is portability. Kids attending in-person classes may be carrying their device around for much of the day with a stack of other books. Look for a 13- or 14-inch screen, or a lighter 15- to 17-inch model.

Students also recommend something sturdy. “Most high schoolers I’ve seen will throw their laptop in their bag without too much care,” says Moses Buckwalter, a student at Penn Manor High School. Backpacks can be jostled in the hallway as well. Distance learners can still run into trouble at home. “Anything can happen,” says Aadit Agrawal, a high school student from India. “My own brother scratched my laptop with his nails.”

Battery life is another key feature. “It can be a real struggle to find a place to charge while in class,” says Cas Heemskerk, a sophomore from the Netherlands. Unlike college students, many high schoolers don’t have frequent breaks to juice up their devices, so try to find something that can last a full day.

Many students recommend a touchscreen with stylus support. Nambiar uses the feature for his biology class, where he does a lot of visual modeling. “The touchscreen is always a bonus for drawing diagrams, whereas if you’re using a laptop it’d be a whole process to submit a diagram you drew,” Nambiar says. Riehle uses a Surface Pen to fill out school forms and annotate PDFs. Agrawal finds it useful to take notes on the same screen as his online lessons.

Depending on the broadband situation in your area, you may also want a laptop with multiple connectivity options. Agrawal’s online classes are sometimes interrupted by powercuts, so he recommends an LTE model. Matej Plavevski, a junior at Yahya Kemal College in North Macedonia, recommends looking for an Ethernet port in case slower connections disrupt meetings. That’s hard to find on smaller laptops, but there’s a slew of affordable dongles and docks to consider.

College kids are justified in spending a bit more money than other age groups. Some (especially in STEM courses) can expect to do some fairly demanding work. Assad Abid, an electrical engineering undergrad from Pakistan, needs to run simulation software for his assignments. Aakash Chandra, a student at New Horizon College of Engineering in India, does a lot of coding, in addition to creative work in Premiere Pro and Photoshop, and gaming. Students also noted that it’s worthwhile to pay for a laptop that will last for a few years after graduation. That means you won’t have to worry about finding and financing your next device until you’re (hopefully) settled into a job.

But among high-end, capable devices there’s still a wide range of options. Students stressed that a college laptop should be light. Expect to bring it between classes, meals, meetings, the library, and other locations on campus. “It’s a boon that I can carry my laptop as well as some notebooks without feeling like I’m carrying too much for six hours a day,” says Haseeb Waseem, a senior at Villanova University.

Another universally-lauded feature: battery life. Waseem, who uses an HP Spectre, says the all-day juice gives him “the flexibility to study in a bunch of different locations, and even outside.”

Speakers and webcams are often overlooked, even in top-end devices. But students say it’s worth looking for good ones if you’re starting college this year. Zoom will be a large part of university life this semester: many kids will be attending virtual classes, while others will still be meeting with clubs, study groups, and professors as well as hanging out with friends online. Waseem isn’t satisfied with his laptop’s audio and picture quality, which he says has made it difficult to pay attention in class and to engage with other students.

Many students will need to invest more in areas tailored to their interests and schoolwork needs. Chandra’s dream laptop would include a stylus and touchscreen for his creative work as well as a high-end GPU. Waseem, who uses his laptop for a hodgepodge of activities, including streaming, coding, social media, video chatting, and Microsoft Office work, would prefer to prioritize a large screen to keep track of his multitasking.

Research in the field of machine learning and AI, now a key technology in practically every industry and company, is far too voluminous for...
Read more