Home Tech News What parts of the UK will be underwater if sea levels keep...
Tech News

What parts of the UK will be underwater if sea levels keep rising? 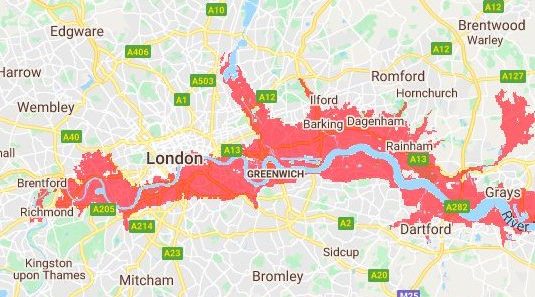 Without sufficient action, experts warn that coastal and low-lying areas in the UK that are vulnerable to flooding could be completely submerged in water by 2050.

In 2020, the rise in global sea levels reached a record high of 3.6 inches above 1993 levels according to a study by climate.gov.

The rate at which sea levels are rising has also more than doubled throughout most of the twentieth century from 0.06 inches per year to 0.14 inches per year.

Bolton and South Holland in Lincolnshire would also be badly affected.

The eastern coast is predicted to be majorly hit with the sea potentially claiming large areas inland including Hull, Lincoln and Spalding.

In the west, the Lancashire coast including Blackpool and Southport are among the areas that could be underwater by 2050.

The capital looks like it will fare no better with areas near the river likely to be affected including Fulham, Greenwich and Stratford, up to Walthamstow.

Experts said that Buckingham Palace could be flooded up to its second floor even under the best-case scenario, prompting the need to move the capital from London.

Climate Central has also developed a powerful visual tool to illustrate the potential impact of global warming using Google Earth images. Realistic renderings of coastal locations that will be affected by rising sea levels can be seen through the Picturing Our Future interface.

It shows how parts of the UK, including historical and cultural landmarks, will be underwater, for example, the Brighton Palace Pier.

Over 1.3 million residential and commercial addresses in Britain will be at risk of flooding by 2050 according to locations intelligence provider Gamma.

The effects of climate change are already being seen in Britain with February 2020 being the wettest recorded one due to the arrival of storms Ciara, Dennis and Jorge.

Even if the world follows a low greenhouse gas pathway, by the year 2100, global sea levels are likely to rise at least 12 inches above what they were in the year 2000.

According to NASA, the ocean absorbs more than 90% of the heat trapped by the planet due to the increasing concentrations of greenhouse gases in the atmosphere. As the water heats up, its volume expands and causes a rise in sea levels.

Warmer oceans will lead to increased rainfall and stronger, more frequent storms. As the planet gets warmer, the melting ice sheets also contribute to rising sea levels. As a result, low-lying coastal areas around the world already face frequent flooding and some could potentially become uninhabitable in the future.

World leaders are currently in discussions about making lasting policy changes to tackle the effects of climate change at COP26 in Glasgow. The UK government has also planned to invest significantly in flood prevention projects like raising flood walls and expanding floodplains over the next six years.

What is London doing to protect itself from rising sea levels?

There is a current Thames Barrier in place to protect the city against flooding and is being used 6-7 times a year on average. However, this was not intended to protect against sea-level rises caused by climate change.

The Environment Agency has devised a new plan called the Thames Estuary Plan which contains protection strategies for the next 15 years and beyond until the end of the 21st century.

According to the Environment Agency, the Thames estuary’s most significant flood risk is from a tidal surge event and therefore a system of defences has been constructed to reduce the risk of tidal flooding. This includes the Thames Barrier, other smaller barriers, 350 kilometres of flood walls and embankments, pumping stations and flood gates.

The Thames Estuary Plan was approved by the government in 2012 and sets out how the Environment Agency, working with partners, will continue to protect the 1.25 million people and £200 billion worth of property from tidal flood risk in the capital.


MORE : More than 100 nations will vow to end deforestation by 2030 at climate summit