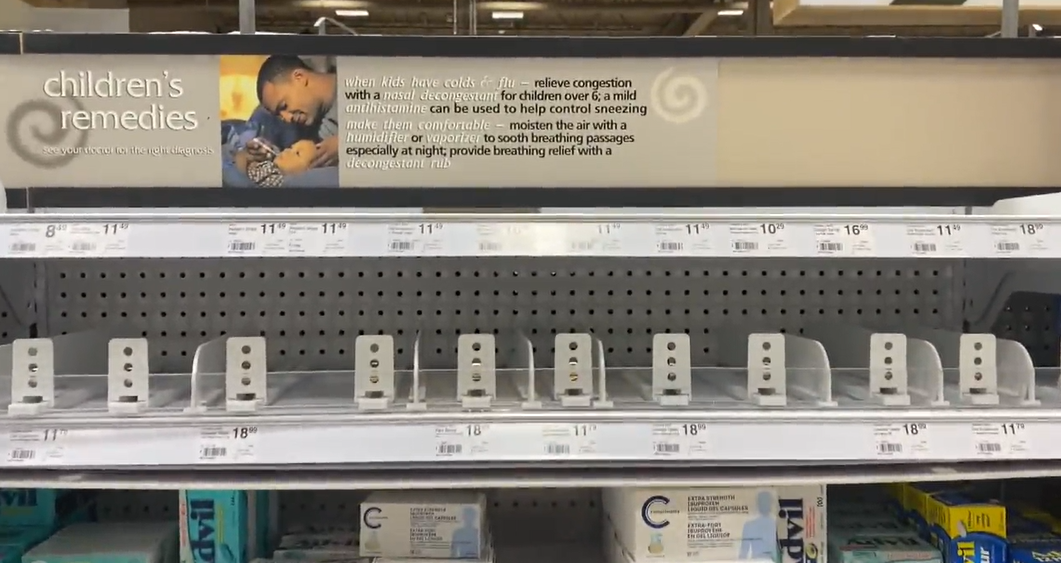 Shortages of children’s painkillers have been making headlines across Canada.

Now, an Okanagan mother is speaking out about the impact on her family and is urging others not to buy more than they need.

Coldstream, B.C. parent Stacie Grahn said when her three-year-old son fell ill this week, her husband went to a couple of different local pharmacies and was unable to find liquid kids’ Advil or Tylenol.

So he ended up buying some adult medication.

“We were trying to crush that up for him, but…it is not easy to give that to a child,” said Grahn.

“It was actually very scary, especially in the middle of the night at four in the morning, with his fever not going down. I was laying there thinking how many other parents are in this situation right now?”

At Nolan’s Parmasave, in Vernon, a shelf that usually holds children’s painkillers is empty, and notes about when items will be available list dates from next month to next year.

A few blocks away at SterlingRX Pharmacy, supplies of children’s painkillers were limited on Thursday.

“Most of it we were just able to scab together from the short supplies that show up in the warehouse we order from, but restocking is pretty difficult at this point,” said pharmacy manager Graeme Nevins.

2:02
B.C. continues to experience shortage of pain meds for kids

B.C. continues to experience shortage of pain meds for kids

Health Canada said, in a statement to Global News, companies are reporting the issue is higher than normal demand coupled with supply chain problems.

Earlier this month, the province blamed panic buying based on false reports that a prescription is needed for Tylenol.

B.C. parents urged not to stockpile or panic buy amid kids’ painkiller shortage

However, more recently, the provincial Ministry of Health also mentioned supply problems as an issue. In a Thursday statement, the ministry said BC Children’s Hospital “is dealing with supply chain disruptions,” but “has sufficient supply in stock for” its patients.

Whatever the cause of the shortage, parents, and pharmacists are having to find workarounds.

“Lucky for us we are a compounding pharmacy. We do specialize in making medications extemporaneously so we are able to compound liquid acetaminophen or Tylenol. It is a little bit more expensive but if there is nothing else available that might be the best option,” Nevins.

However, Nevins notes having medication made at the pharmacy can also take 24 to 48 hours, and it’s not clear if they will be able to restock the raw ingredients for the liquid Tylenol if they run out.

Grahn ended up taking her son to the emergency room when his fever wouldn’t go down and later found some children’s painkillers in Kelowna.

“Don’t overbuy. Leave some for parents who don’t have any,” Grahn said.

“I think we are all kind of tired over the past couple of years of panic buying and hoarding. I know for me it brought back a lot of uneasy feelings thinking back to 2020.”

Both the provincial and federal governments are discouraging hoarding and say they are working on mitigation strategies.

— with files from Kylie Stanton