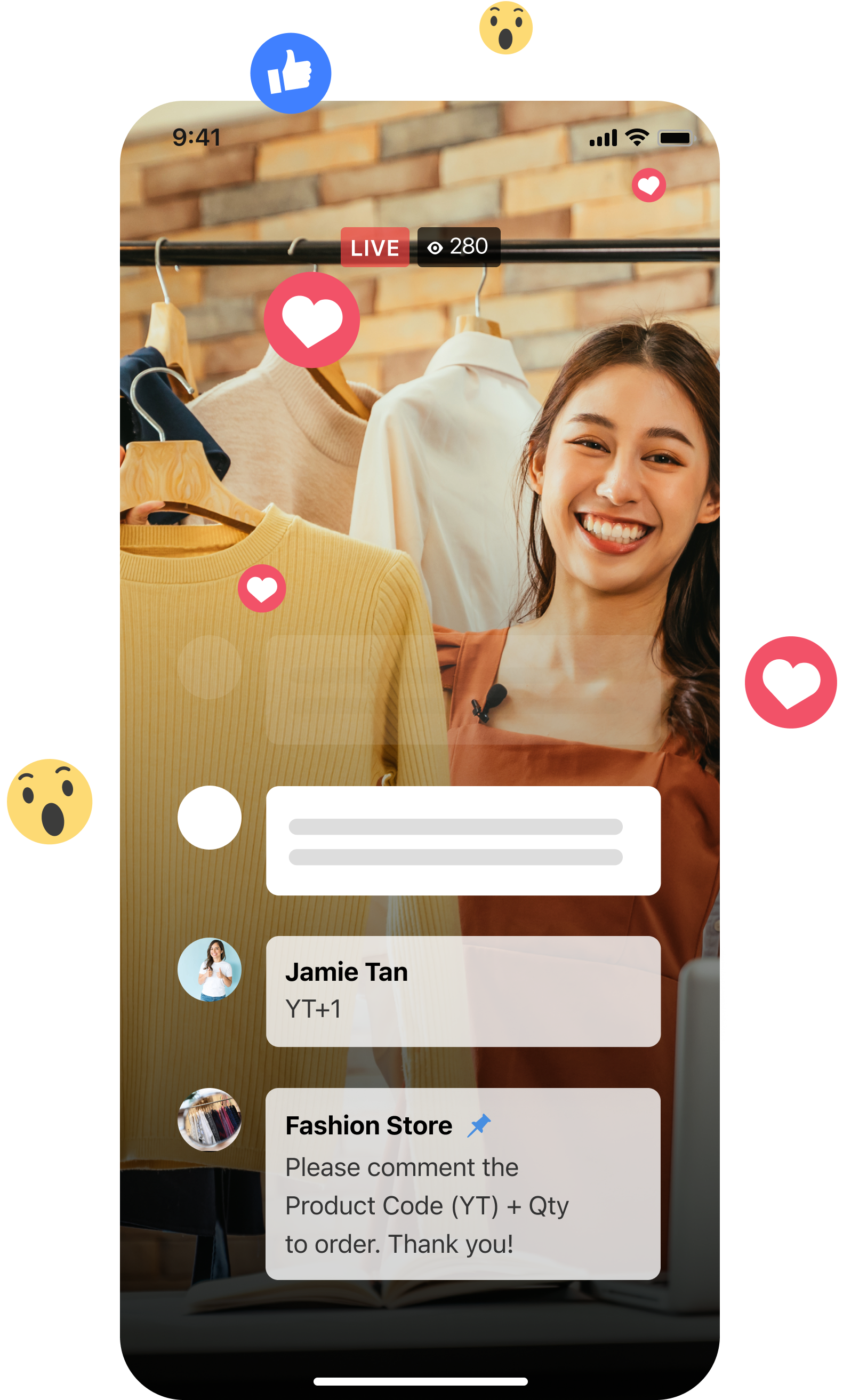 The founders of Upmesh were building a game on top of Twitch’s API when they realized something about another group of livestreamers. Even though selling through Facebook Live has been gaining popularity in Southeast Asia for years, many vendors are still going through their comments afterward and using pen-and-paper to collect orders. Upmesh was created to automate the checkout process and ultimately wants to create a platform similar to Whatnot where people can discover new live commerce sellers across different social media platforms.

Upmesh was launched nine months ago by Wong Zi Yang, Soh Jan, Nhat Vu and Shawn Teow, and is now used by almost 300 live commerce merchants in Singapore, Malaysia and the Philippines. The startup says it processes annualized gross merchandise value of $40 million.

The platform’s tools provide e-commerce functions that automatically capture orders made in livestream comments (for example “white top +1”), matches it to the right item in a seller’s inventory and sends a checkout link to the customer. Upmesh currently works with Facebook Live, but will add other platforms, too, with the goal of becoming platform-agnostic.

Other companies that provide order-capturing tools for live commerce include CommentSold, Dibsly, Soldie and Buy It Live, but Upmesh’s founders say one of its most important differentiators is tailoring its platform to meet the expectations of sellers and customers in different Southeast Asian countries.

“If you look at the live selling climate in Southeast Asia, the way people are collecting orders between each country is very different,” said chief executive officer Wong. “Between Singapore and the Philippines, whether you key-in your inventory before or after your live really different, even whether people maintain stock counts is really different.”

For example, he said in Singapore, inventory turnaround is usually very fast, which means even sellers who offer 1,000s of items only keep stock on the shelf for short periods of time. In the Philippines, however, many vendors do live commerce to supplement their brick-and-mortar shops. Inventory is often taken from their stores and they sell what they have on hand. “The way the software is structured has to be very customized to the individual markets,” Wong said.

Upmesh will use part of its new funding to double down on the Philippines and Malaysia for at least another six months, but it also wants to enter Indonesia, Thailand and Vietnam. The company plans to increase its headcount, launch marketing campaigns and create educational content for sellers.

Wong notes that even though COVID-19 drove adoption of e-commerce, it isn’t what created interest in live commerce. Many of its clients have been livestreaming for about three years. “The way that people interact with e-commerce is changing. It’s becoming more relationship driven. In fact, our sellers actually know their buyers on a first name basis, so they can call them out by name when they join their livestream,” said Wong. “It’s actually replacing advertising for small business.”

Most of Upmesh’s user acquisition so far has been through word-of-mouth, and it serves a lot of fashion live sellers, since they are a closely-knit community, said Wong.

Upmesh’s future plans revolve around turning those communities into new ways of making money, creating a platform that will let sellers and buyers interact with each other and discover live commerce videos on different social media platforms.

“If we look at an interesting comparison to the U.S., the U.S. has live commerce platforms like Whatnot, but Whatnot is focused on collectibles and vintage items, things that have a very strong secondary reseller market,” said Wong. “In the U.S., those verticals have the most amount of community, people who are talking to each other on eBay, on YouTube or offline, and they look those communities and gave them a home to be in.”

Southeast Asia, on the other hand, does not have a similar collectibles market, but communities spring up around different types of goods, like fashion or fresh foods. Those are the kinds of verticals that Upmesh wants to add to its platform.

“That’s the end game for live commerce, that you can discover and interact with different sellers and then once you find a seller you like, you can go deeper,” said Wong. “We direct users’ attention to where they goods are, and since we have the inventory of all our sellers, if you want a red dress, we can tell you which sellers have a red dress.”