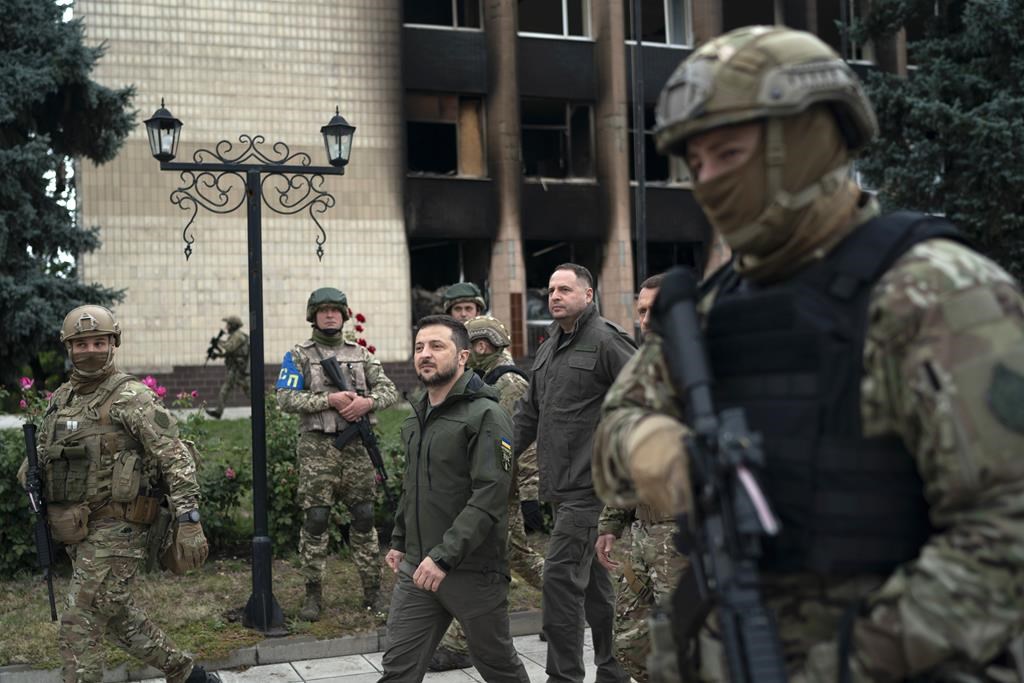 After seven weary months of war, many Ukrainians fear more suffering and political repression awaits them as referendums orchestrated by the Kremlin with help from gun-toting police portend Russia’s imminent annexation of four occupied regions.

Many residents fled the regions before the referendums got underway, scared about being forced to vote or potentially being conscripted into the Russian army.

Petro Kobernik, who left the Russian-held southern city of Kherson just before the preordained voting began Friday, said the prospect of living under Russian law and the escalating war made him and others extremely jittery about the future.

“The situation is changing rapidly, and people fear that they will be hurt either by the Russian military, or Ukrainian guerrillas and the advancing Ukrainian troops,” Kobernik, 31, said in a telephone interview.

As some Russian officials brought ballots to neighborhoods accompanied by armed police, Kobernik said his 70-year-old father shut the door of his private house in the village of Novotroitske — part of Kherson — and vowed not to let anyone in.

The referendums, denounced by Kyiv and its Western allies as rigged, are taking place in the Russian-controlled Luhansk and Kherson regions, and in occupied areas of the Donetsk and Zaporizhzhia regions. They are widely viewed as a pretext for annexation, and Russian authorities are expected to announce the regions as theirs once the vote ends Tuesday.

The Kremlin has used this tactic before. In 2014, it held a hastily called referendum in Ukraine’s Crimea region to justify annexation of the Black Sea peninsula, a move that was denounced as illegitimate by most of the world.

Ukrainian authorities have told residents of the four Russian-occupied regions that they would face criminal punishment if they cast ballots and advised them to leave.

Russian President Vladimir Putin, who began mobilizing more troops for the war last week, said he’s ready to use nuclear weapons to protect territory in a clear threat to Ukraine to halt its attempts to reclaim the regions.

Putin’s escalating rhetoric and politically risky decision to call up as many as 300,000 army reservists comes after Russians were hastily forced to retreat from large swaths of northeastern Ukraine earlier this month. A fierce Ukrainian counteroffensive continues in the country’s east and south.

Moscow-appointed governor of the southern Kherson region, Vladimir Saldo, vowed that Ukrainian attempts to derail the referendum by shelling the city won’t succeed.

“It’s complicated because of security issues, but everything will be done to make the balloting safe for the voters and election officials,” Saldo said in a video address. “People are waiting to join Russia and want it done as quickly as possible.”

Moscow-backed separatists in the eastern Donetsk and Luhansk regions claim that most residents of these territories have dreamed about joining Russia ever since Russia’s annexation of Crimea.

But many residents there tell a different story.

“The streets are empty as people stay home,” Marina Irkho, a 38-year-old resident of the Sea of Azov port city of Berdyansk said by phone. “No one wants them to declare us part of Russia and start rounding up our men.”

She said that that “those who actively stood for Ukraine have left or gone into hiding,” adding that many of the older people who supported Russia have stayed but feel scared.

Just a week before the referendum, a deputy head of the Berdyansk city administration and his wife who headed the city election commission were killed in an attack.

Members of the Yellow Band guerrilla group named after Ukraine’s yellow-and-blue national flag have spread leaflets threatening those who cast ballots and urged residents to send photos and video of people who vote to track them down later.

The guerrillas also posted phone numbers of election commission chiefs in the Kherson region, calling on pro-Ukraine activists to “make their life unbearable.”

Ukrainian officials say signs of the referendums’ illegitimacy are all around.

“The Russians are seeing the citizens’ fear and reluctance to vote, so they are forced to take people in,” said Ivan Fedorov, the Ukrainian mayor of the Russia-held city of Melitopol, who was detained and held by the Russians before leaving the city.

“Groups of collaborators and Russians accompanied by armed troops go from one apartment to another, but few people open the doors,” Fedorov said. “The haste with which they organized that pseudo-referendum shows that they weren’t going to even count the ballots in earnest.”

Larysa Vinohradova, a resident of the port city of Mariupol who left the city after the Russian invasion, said that many of her friends stayed because they had to take care of elderly parents refusing to flee. “They don’t stand for Russia, they want Mariupol to be part of Ukraine, and they are waiting for it,” she said, bursting into tears.

Luhansk Gov. Serhiy Haidai, who left the region after it was swept by the Russian forces, said that residents fear that the Russians will round up more men in the region for military service following Putin’s mobilization order.

“The Russians are using this pseudo-referendum as a pretext for armed people to visit apartments and search for any remaining men to mobilize them and also look for anything suspicious and pro-Ukrainian,” Haidai told The Associated Press.

“The swift Ukrainian counteroffensive has scared the Russians,” he added.

Analysts say Putin is hoping to use the threat of military escalation to force Ukrainian President Volodymyr Zelenskyy into negotiating with the Kremlin.