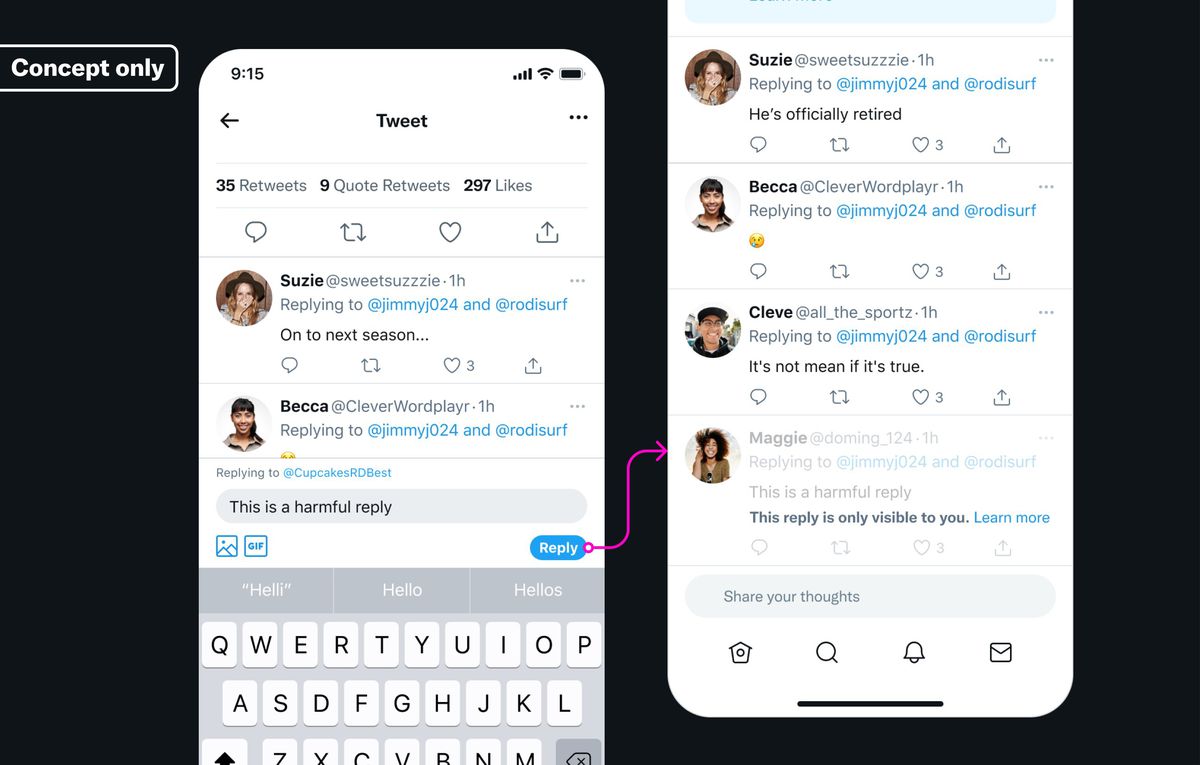 Twitter is looking for input on two new potential features that could give users more control over the tone and quality of replies to their tweets. Filter and Limit, as shared by Twitter designer Paula Barcante, would intelligently hide offensive or harmful replies or prevent repeat offenders from replying at all.

Based on the concept images Barcante shared, Twitter would detect whether or not you’ve received harmful replies and then prompt you to turn on Filter or Limit. “If you have Filter on, potentially harmful replies to your Tweet wouldn’t be shown to you or anyone else,” Barcante writes. With Limit enabled, accounts with a history of offensive or “repetitive, uninvited tweets” would be prevented from replying at all.

Twitter’s concept is fairly upfront about whether or not you have Filter or Limit enabled. In the case of filtered tweets, they still appear for the person replying, with added text that says: “This reply is only visible to you.” For accounts with Limit enabled, Twitter would show a warning explaining that “Reply limit is on” with a link to learn more.

Now since this — entirely hypothetical — process is automated, it’s bound to not be accurate all of the time. Barcante notes that Twitter is also considering letting users review the tweets that get caught in either feature’s net in case the user disagrees with Twitter’s automated decision and wants to correct it.

In terms of features Twitter has experimented with as of late, Filter and Limit definitely sound more useful than, say, Fleets (RIP). It’s easy to imagine enabling those settings could largely prevent the racist abuse highly visible users can experience on the platform. Twitter’s also looked at other ways to protect users’ experience, like adding the ability to hide old tweets or select who will see a tweet before you send it.

Like many of Twitter’s experiments, these all sound like great ideas; now, they actually need to be implemented. Barcante didn’t give a timeline for when that might happen.