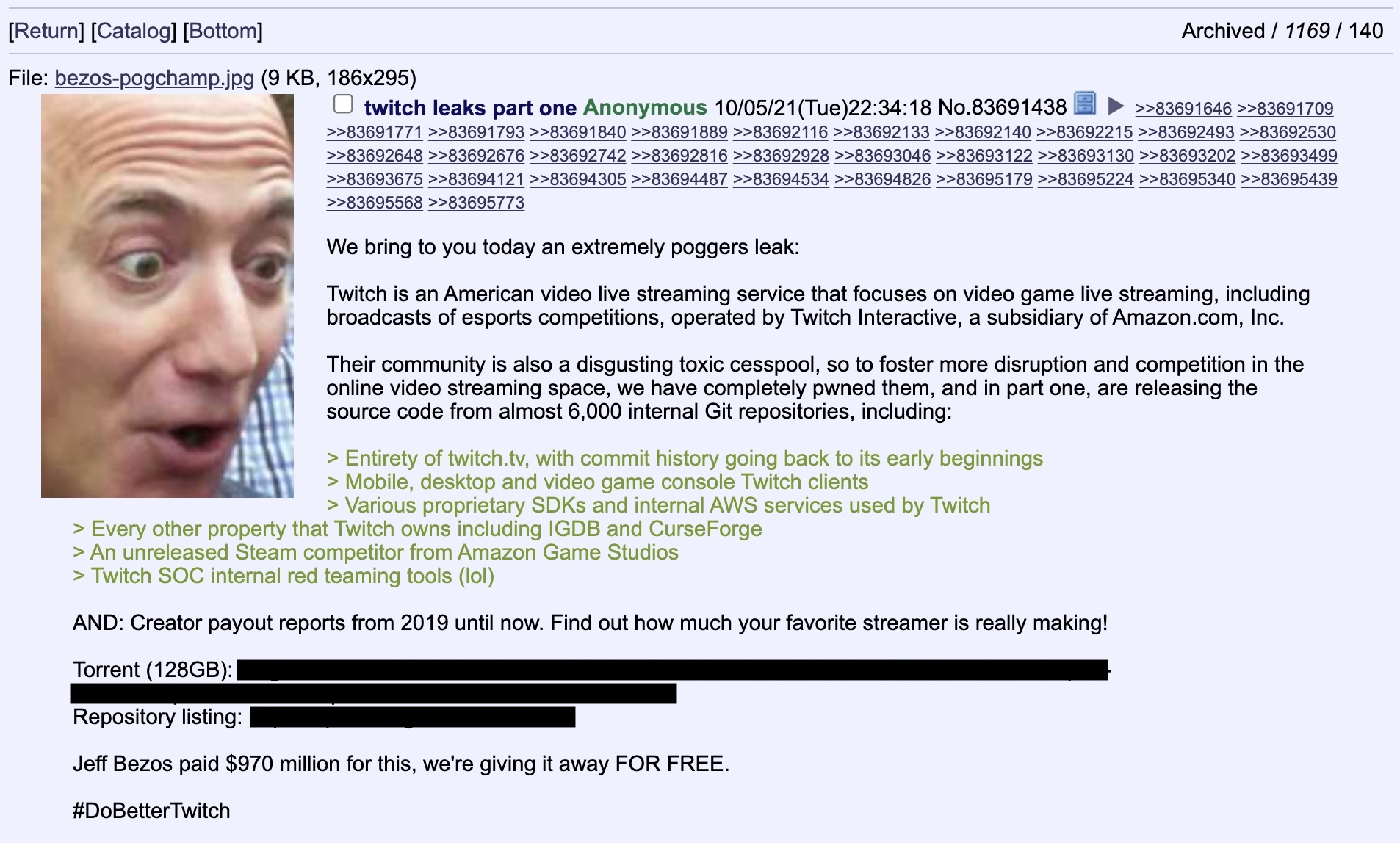 Twitch confirmed yesterday that a massive cache of internal data, including creator payouts, was published online after a breach. The streaming platform said in a blog post that the leak was caused by an error in a Twitch server configuration change, which was then accessed by a malicious third party. For many streamers, this leak exacerbates existing tensions over pay transparency in streaming and safety on Twitch.

These leaks follow a rocky few months for the Amazon-owned platform, which — as of earlier this year — represented 72.3% of live video game streaming viewership, remaining dominant over platforms like Facebook Gaming and YouTube Gaming. After marginalized creators were repeatedly targeted by hateful bot attacks, some streamers rallied the community to boycott the platform on September 1 for #ADayOffTwitch, which caused the platform’s peak concurrent viewership to drop 1 million viewers below average. Though Twitch has added new safety features since, tensions remain high in the community.

“I think it was only a matter of time that something like this would happen,” said Lucia Everblack, a transgender streamer who was one of the organizers of the #ADayOffTwitch boycott. “It’s been kind of apparent that safety and security was never at the forefront of what Twitch was doing to begin with.”

The leak included data like source code, proprietary software development kits (SDKs) and an unreleased Steam competitor from Amazon Game Studios. But Everblack, a software engineer by day, thinks that the leak of creator payout data only affirms her feeling that Twitch’s priority is to cater to the streamers that bring in the most money. According to a Reddit post analyzing the leaked streamer data from 2019 to the present, 10% of the top 10,000 streamers comprise 49% of total streamer earnings on Twitch. About 2,000 streamers made over $100,000 on Twitch in that period.

“They’re basing all of their features solely on that, but the rest of the platform can’t really grow,” she told TechCrunch. “It’s just such a huge deterrent for anyone else, especially those who are BIPOC, LGBTQI+ or disabled.”

Scott Hellyer, a Twitch Partner who has streamed as tehMorag for over nine years, also feels that Twitch prioritizes its top-earning users.

“Across Twitch as a whole, discovery has always been an issue,” Hellyer told TechCrunch. “YouTube has a really cool algorithm — they help find a way to get you connected with people that want to watch your content, and on Twitch, they’ve been trying, but it doesn’t feel like they’re trying enough. Now, people are like, ‘Oh, no wonder they don’t want to improve discovery, they just shove people into the top streams, because they’re already making the money that they need for Twitch.’ It’s a good return on investment, which is understandable.”

Per the leak, the majority of the top streamers are white men, reflecting a larger lack of diversity in the gaming industry — the highest paid woman streamer on the list, Pokimane, is only 39th. But more discoverability features could help Twitch amplify more diverse creators. Everblack and other marginalized streamers pushed for Twitch to add identity-based tags to streams so that users could seek out diverse creators to support. Twitch added these tags in May, and before that, Everblack founded Peer2Peer.live, an opt-in discoverability tool for marginalized streamers and viewers to find each other. Some users worry that these tags helped bad actors find targets for hate raids, but Everblack said that she’s seen huge growth from the tags. In the meantime, it’s on Twitch to protect these users from the potential for targeted attacks, which so far, it has done by adding phone-verified chat features.

But even once a streamer builds an audience, it’s a challenge to make substantial income on Twitch, despite what the top earners might receive. When a streamer gets popular enough, they might apply to join the Twitch Partner program, which offers creators more tools and monetization options. But multiple streamers TechCrunch spoke to consider it an open secret that not all Twitch Partners have the same pay structure — in 2017, Insider reported that “Partners receive a 20/80 to 60/40 split on subscription revenues depending on how popular they are.” Though it’s standard for Twitch Partners to split their subscription earnings 50/50 with Twitch, some streamers claim that nowadays, big-name creators have managed to negotiate more beneficial 60/40 or 70/30 payouts, which matches up-and-coming YouTube Gaming’s default payout. Some popular streamers like CouRage, DrLupo, and Valkyrae have even left Twitch to take exclusive deals with YouTube.

Jess Bolden, who streams as JessGOAT, told Input, “If I compare the amount of LGBTQIA+ and women streamers who have a 50-50 split with Twitch compared to the men, who probably have a 75-25 split with ad agreements — which I don’t have — we’re about to have a big fucking issue.”

Hellyer posted on Twitter after the leak that he has always wanted to talk more about his pay on Twitch, but his Partner contract prevented him from doing so.

On the plus side, I have always wanted to talk about and disclose in-detail of my own payout info but contract barred me from such – The info is out there now~

“So far in the leak, they don’t really talk about any of the splits or different types of contracts, but I am sure that now that we have these raw numbers out there, really smart people can figure out what is the CPM (cost-per-mile, the amount paid per 1,000 views of an advertisement) of some of these streamers, are they getting a better cut on their Bits, are they getting a better cut on their subscription revenue as well too, because there are different sites that will track all that information, minus this part of the equation: how much money are they making from it,” Hellyer told TechCrunch. “We can’t talk about the actual money we make, but we can give an arbitrary value, like how many subscribers we have. But there’s no transparency there. My subscribers don’t know if I have a 50-50 split.”

In the tech industry, there have been larger movements to establish greater pay transparency, which holds companies accountable to make sure that, for example, two engineers with the same job responsibilities aren’t being paid vastly different salaries.

“Twitch is reflective of society,” RekItRaven told TechCruch. Raven led the #ADayOffTwitch boycott and started the #TwitchDoBetter hashtag. “We’re not supposed to talk about pay or money, but there’s never been a good reason why.”

But the Twitch payout amounts are more complicated than a list of how much a tech company pays each of its engineers — Twitch sets the terms of its Partners’ contracts, but not all channels are created equal.

Critical Role topped the list of the highest paid streamers, allegedly making $9,626,712 since August 2019; in second place was xQcOW, making $8,454,427. But the costs for a show of Critical Role — a Dungeons & Dragons show with 31 team members — would be more significant than those for xQcOW, an eSports streamer. Plus, not all streamers get the same percentage of their total revenue from Twitch — many creators have sponsorship deals, Patreon pages, direct donations and other projects that help them vary their income streams.

“Twitch is only 40% of my actual revenue,” Hellyer said. “I had to diversify to make sure that when stuff like this happens, I’m going to be okay, hopefully.”

Everblack said she worried that smaller creators will receive more flack over their leaked payout numbers than those who are making millions. She thinks Twitch would be better for marginalized creators, leak or not, if Twitch implemented more community-driven features to help smaller streamers feel safer while growing their channels. She suggested adding ways for streamers to reward viewers for being great community members, or tools for big streamers to send out smaller raids to multiple streams, rather than dropping thousands of people onto one unsuspecting streamer.

“Marginalized voices in the Twitch community matter so much, and I think that if Twitch were to actually honestly bring them in and listen to them, a lot of these situations they keep running into could be avoided, and they can also proactively add in features that actually do benefit people,” Everblack said. “I think that they’re so focused on just the small group of large creators that they’re absolutely missing out on a whole huge network of people that aren’t even on the platform yet, because they only really care about white men gaming.”