Trump Mar-a-Lago search: A look at what’s next for intel review of documents? 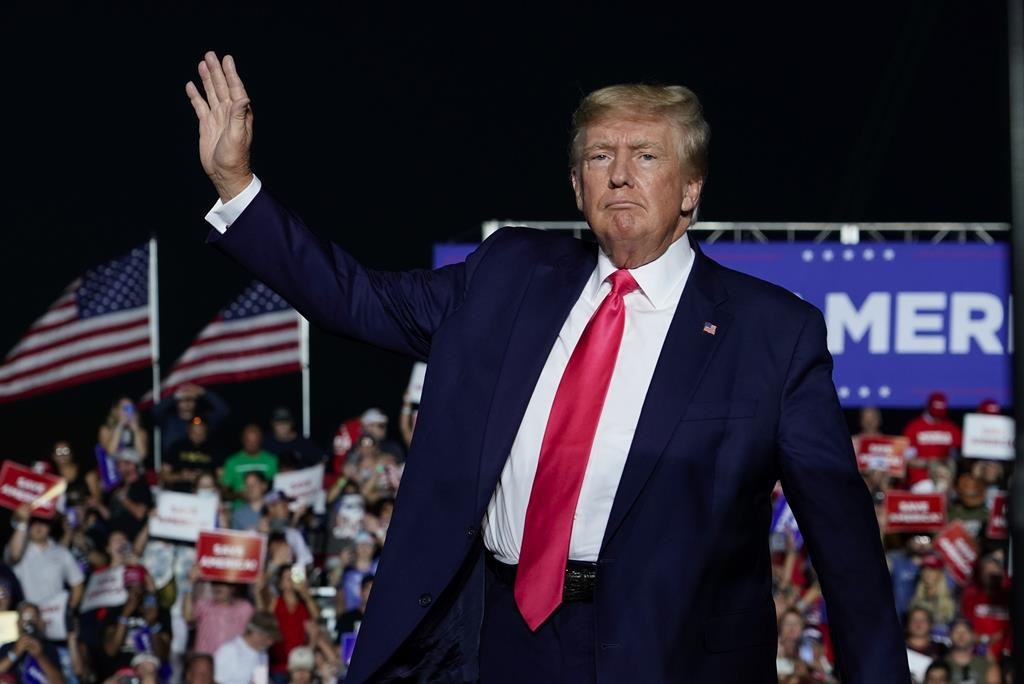 The discovery of hundreds of classified records at Donald Trump’s home has thrust U.S. intelligence agencies into a familiar and uncomfortable role as the foil of a former president who demanded they support his agenda and at times accused officers of treason.

While the FBI conducts a criminal investigation, the office that leads the intelligence community is also conducting a review– currently on pause pending a court order– of the damage that would result from disclosure of the documents found at the Mar-a-Lago estate in Palm Beach, Florida.

The investigation comes at a perilous time in American politics, with increasing threats to law enforcement and election workers and as a growing swath of officials assail the FBI and spread baseless theories of voter fraud. There’s already a wide range of speculation about what was in the documents, with some Democrats pointing to reporting about possible nuclear secrets while some Trump allies suggesting the case is a benign argument about storage.

So far, the U.S. Office of the Director of National Intelligence has proceeded cautiously, issuing no public statements and declining to answer questions about the review’s structure or how long it will take.

A look at what’s known and expected:

Not a formal ‘damage assessment’

According to the government, the documents seized at Mar-a-Lago and papers the Republican former president had turned over previously included highly sensitive “Special Access Program” designations as well as markings for intelligence derived from secret human sources and electronic signals programs. Those forms of intelligence are often produced by the CIA or the National Security Agency, and the underlying sources can take years to develop.

The ODNI review will try to determine the possible damage if the secrets in those documents were to be exposed. It has not said if it’s investigating whether documents already have been exposed.

Avril Haines, the director of national intelligence, confirmed the review in a letter to the chairpersons of two House committees. Haines’ letter says the ODNI will lead a “classification review of relevant materials, including those recovered during the search.” Experts say that could include non-classified papers with notes written on them that might reference classified information.

Haines’ letter also says her office will lead an assessment of “the potential risk to national security that would result from the disclosure of the relevant documents.”

That’s different from a formal “damage assessment” that intelligence agencies have carried out after high-profile breaches like the disclosures of programs by former National Security Agency contractor Edward Snowden.

Damage assessments have specific requirements under intelligence community guidelines published online, including an estimate of “actual or potential damage to U.S. national security,” the identification of “specific weaknesses or vulnerabilities” and “detailed, actionable recommendations to prevent future occurrences.”

Under those guidelines, the National Counterintelligence and Security Center, a subsidiary within the ODNI, would lead a damage assessment. The center is led by acting Director Michael Orlando as President Joe Biden has not yet nominated a chief counterintelligence executive.

It’s unknown whether the intelligence review will include interviewing witnesses. Haines’ letter says the ODNI will coordinate with the Justice Department to ensure its assessment does not “unduly interfere” with the criminal investigation.

For now, the Justice Department has said the ODNI review is paused after a federal judge barred the use of records seized at Mar-a-Lago in a criminal investigation. “Uncertainty regarding the bounds of the Court’s order and its implications for the activities of the FBI has caused the Intelligence Community, in consultation with DOJ, to pause temporarily this critically important work,” attorneys for the government said in a court filing.

The answers could be unsatisfying

The results may not come for weeks or months, and full findings will likely remain classified.

Lawmakers in both parties are calling for briefings from the intelligence community. None is known to have been scheduled.

Former officials note that it’s often difficult for agencies to diagnose specific damage from an actual or potential breach. Given the political climate and the unprecedented nature of evaluating a former president, the ODNI is widely expected to be limited and precise in what it says publicly and privately to Congress.

But reviews like the one underway often help top officials and lawmakers better understand vulnerabilities and how to manage risk going forward, said Timothy Bergreen, a former Democratic majority staff director for the House Intelligence Committee.

“No healthy organization or society can exist without comprehensive review of its mistakes,” Bergreen said. “That’s always been a democracy’s big advantage over authoritarians.”

An office created after Sept. 11

Lesser known than many of the agencies it oversees, the ODNI was created in the reorganization of the intelligence community after the Sept. 11 attacks. Amid revelations that the FBI and the CIA did not share critical information with each other, the ODNI was intended to oversee the 18-member intelligence community and integrate the different streams of collection and analysis produced by different agencies.

The ODNI supervises the drafting of the President’s Daily Brief, the distillation of top American intelligence provided to Biden and top advisers daily. Haines is the president’s principal intelligence adviser and often briefs Biden in the Oval Office along with other national security leaders.

Trump went through three directors of national intelligence in his last year, part of his long-running battles with the intelligence community.

Some of his top officials were accused of selectively declassifying information for political purposes. And before, during and after his time in office, Trump has accused intelligence officials of selectively leaking material to undermine him or not being sufficiently loyal.

He was incensed by the long-running investigations into allegations of Russian influence on his 2016 campaign, calling them the “greatest political CRIME in American History.” And he excoriated the person who spoke to a whistleblower about his pressuring Ukraine for derogatory information, saying that person was “close to a spy” who could have committed treason.

Under Biden, Haines and other top officials have been involved in declassifying information about Russia’s war plans against Ukraine. They have also faced questioning about overly optimistic assessments of Afghanistan prior to the fall of Kabul.

Michael Allen, a former Republican majority staff director of the House Intelligence Committee, said the ODNI is uniquely positioned to handle such a closely watched review.

“This, I think, is one of the reasons why you have a DNI, to coordinate across the wide and disparate community of intelligence agencies,” said Allen, author of “Blinking Red,” a history of the post-Sept. 11 intelligence reforms. “This is their bread and butter.”