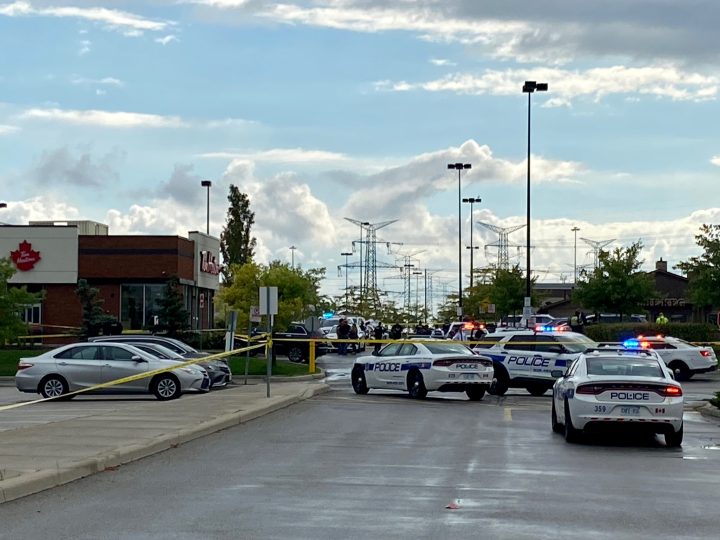 Toronto police are mourning the loss of an officer who was shot in Mississauga on Monday while taking a break from a training exercise.

Toronto Police Services named Const. Andrew Hong, a member of the force’s traffic services division, as one of two victims killed by a shooter in Peel and Halton regions on Monday afternoon.

“This is devastating news for his family and for all members of the Toronto Police Service and our entire policing community,” Toronto police chief James Ramer said in a statement.

That shooting, which police said also left a second person with “life-altering injuries,” was the first of several apparently connected scenes on Monday.

Police said they believe the same suspect was responsible for a shooting soon after in Milton, Ont., which left one person dead and two more injured.

Police in Halton Region, which includes Milton, said Monday afternoon they had a suspect “in custody,” but police in the neighbouring city of Hamilton later said the suspect was shot and pronounced dead in the Hamilton Cemetery.

1:19
One victim from Mississauga shooting taken to Toronto hospital

One victim from Mississauga shooting taken to Toronto hospital

Hong is survived by a wife, two children and his parents, police said.

The 22-year veteran of the Toronto police force was in Mississauga on Monday to participate in a joint training exercise with officers from Toronto, Peel and York police.

At a press conference on Monday evening, Peel police chief Nishan Duraiappah said he was on a lunch break when the suspect engaged in an “unprovoked and … ambush(ed) attack.”

“I committed to his family that they will have the full support of the Toronto Police Service every day going forward,” Ramer said.

2:35
Suspect arrested after deadly shootings in Mississauga and Milton

Suspect arrested after deadly shootings in Mississauga and Milton

Jon Reid, the president of the Toronto Police Association, said losing a colleague in the line of duty has a “rippling effect across our membership, across the broader policing community and our city.”

The death was also commemorated by Toronto Mayor John Tory who issued a statement saying he was “heartbroken” at the news.

“My thoughts are with Const. Hong’s family, his friends and the entire Toronto Police Service who I know are grieving right now after the loss of one of their own,” Tory said.

“Today, we are sadly reminded of the danger our officers face on a daily basis as they work to keep us all safe.”

“May Constable Andrew Hong rest in peace. A husband, father and hero, he and his loved ones are in my prayers,” he said.