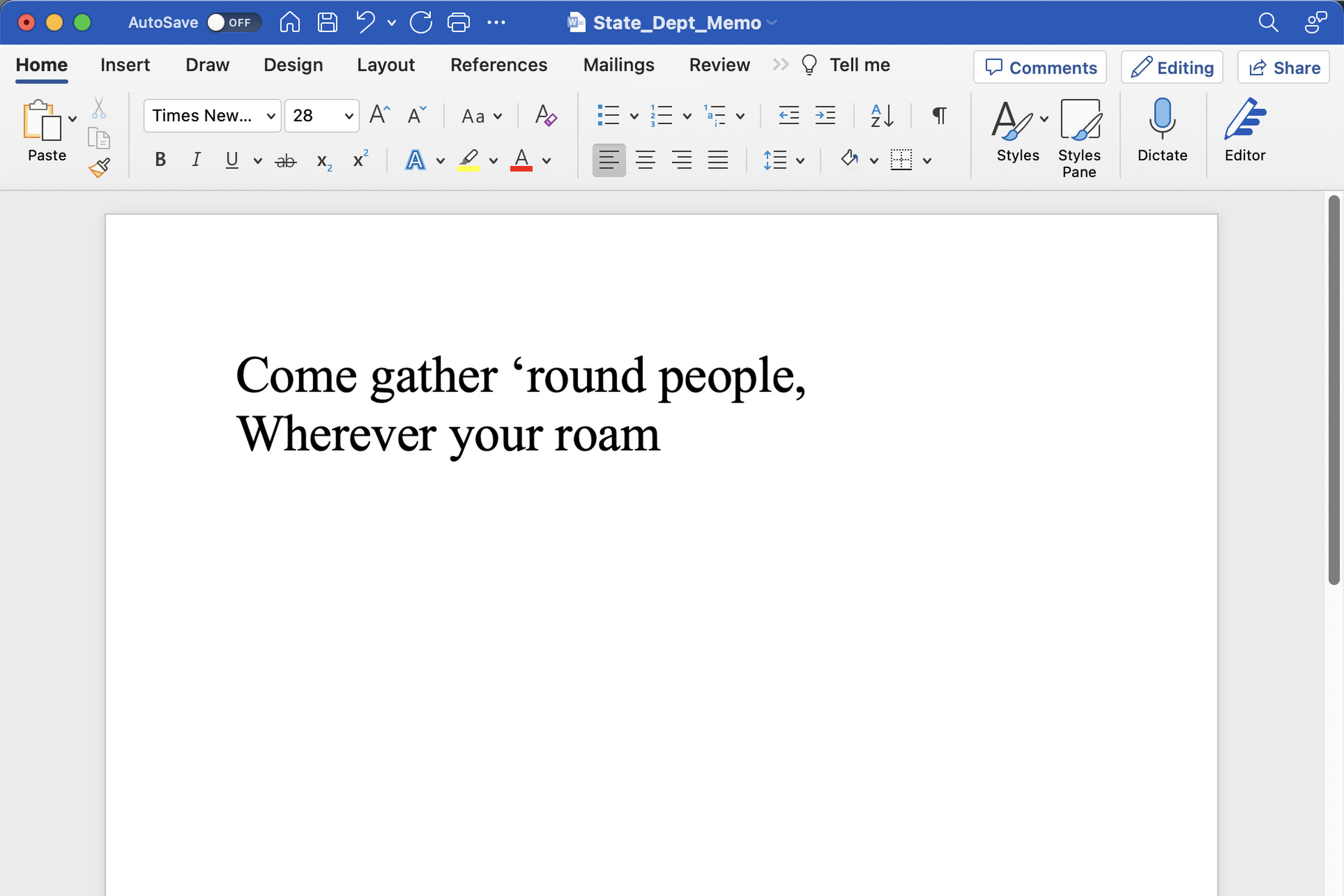 The Secretary of State is asking for a font change to improve accessibility and readability. People have feelings.

The State Department is changing with the times. According to a report from The Washington Post, employees have been directed to use 14-point Calibri when writing certain documents instead of the traditional Times New Roman. The mandate is set to go into effect in February.

In a memo cheekily titled “The Times (New Roman) are a-Changin,” Secretary of State Antony Blinken reportedly told employees that the change is meant to make documents more accessible, saying that Times New Roman’s serifs could “introduce accessibility issues for individuals with disabilities who use Optical Character Recognition technology or screen readers.”

There’s some merit to the idea. Fonts with serifs, described by Blinken as “‘wings’ and ‘feet’” added to letters, can make small, printed text easier to read, according to Adobe, and may also “look authoritative, professional, and suggest the weight of history or experience.” But in an age when a lot of reading is done on screens, the flourishes might have some drawbacks — accessibility documents from both the University of North Carolina at Greensboro and Penn State say that sans serif fonts are considered to be more readable when viewed on a computer, though the rules aren’t exactly hard and fast. It’s also worth noting that there are fonts specifically designed to be accessible, which are quite different when compared to Calibri or other similar sans serif fonts.

The change has apparently sparked a fair amount of discussion at the department; one Foreign Service officer told the Post that they were “anticipating an internal revolt,” while another employee said that the font had both strong supporters and mild detractors. That’s not necessarily a surprise, as people often have a lot of Feelings about fonts. The way something looks while you’re writing it can genuinely have an impact on the experience; I remember that there was a fair amount of celebration here at The Verge when our redesign introduced a serif font (though the software we use to write them still uses a sans serif font, in case you were wondering).

Despite the complaints and headlines from certain outlets that imply that the State Department is ignoring bigger problems to push for accessibility, it seems likely that this will mostly be a non-issue by March. Changing a word processor’s default font is trivial, and I genuinely think that most people reading documents that use the new style will at least appreciate the font’s size. A few years ago, I decided that I would switch to using a 16-point font in pretty much every writing app on my computer, and I haven’t regretted it for a second; I’d even recommend that most people try it out for a day or two just to experience what it’s like to use a bigger font.

Still, I wouldn’t blame State Department employees if they wanted to pour one out for Times New Roman. It’s a font that’s been around the block, being invented in the 1930s for British newspaper The Times, and shot to digital popularity when Microsoft made it the default in Word for around a decade. With Office 2007, though, Calibri replaced it as the default — unless, of course, you manually set it back to Times New Roman, something I assume was very common in the State Department, which has apparently been using Times New Roman since 2004. (Calibri itself is set to be replaced at some point, though as far as I can tell, it’s currently still the default.)

PS: I don’t want to hear about fonts vs. typefaces; I know the difference and do not care because I want the average reader to actually understand what I’m talking about. But I will recommend that any pedants read Ars Technica’s writeup because it is delightful.