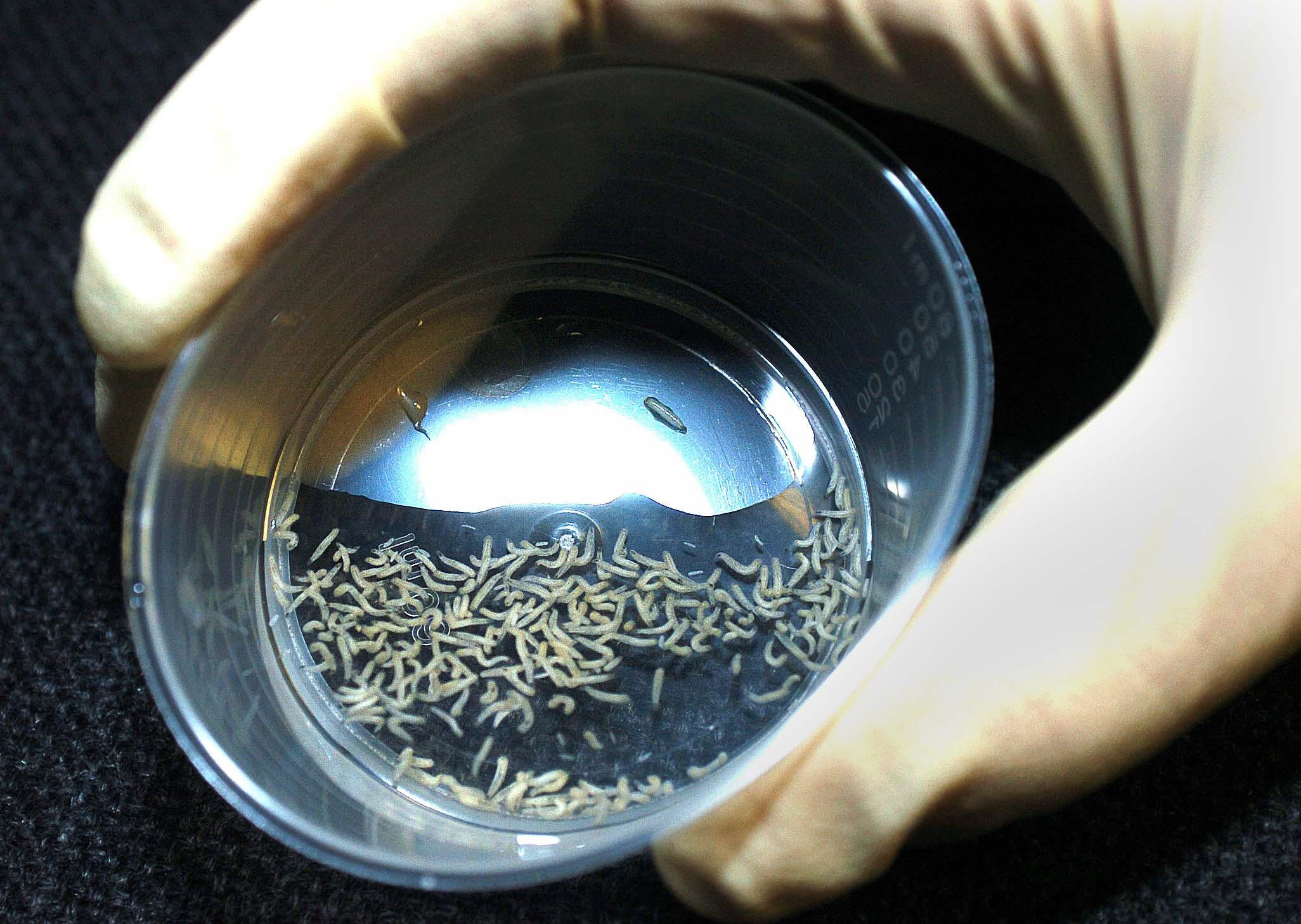 Maggots have become unlikely but effective helpers in treating chronic wounds such as diabetic leg ulcers to speed up the healing process.

‘Maggot therapy’ has been available as a prescribed NHS treatment since 2004 after the US Food and Drug Administration (FDA) approved maggots as a ‘medical device’.

BioMonde, a company based in Bridgend, South Wales, has been a pioneer in larval therapy, by growing greenbottle fly larvae in their labs.

Unlike the maggots you’d find crawling in your dustbins, these clinically maggots are put into finely woven, teabag-sized, net pouches that are then placed on patients’ wounds for four days.

The maggots work their magic through the material and the bags are removed before they turn into flies.

BioMonde supplies more than 5,000 treatments to about 250 NHS hospitals every year and up to 15,000 in the rest of Europe.

Each order is made to prescription, on a named patient basis, and is typically delivered the next day.

How does ‘maggot therapy’ work?

The treatment is most commonly offered by the NSH to treat gangrene.

As larvae feed on dead tissue in a wound, they release chemicals that break down dead tissue into a liquid that they drink, according to Chelsea and Westminster hospital, which offers the therapy.

When applied to the wound, the larvae are the size of an uncooked grain of rice, and grow to around 10-12mm during treatment. They cannot bite, since they do not have teeth and they cannot multiply.

‘People are shocked at how effective it is,’ Vicky Phillips, clinical lead at BioMonde told The Guardian.

‘You do get a surprise when you take [the pouch] off on day four and see how much cleaner the wound looks,’ said the former tissue viability nurse at Hampshire Hospitals NHS.

Maggots are also cost-effective, with one pouch costing about £250, depending on the size.

The speed with which maggots clean wounds saves a lot of nursing time and potentially the cost of surgical debridement (the medical removal of dead tissue) and could help avoid amputations.

For people who can’t get over their squeamishness, BioMonde is also exploring how to offer larval therapy without the presence of maggots by harvesting the up to 50 enzyme secretions produced by the insects.

What is ‘antibiotic resistance’?

Antibiotic resistance is when drugs becoming less effective due to overuse. The first case of penicillin resistance was observed in 1947.

Treating wounds with maggots can be traced back centuries to the Mayan tribes in Central America and Indigenous Australians.

During the first world war, a US doctor named William Baer started treating patients with larvae grown on his hospital windowsill after discovering that wounds with maggots in them healed much faster than those without.

Maggot therapy gained popularity in the US and Canada in the 1930s, but it’s use declined with the arrival of penicillin and other antibiotics.

Now, the treatment has proved to be an effective alternative with the rise of antibiotic resistance.


MORE : Morbidly obese teen ‘was found dead with maggots and flies on her body’