The laptops I’m most excited to test in 2023 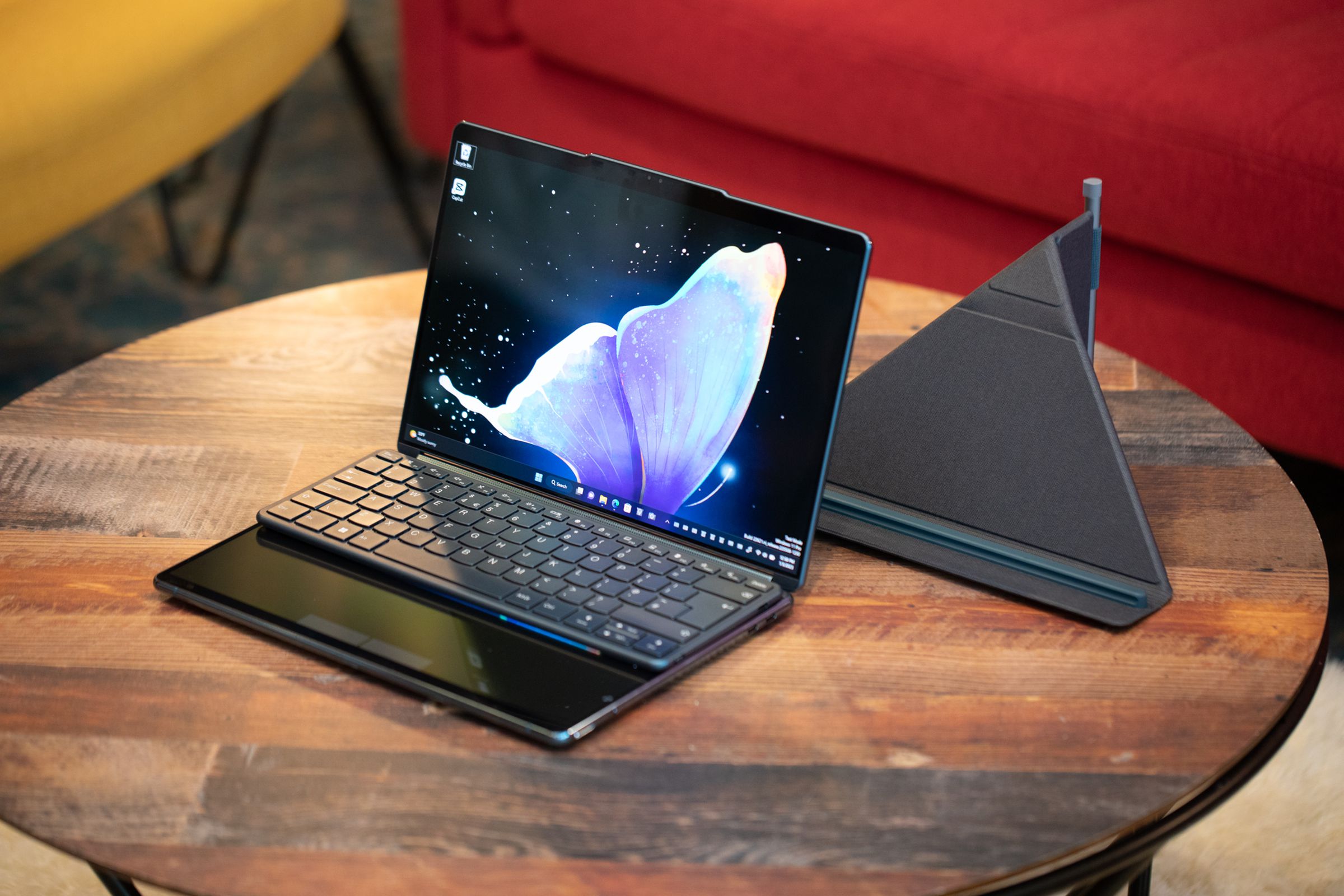 From dual screens and hidden touchpads to 18-inch gaming behemoths and RGB Chromebooks, here are this year’s most exciting upcoming laptops from Lenovo, Razer, LG, and more.

It’s going to be an interesting year for laptops. We’re coming out of CES 2023, the annual trade show where the tech industry shows off the products we’ll be seeing hit shelves throughout the upcoming year. Big players, from Dell and HP to Razer and MSI, unveiled their weirdest and wackiest new products. There’s a lot to look forward to this year when it comes to display technology, chip capability, AI features, build, and more. But a few products really stood out from the rest.

In no particular order, here are the laptops that I’m most excited about testing in 2023.

Various companies have been trying to do funky dual-screen and foldable laptops for years on end. Asus has all kinds of Duo models, and Lenovo’s tried foldable ThinkPads a couple of times. But the Yoga Book 9i, a 13-inch OLED laptop with a screen on the top and a screen on the bottom, bridges the gap between these two form factors — and I’m convinced that it might be the best possible version of both.

While this foldable form factor isn’t new, what’s really impressive is the rigorous system of gesture controls that Lenovo has installed to make this thing usable. With various combinations of taps and swipes, you can pop windows to one screen or the other, expand them to fill them both, conjure a haptic keyboard and touchpad, snap to various layouts, and much more. It’s a lot of fun to use and was easy enough to get the hang of in my short demo period. But we only had time to scratch the surface of the various tricks this device has up its sleeve — and I’m very much looking forward to seeing how it works as a daily driver.

I’ve been using Razer Blades for years, and they all offer a similar package. While sizes vary, Blades have a signature look and feel — they’re thin, sleek, professional, and polished, with vibrant green logos and classy RGB keyboards.

But the upcoming Blade 16 will take the display to the next level. This device will feature a Mini LED display (which uses many clusters of local dimming zones that can brighten or darken independently — as opposed to a standard LCD display, which projects its image with a single group of lights). I’m excited to see how much that impacts the visual experience and how games like Microsoft Flight Simulator look with all those teensy diodes behind them.

I’m also interested to try the dual-mode screen feature, which can auto-toggle the screen between 1920 x 1200 / 240Hz and 4K / 120Hz profiles. And I’m curious whether this is a feature I’ll actually end up using in my daily life once I get a feel for it.

LG Grams of the past have been exceptionally light computers with exceptional battery life — but they’ve also tended to look kind of boring. The upcoming LG Gram Style aims to break that mold.

This might be one of the prettiest laptops being released this year. It’s covered in an iridescent finish that changes color under different light. (I’d describe it as a silvery-gray if pressed, but it looked blueish and orangeish at various times during my demo.) The trackpad is hidden but illuminated by some sleek-looking LEDs when pressed. The screen is a 2880 x 1800 OLED panel, and it looks great. And of course, the chassis is mind-blowingly thin and light.

The Gram Style is a bold new laptop design. I’m excited to see how it looks in the real world outside of LG’s very dimly lit CES booth.

It is apparently the year 2011 again, and companies are once again trying to make glasses-free 3D a thing. One of these companies is Asus, which unveiled its ProArt Studiobook 16 3D this month. This is a beefy, powerful workstation aimed at content creators, and its display is able to, using eye tracking and a lenticular lens, produce a 3D image without requiring glasses.

In the limited demo we got, the 3D technology did work. There were certainly glitches here and there, especially when I had to move my head, but it was functional and fun to use.

I’m certainly excited to try this outside of the limited demo we got. But I’m more interested to see whether people actually buy this. The most obvious use case is professionals who work with 3D — but as designers have pointed out to me before, heavy work of that sort is often done on a desktop. I’m curious how Asus plans to market this, who it’ll be marketing it to, and whether it’ll be at all successful.

This is another machine that isn’t quite my cup of tea, but I’m curious to see whether it will find a footing. It’s a ThinkBook with a screen that can swivel around 360 degrees. The front is a regular 13.3-inch 60Hz OLED and the back is a 12-inch E Ink 12Hz touchscreen. This is, to be clear, a very slow screen. But the idea is that you could use it for reading and writing and save a ton of battery life while using the OLED side for the rest of your workday.

We’ve got some E Ink fans on the Verge staff, and I know it’s a technology with a devoted user base. The success of this device may give us clues about just how enthusiastic this crowd is and whether there’s a future for E Ink on laptops at all.

Just look at this thing. It’s huge. It’s an 18-inch monstrosity of a gaming laptop. It’s a literal inch thick, and I don’t even want to know how much the power brick weighs.

Inside, it will contain Intel’s monstrous 13th Gen HX CPUs, with a whopping 250 watts of total system power. There’s an RGB Cherry MX mechanical keyboard, if you’re into that, but the rest of the design is pleasantly understated.

But mainly, y’all, this thing is gigantic. I can’t wait to play a game on it and just have the game be, like, everywhere. And in an era where many people are demanding that laptops sacrifice everything in the name of thinness and lightness, I’m happy to see that at least some models aren’t afraid to stay massive.

I’m not even going to pretend there’s another reason. It’s a Chromebook with colorful little lights. This thing isn’t even out yet, and I already know multiple people who have sworn that they’re going to buy it as soon as it arrives. Go for it, folks. Godspeed.