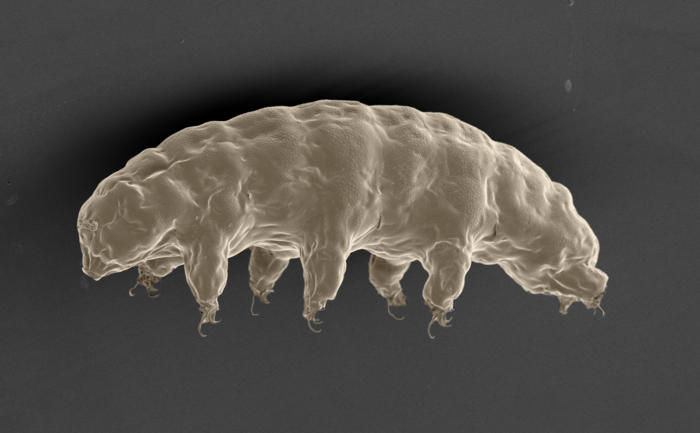 From the highest mountains to the bottom of the sea, tiny animals called tardigrades can be found all over the planet.

These lichen-dwelling creatures are famous among scientists for their ability to survive extreme conditions like intense impacts and incredibly low temperatures.

‘Everything about tardigrades is fascinating. The extreme range of environments some species can survive leads us to explore never-before-seen mechanisms and structures,’ said University of Tokyo associate professor Takekazu Kunieda.

‘For a biologist, this field is a gold mine.’

Some tardigrade species are even able to survive without water — essential to all living beings — for years and ‘potentially for decades’, he added.

But how exactly do they do it? Kuneida colleagues from the University of Tokyo think they might finally have found out.

Tardigrades are tiny animals found everywhere from mountaintops to rainforests and even deep in the sea. When fully grown, they measure about  0.5 mm (0.020 in) in length.

Also known as water bears and moss piglets, their name comes from the word ‘Tardigrada’, which means ‘slow steppers’ in Latin.

Scientists are fascinated by them because they have an amazing ability to survive.

The microanimals can weather subzero temperatures, high doses of radiation and extremely high pressure. They’ve even survived in space!

‘The trick is in how their cells deal with this stress during the process of dehydration,’ he explained.

Researchers have long thought some kind of protein must help tardigrade’s cells stay strong without water. Without this, they would collapse in on themselves when dehydrated.

Kuneida and team tested several kinds of protein to see which might be responsible for this process.

They discovered that proteins unique to these creatures — ‘cytoplasmic-abundant heat soluble (CAHS) proteins’ — were able to protect their cells.

The proteins form a gel during dehydration that stiffens into a network of filaments that support the cells as they dry out. When the cells rehydrate, these filaments gradually recede, preventing stress.

The team were even able to reproduce this process — albeit on a more limited scale — when they applied the proteins to cultured human cells.

Improving human survival by studying tardigrades is still the stuff of science fiction. But the researchers say their work could have more practical uses.

With further study, scientists might be able to find ways to extend the shelf life of research materials, medicines and maybe even organs needed for transplants.

Team member Tomomi Nakano emailed Kuneida when she first observed the protein filaments in human cultured cells. It was late on New Year’s Day 2019: a moment he says he will never forget.

‘She had been working late trying to see the condensation of CAHS proteins and observed the first CAHS filament networks in human cultured cells,’ he said

‘I was astonished at seeing such clearly defined microscopic images of these. It was the first time I had seen such a thing. It was a very happy new year indeed!’

The research was published this week in PLOS Biology.


MORE : Fisherman survives by floating in freezer for 11 days after boat began to sink in ocean


MORE : Casper the ghostly octopus has kept scientists enthralled since 2016