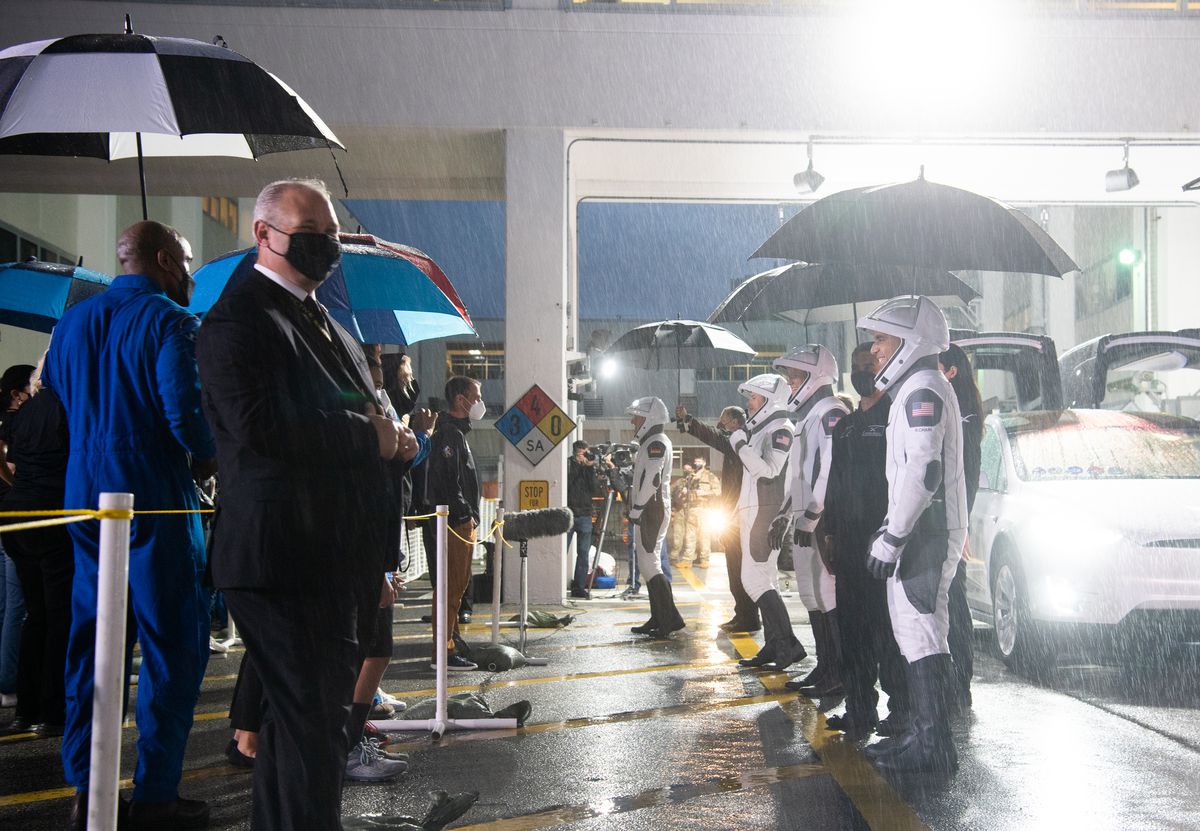 This evening, SpaceX successfully launched another crew of four on their way to the International Space Station, marking the fifth time the company has sent people to space. Riding inside SpaceX’s Crew Dragon capsule, the spacefarers will now spend roughly the next day in orbit lapping the Earth, before docking with the ISS.

The mission, called Crew-3, is carrying three NASA astronauts — Raja Chari, Tom Marshburn, and Kayla Barron — and one German astronaut, Matthias Maurer of the European Space Agency. After a number of launch delays, the foursome finally took off from NASA’s Kennedy Space Center in Cape Canaveral, Florida at 9:03PM ET, launching on top of one of SpaceX’s Falcon 9 rockets. After successfully boosting the Crew Dragon carrying the passengers into low Earth orbit, the Falcon 9 then turned back toward Earth and performed one of SpaceX’s signature rocket landings on the company’s drone ship in the Atlantic.

“Welcome to orbit,” SpaceX mission control said to the crew when they’d separated from the rest of the rocket. “Hope you enjoyed the ride from [the Falcon 9]. Dragon will take you from here. Safe travels.” The launch director also sent his warm wishes to the crew. “It was a pleasure to be part of this mission with you,” he said. “Enjoy your holidays amongst the stars. We’ll be waving as you fly by. Cheers.” Chari responded on board that it was “a great ride, better than we imagined.”

This is SpaceX’s third operational crewed mission for NASA as part of the agency’s Commercial Crew Program. Each mission, including Crew-3, is supposed to last roughly six months, with SpaceX responsible for launching the astronauts and also bringing them home again. The Crew-3 astronauts are slated to come home sometime in spring 2022.

SpaceX’s primary way of getting people to orbit is the Crew Dragon, an automated capsule outfitted with sleek seats and interactive touchscreens. The capsule is also designed to dock automatically with the space station, without the need of input from the crew on board. At around 7:10PM ET tomorrow, November 11th, the Crew Dragon carrying the Crew-3 team will attempt to dock with the ISS, and then about an hour later, the astronauts will open the hatch and enter the station.

There, they’ll be greeted by the three crew members already living on the ISS: NASA astronaut Mark Vande Hei and Russian cosmonauts Anton Shkaplerov and Pyotr Dubrov. Once inside the station, the seven inhabitants will do a short welcoming ceremony around 9:20PM ET. Maruer is officially the 600th person to fly to space, while Barron is the 601st.

The Crew-3 crew just missed out on crossing paths with another batch of astronauts on the space station, though. A crew of four astronauts, part of SpaceX’s Crew-2 mission, left the ISS on Monday, flying back to Earth inside their own Crew Dragon and splashing down in the Gulf of Mexico. Originally, Crew-3 was supposed to launch before the Crew-2 astronauts returned, but a series of delays kept stalling the Crew-3 launch. Eventually, NASA opted to bring the Crew-2 astronauts home ahead of Crew-3.

“Sometimes when you try to fly on Halloween, you get a trick instead of a treat,” Chari told SpaceX mission control ahead of the launch, referencing the fact that their mission was supposed to take place on October 31st. Chari noted it was instead an honor to fly on Veteran’s Day.

The Crew-2 return occurred on Monday, November 8th and the astronauts splashed down just fine. However, one of the capsule’s four main parachutes inflated a little slower than the rest on the way down to the water. The capsule still landed the crew safely, and neither NASA nor SpaceX thought it warranted delaying today’s launch. Additionally, NASA said that the turnaround between the splashdown and today’s launch was the shortest in human spaceflight history.

Ahead of today’s launch, NASA had to do a small maneuver with the ISS first to make sure it didn’t get hit by space debris. Around 3:30PM ET, the thrusters on board a docked Russian Progress vehicle fired up, moving the space station slightly higher and out of the way of a fragment from an old Chinese satellite called Fengyun-1C. The boost paved the way for the Crew-3 team to reach the space station tomorrow safely.