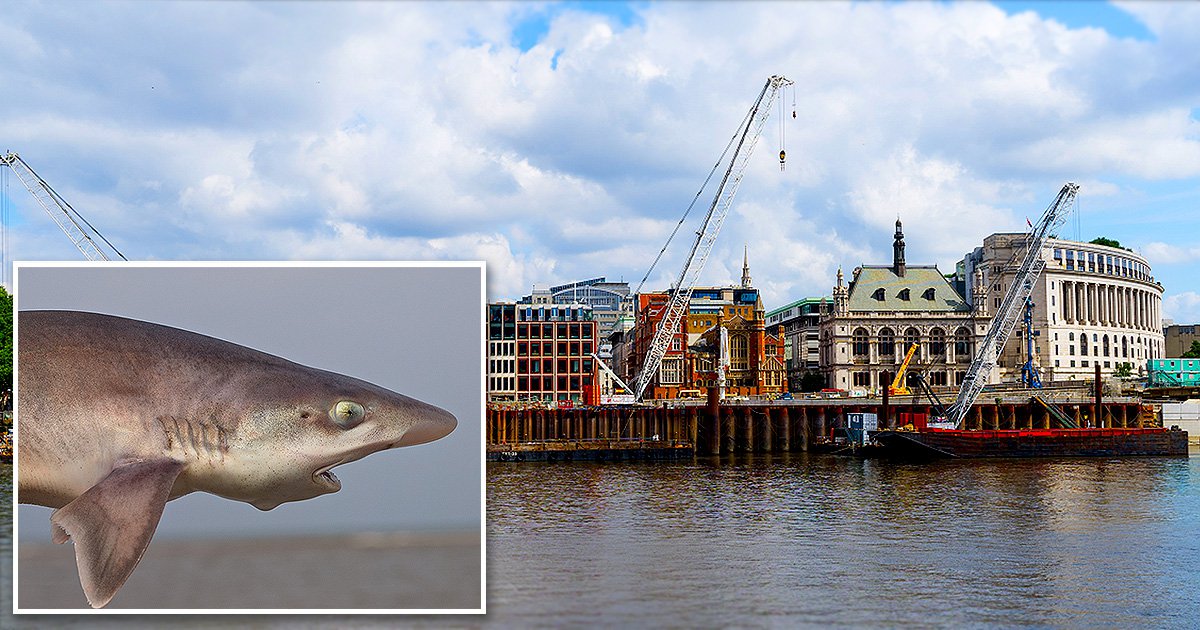 Sharks, seahorses, oysters and seals are living in the Thames, according to the first full ‘health check’ of the iconic river 64 years after it was declared biologically dead.

The exotic creatures that include a venomous shark, the Spurdog, have moved in following a conservation drive, say scientists.

The river – declared ‘biologically dead’ in 1957 – is now teeming with life, says the Zoological Society of London (ZSL).

The Thames supports over 115 species of fish, 92 species of bird and has almost 600 hectares of saltmarsh – a crucial wildlife habitat.

Tope, Starry Smoothhound and Spurdog sharks are using the river as a nursery as adults like pupping in shallow bays and estuaries.

The Thames provides an ideal habitat – with young sharks remaining for up to two years.

They share the Thames estuary with seahorses. The odd fishes have small ranges – so hang out there all year round.

Pie and mash and jellied eels once sustained dockers and their families and the iconic snake-like, fish is a common sight in East End waters once more.

There are also wild native oysters in the outer estuary. They provide food and reefs for young fish – and also filter the water.

Alison Debney, of ZSL, said: ‘Estuaries are one of our neglected and threatened ecosystems.

‘They provide us with clean water, protection from flooding and are an important nursery for fish and other wildlife.

‘The Thames estuary and it’s associated ‘blue carbon’ habitats are critically important in our fight to mitigate climate change and build a strong and resilient future for nature and people.

‘This report has enabled us to really look at how far the Thames has come on its journey to recovery since it was declared biologically dead, and in some cases, set baselines to build from in the future.’

The Tope shark has a streamlined body with a distinctive, long snout – and can reach six feet in length.

It is known for being aggressive and powerful – and is an extremely strong swimmer.

The Starry Smoothhound feeds mainly on crustaceans – but does not have razor-sharp teeth. Instead, it has powerful crushing plates.

The Spurdog covers large distances when looking for food by swimming in shoals.

It has two dorsal fins that release venom – which can cause extreme discomfort and swelling in humans.

The first State of the Thames Report shows how the river is helping protect vulnerable animals.

It also identifies the threats it faces from climate change and pollution.

Since the early 1990s, the number of fish species in tidal areas have shown a slight decline – with the cause needing to be established.

But the temperature of the capital’s waterway has risen by 0.2*C per year on average – which combined with sea-level rises is worrying.

Water levels have been increasing since monitoring began in 1911 in the Tidal Thames.

Water temperature also showed a significant increase during summer and winter in both long and short-term data sets.

The estuary’s wildlife will be particularly impacted through changes to species’ lifecycles and ranges.

Water quality has improved with dissolved oxygen (DO) concentrations showing a positive, long-term increase from 2007 to 2020.

Less than 45 percent DO can kill fish and impact relationships between key species that live in the river.

Overall, phosphorus concentrations have decreased since the 1990s thanks to improvements at sewage treatment works.

But there has been a long-term increase in nitrate concentrations which can negatively affect water quality and be damaging to wildlife.

The Environment Agency has identified industrial and sewage waste as the main source of nitrate in London’s waters.

In addition, there are many chemicals of concern that are not being regularly monitored, with potentially harmful impacts on wildlife.

Liz Wood-Griffiths, head of consents at Tideway, said: ‘This report comes at a critical time and highlights the urgent need for the Thames Tideway Tunnel, known as London’s new super sewer.

‘The new sewer, which is due to be complete in 2025, is designed to capture more than 95 per cent of the sewage spills that enter the River from London’s Victorian sewer system.

‘It will have a significant impact on the water quality, making it a much healthier environment for wildlife to survive and flourish.’

The plan for the Thames

ZSL is calling for nature-based solutions to be at the heart.

James Brand, Thames Estuary 2100 Advisor at the Environment Agency said: ‘We are pleased to support the State of the Thames Report published today.

‘If we are going to tackle the climate emergency, nature needs to be at the heart of our solution, both in slowing the pace of future change and adapting to the changes that we are already seeing.

‘The Environment Agency is committed to reaching net zero by 2030 and improving water quality in our rivers.

‘The Thames Estuary 2100 Plan advocates adapting to rising sea levels by thinking holistically about our riversides, incorporating new wildlife habitat, and other environmental improvements as we work in partnership to upgrade flood defences.’

The report provides vital evidence about the ways the 215-mile Thames is used and its importance for local people.

It also features the first ever indicator for plastic pollution – creating a baseline for scientists to work from and monitor as the years go on.

The river provides drinking water, food, livelihoods and protection from coastal flooding for nine million people that live near it.

They support birds, fish and seals and are critical ‘blue carbon’ stores – making them even more essential.

Ms Debney said: ‘While there have been heavy, historic losses of the natural habitat to urban development, ZSL is working closely with partners to create new estuarine habitat including native oysters, seagrass and saltmarsh habitat.

‘Between them, these not only help to restore wildlife in the river, but also act as natural flood defences, and help to mitigate against extreme weather such as storms and floods.

‘A resilient future for both people and wildlife will depend on protecting remaining natural habitats, reconnecting and restoring habitats, and innovating new ways to maximise opportunities for wildlife in the urban environment.’

ZSL is calling on world leaders to unify solutions to tackle biodiversity loss and climate change and put nature at the heart of decision making.