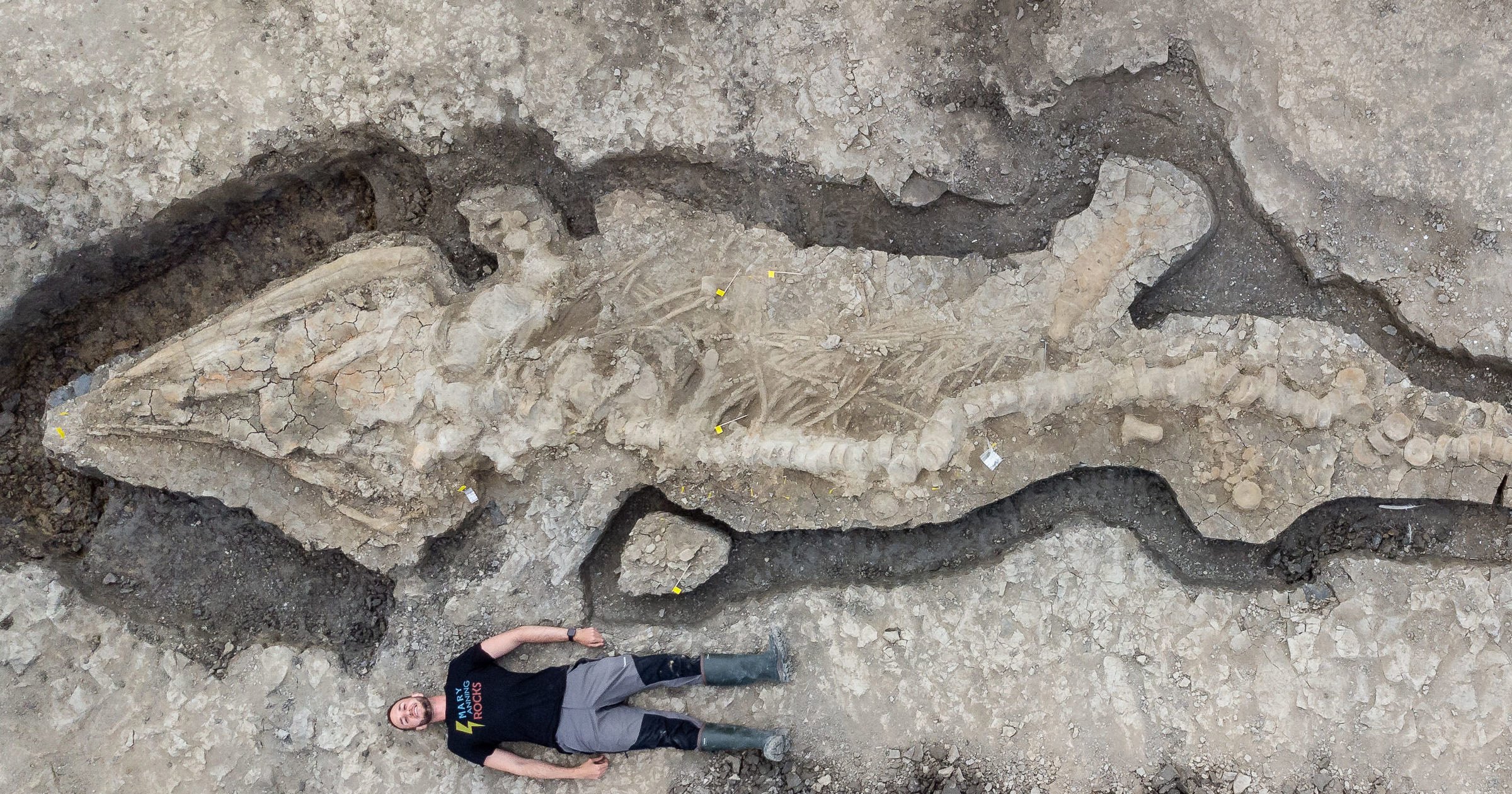 Scientists have hailed one of the ‘greatest finds’ in British palaeontological history after the largest fossilised remains of a prehistoric ‘sea dragon’ were discovered in the Midlands.

The ichthyosaur, approximately 180 million years old with a skeleton measuring around 10 metres in length and a skull weighing approximately one tonne, is the largest and most complete fossil of its kind ever found in the UK.

It was discovered by Joe Davis of Leicestershire and Rutland Wildlife Trust during a routine draining of a lagoon island at Rutland Water in February 2021.

The first ichthyosaurs, which are called sea dragons because they tend to have very large teeth and eyes, were discovered by fossil hunter and palaeontologist Mary Anning in the early 19th century.

Dr Dean Lomax, a palaeontologist who has studied the species, said: “Despite the many ichthyosaur fossils found in Britain, it is remarkable to think that the Rutland ichthyosaur is the largest skeleton ever found in the UK.

“It is a truly unprecedented discovery and one of the greatest finds in British palaeontological history.”

Ichthyosaurs, which were marine reptiles, first appeared around 250 million years ago and went extinct 90 million years ago, varying in size from one to more than 25 metres in length and resembling dolphins in general body shape.

The remains were dug out by a team of expert palaeontologists from around the UK in August and September.

Two incomplete and much smaller ichthyosaurs were found during the initial construction of Rutland Water in the 1970s. However, the latest discovery is the first complete skeleton.

Dr Mark Evans of the British Antarctic Survey said: “I’ve been studying the Jurassic fossil reptiles of Rutland and Leicestershire for over 20 years.

“When I first saw the initial exposure of the specimen with Joe Davis I could tell that it was the largest ichthyosaur known from either county.

“However, it was only after our exploratory dig that we realised that it was practically complete to the tip of the tail.”

He added: “It’s a highly significant discovery both nationally and internationally but also of huge importance to the people of Rutland and the surrounding area.”

Nigel Larkin, a specialist palaeontological conservator, said: “It’s not often you are responsible for safely lifting a very important but very fragile fossil weighing that much.

“It is a responsibility, but I love a challenge. It was a very complex operation to uncover, record, and collect this important specimen safely.”

The excavation of the remains will feature on BBC Two’s Digging For Britain on Tuesday at 8pm.

The ‘mutant’ cockroach offspring also passed the artificial mutations onto the next generation on mating (Picture: Unsplash)For the first time, scientists have edited the...
Read more

Power adapters have been getting smaller over the years thanks to gallium nitride (GaN) semiconductor technology, but Ugreen’s $179.99 Nexode 200W charger is using...
Read more

Shadow is adding a new subscription tier to its cloud gaming service with access to the equivalent of Nvidia and AMD’s latest generation of...
Read more

The Twitter deal hangs as Musk presses for proof of bot count on the platform, Twitter’s legal team accuses Musk of breaking an NDA,...
Read more

Almost five months after Google announced that it was going to make G-Suite legacy free edition users start paying for their accounts, it seems...
Read more