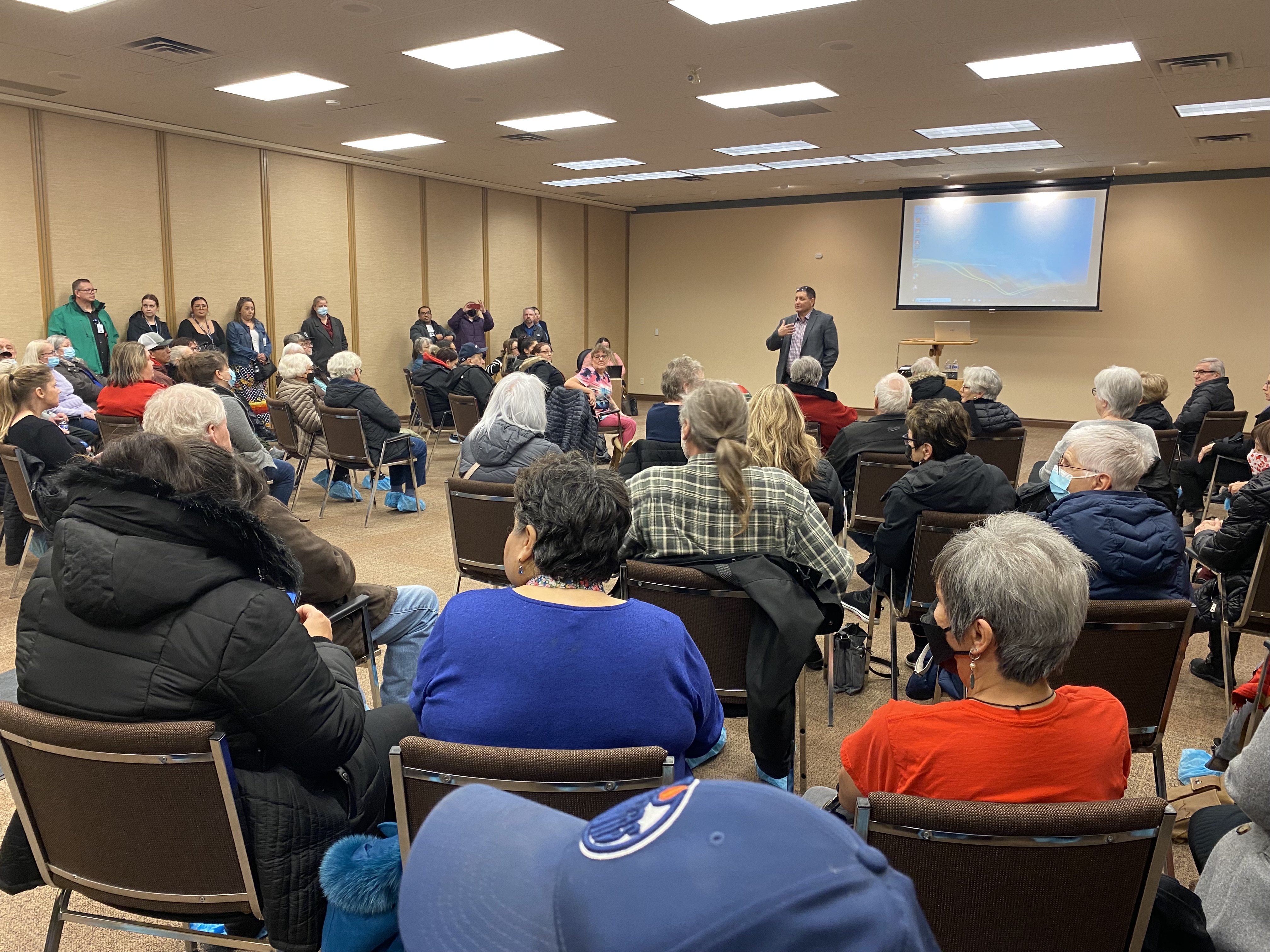 The transition to the new Saskatoon Emergency Wellness Centre is almost complete, and spaces are filling up fast.

The new location is a replacement for the old location on First Avenue.

Saskatoon Tribal Council Tribal Chief Mark Arcand said that 97 individuals, including 12 children, have been moved into the facility since the transition began this week.

Arcand expects all remaining spaces to be filled by Friday night, which shows the high demand for safe spaces in the city, especially in the colder months.

He said that several clothing donations were made on Friday to support the opening of the new facility.

“McKercher actually did their Gift of Warmth,” said Chief Arcand, “they donated 300 (pairs of) socks as we have been selected by them to be their charity of choice this year.

“The relatives out there actually don’t have proper footwear and that kind of stuff, so socks are a big need for us.”

“It’s a small gesture, but even the smallest gesture can seem to make the world of difference to somebody, so we just want to give back to the community and support people in time of need,” said a representative from McKercher.

The First Nations Capital Infrastructure Association of Saskatchewan brought approximately $2,500 worth of jackets, mittens and socks for those utilizing the emergency shelter.

The building in the Fairhaven neighbourhood can house 106 people. It is a four and a half acre property, quite unlike the location downtown.

“We can’t force people to come, but right now, we are at 97 people out of 106 so those are pretty good numbers within two days,” Chief Arcand said.

“We are going to utilize (this place) to our fullest extension to make sure they are safe and warm.”

The facility includes separate units for families, men and women.

With some of these units already at max capacity, the overflow space is already being utilized.

In response to concerns from the public about how the wellness centre will impact community safety, Arcand said they are doing everything they can to ensure safety and structure in the new facility.

“If people are concerned about what is happening at a local store, call the police,” said Arcand. “We support that. If we have to call the police here, we will. It’s about the safety of the community.”

Chief Arcand describes the new facility as having a much calmer atmosphere in comparison to the downtown centre.

A current user of the centre, who preferred to remain anonymous, said he feels comforted by the number of helping hands at the new facility.

“I truly understand and believe that there is a second chance for everyone,” he said. “I believe the STC Wellness Centre is definitely a place that gives you a second chance in life, which I am very grateful for.

“They have shown me very positive things about myself and about people around me, which goes hand in hand with respect for what they do, for me and the people around.”

Future plans for the centre include the installation of a commercial kitchen, more showers and laundry facilities, as well as more program space.

The old downtown facility was being used as a warming facility, however, Arcand said all funding must be put into the new space for it to be operable. He expects the old facility to be shut down Sunday, Dec. 4.

“I think the whole system that has been designed for these warm-up shelters is wrong,” Arcand said. “If we are taking X amount of dollars and splitting it up to make organizations happy, we are not fulfilling a need.”

With the warming centre downtown closing, the demand at the new wellness centre is expected to be more intense.

The great Chinese spy balloon drama of 2023 is not over yet. As it turns out, there’s another not-a-spy balloon floating over Latin America...
Read more