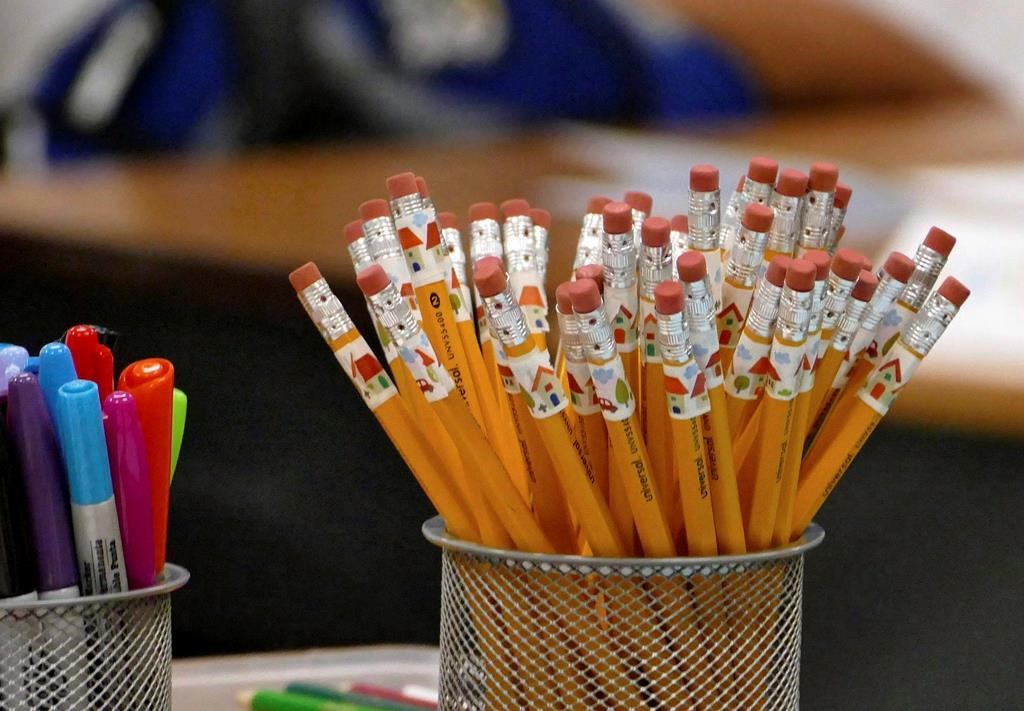 $20 million was announced from Saskatchewan’s Ministry of Education back in July to offset inflationary costs school divisions are seeing across the province, but a Saskatoon Catholic board of education says it wasn’t enough.

Out of that funding, the Greater Saskatoon Catholic Schools (GSCS) division received $1.3 million, but said it’s a far cry from what they need to avoid decisions like the imposition of a lunchtime fee.

The GSCS board of education held its Monday meeting, and on the agenda was the motion to approve an amended budget with the additional $1.3 million.

According to the document, the funding the board received only partially covered the $3 million it said was initially required to run the same services seen in the 2021-22 school year.

“The budget needed to be passed, and the government asked us to look in two areas — in transportation — and in insurance, and we had the administration at council look at that and put them in those two specific areas, and that’s where our share of that $20 million went,” said Diane Boyko, board chair for GSCS.

Boyko said that covered a portion of the $3 million deficit, but added that since June there have been increases in costs.

“So the $1.3 million covered some of that, but of course we still are looking for dollars.”

She said they’ve been trying their best to stop cuts to the classroom, but that some situations are impossible.

“As our board has always said to administration, we try and stay away from the classroom, but we’ve also had to ensure that, because things are so tight, we’re doing the best that we can to ensure that it is staying away from there. But it’s come to that point where things become impossible,” said Boyko.

GSCS has 50 schools within its school division, and has almost 20,000 students.

The additional funding listed in the report said $604,848 would cover the hiring 4.5 more teachers, three more educational assistants, and to cover other inflationary employment costs.

$185,640 would cover inflationary increases to utilities and insurance, with the report saying insurance premiums were increasing, as well as the replacement costs for schools.

The amended budget also allocated an additional $513,039 to cover the increase in gas prices, with the budget projections being raised to an average price of $1.75 per litre for the entire school year.

The board announced in June that it would be eliminating 19 teaching positions, but was also anticipating 400 more students for next year.

Boyko said that number has has risen, and they’re looking at around 735 additional students.

An annual fee was also announced, noting that $70 was needed for lunch-hour supervision for students who remain at school for lunch.

Half-time kindergarten students were charged $35 annually, and fees were capped at $140 per family.

President of the Saskatchewan School Board Association Shawn Davidson said the $20 million handed out by the province was definitely helpful, but didn’t fix all the problems.

“Did it go far enough as to allow school divisions to reverse all of the difficult decisions that they had to make back in May and June when they passed their original budget? No it didn’t,” said Davidson.

He said that this was a very difficult budget year, and every board of education in the province has had to make some changes.

Premier Scott Moe was critical of the news when a lunch-hour fee was announced, saying back on June 10 that school divisions should be pulling from their ‘ample reserves’.

“The education minister has mentioned that there are ample reserves in many, if not all, of the school divisions across the province,” said Moe.

“Before a school division is going to charge parents additional dollars for noon-hour recess … they most certainly should be looking at using some of the reserves that have been growing in the last few years.”

Global News reached out to the Ministry of Education, and received the following statement:

“The Government of Saskatchewan is providing Saskatchewan’s 27 school divisions with a one-time investment of $20 million in funding for the 2022-23 school year to assist with rising fuel and insurance costs. As a result of these additional funds, school divisions will be able to prevent inflationary costs from diverting resources away from classrooms,” read the statement.

“In addition to the $20 million funding announcement, Saskatchewan’s 27 school divisions will receive $1.99 billion in school operating funding for the 2022-23 school year, an increase of $29.4 million or 1.5 per cent over the 2021-22 school year. This will provide $6 million for additional classroom supports and fully fund the 2 per cent teacher salary increase. In addition to this increase, there is $7 million to allow school divisions to hire up to 200 new educational assistants for the 2022-23 school year.

“While government provides funding to school divisions for the provision of programs, supports and services, school divisions have the responsibility to make decisions within their allocated budget to meet local priorities and address the needs of their students and teachers.”

— with files from Andrew Benson

1:55
Saskatoon Board of Education budget cuts

One of the organizers behind the class action lawsuit filed against the federal government by Black public servants says he wants Canadians learning about...
Read more

It’s an all-in-one off-road supercar (Picture: Ferrari)For these past 75 years, Ferraris have always had two doors – or no doors in the case...
Read more

/ For those of you who believed the 4E71 firmware update from last May reduced the ANC strength, I am here to back...
Read more

The Moondrop Aria is probably the most popular pair of IEMs on sale today. Known for its exceptional tuning and affordable price, this pair...
Read more