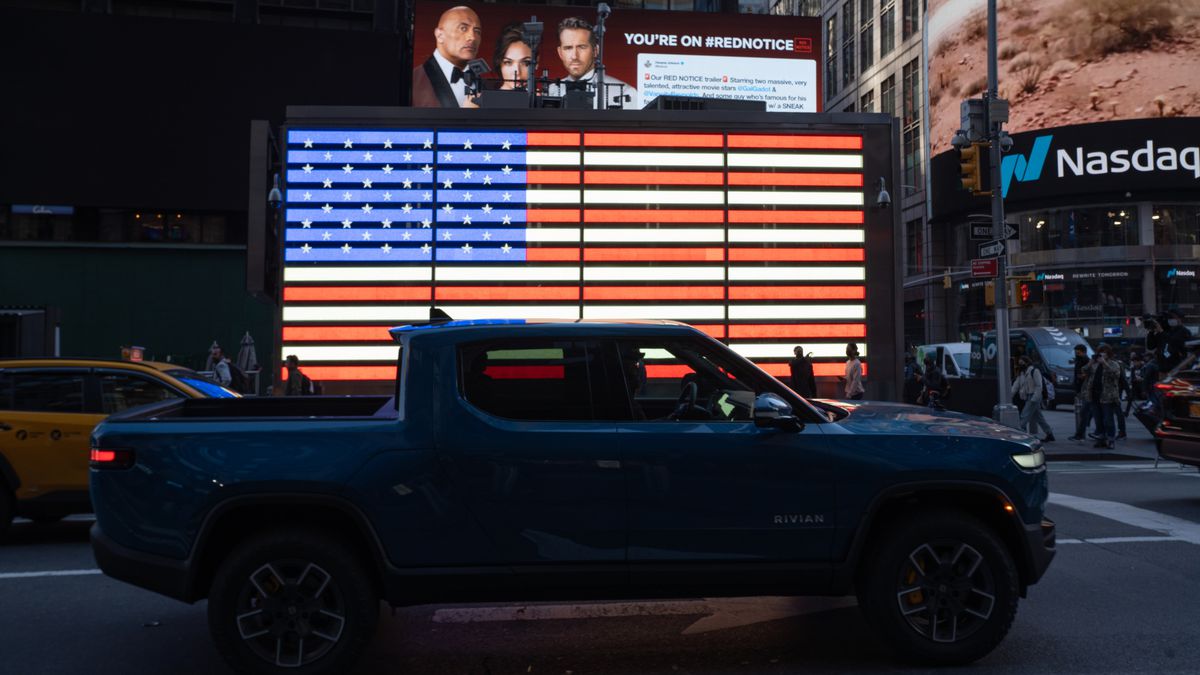 Rivian’s hotly anticipated public debut is finally here, but the electric vehicle company is not generating the same kind of feverish online posting as its rival Tesla or other EV startups — and that’s probably a good thing.

Don’t get me wrong. The company’s IPO, which will net $12 billion on an $80 billion valuation, is proving to be an immensely attractive stock and is already drawing comparisons to other historic public offerings like Facebook. But for anyone who gets their investment news from Reddit forums like r/WallStreetBets, the Rivian IPO was more likely to draw an eye-roll, an off-color remark, or a crude emoji.

“Lmaoooo 80B do they think we’re fucking stupid?” one user wrote last month in response to the news about Rivian’s upcoming IPO. “Bro they must think since stonks only go up, this shit will surpass it with no prob. What a crazy year.”

Tesla’s status as a meme stock has helped propel the Bay Area-based (and soon to be Austin, Texas-based) company’s share price into the stratosphere and make its CEO Elon Musk one of the richest people in the world. The share price has been on an upward trajectory since early 2020 and has shown little signs of flagging. Even mundane headlines like Tesla’s not-a-deal with rental car agency Hertz was enough to push Musk’s company past the $1 trillion mark.

Which is not to say being a meme stock is a safe space to occupy. An errant tweet from Musk last year about the stock being overvalued sent the share price tumbling and wiped out $14 billion of Tesla’s market value. The Federal Reserve thinks meme stocks threaten the stability of the financial system, to which retail investors say that’s kind of the point. Meanwhile, Tesla has regained the value it lost after Musk’s tweet, and then some. (Musk is in the midst of selling off 10 percent of his shares in Tesla.)

On November 10th, the day of Rivian’s big public debut, Tesla’s stock was still the most popular ticker on Reddit, according to Ape Wisdom, which tracks the popular stocks on the message board. Rivian is listed as the seventh most popular stock, beating other meme stocks like GameStop and AMC but trailing regular ones like DoorDash and Palantir. The next day, Rivian had dropped to ninth place.

“Being a meme stock, to some extent, is conjuring the dark arts of the world,” said Reilly Brennan, general partner at venture capital firm Trucks. “It’s really hard to do it consistently over a long period of time.”

Rivian’s future is unwritten, but the company doesn’t seem to have the necessary ingredients to make a meme stock. Its founder and CEO, RJ Scaringe, is not especially active on Twitter, does not court controversy for the sake of controversy, and doesn’t appear to aspire to anything other than leading a company that makes really great electric trucks, SUVs, and vans. If he has an edgy sense of humor, we’ve yet to see evidence of it.

Rivian has far fewer online fans than Tesla by virtue of the fact that its vehicles have yet to reach customers. (The company’s electric truck, the R1T, is expected to begin deliveries before the end of the year.) But the company appears to be cultivating a customer base of wealthy outdoors types — not necessarily the type of person who would project their own identity onto an EV company and then respond to any criticism of said company by losing their shit online.

If meme stocks, in essence, represent a middle finger to institutional investors and short-sellers, then Rivian was already going to have a tough row to hoe. The company has yet to find itself in the crosshairs of any major short-seller. And Rivian has a host of brand-name backers, such as Amazon (which owns 20 percent of the company) and Ford (which helped manufacture all of the company’s preproduction vehicles). Investing in Rivian would hardly demonstrate any rebellion against the system.

Rivian’s slow and deliberate approach stands in contrast to other companies that briefly achieved meme stock status, only to watch it slip away. Hydrogen trucking startup Nikola was able to run up a $30 billion valuation on little more than a few buzzy videos and a CEO doing his best Musk impression. But after going public, and just as the startup was about to secure an investment from General Motors, Nikola’s then CEO Trevor Milton was accused of lying to investors. Milton eventually stepped down and, this year, was arrested and indicted on multiple counts of fraud.

Rivian’s lack of meme-worthy moments makes it an interesting test case for the public market’s appetite for what Brennan calls a “pure play” EV company — an automaker that is only making electric vehicles. Major car companies like Ford and GM are often left talking out of both sides of their mouth, touting huge investments in EV production and battery manufacturing, while also continuing to sell gas-guzzling trucks and SUVs that pollute the environment. Other pure EV companies, like Lucid Motors, went public by merging with a blank-check company, or SPAC, and all the risks that entails. Rivian doesn’t have that same kind of baggage.

“The company has very little in the way of meme currency,” Brennan, who is not an investor in the company, said. “They haven’t done a lot of the things that the rest of the market has done, whether you’re talking about the brand new EV SPAC [special acquisition] companies or Tesla. So I just think inherently there’s a quiet storm aspect of Rivian’s growth over the next few years, which is utterly fascinating.”

Dungeons & Dragons Has Burned Up All the Goodwill

As fans of tabletop roleplaying games debate over what to do about Wizards of the Coast’s new draft of the Open Gaming License for...
Read more