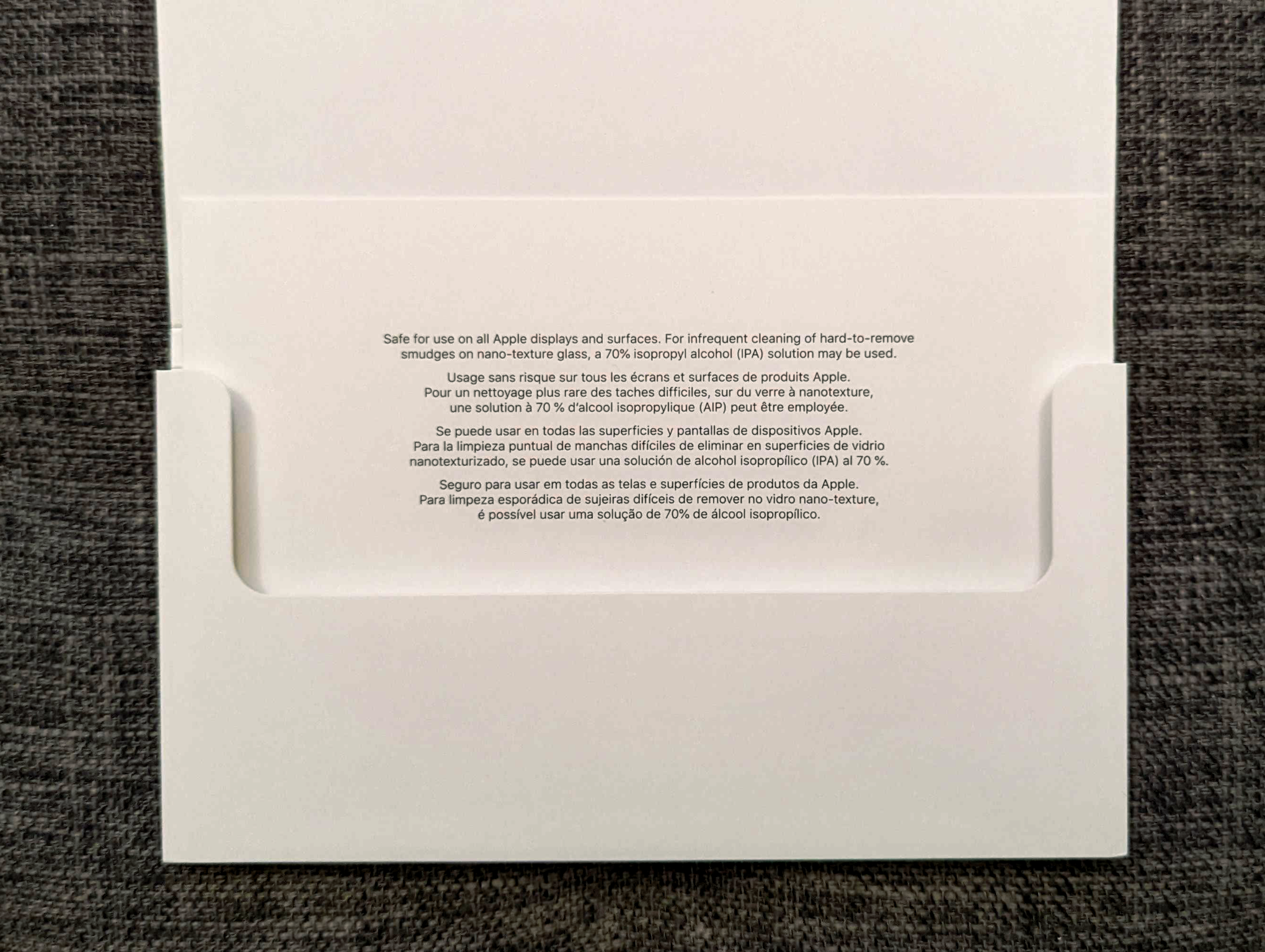 When the “Unleashed” Apple event wrapped up a few weeks ago, the first thing I did was run over to the Apple store to see if any new unannounced accessories had been added. Sure enough, a handful of new ones were. But only one of them stood out: the polishing cloth. It’s taken the world by storm, so much so in fact that it’s backordered up to nearly 12 weeks. Luckily, I was able to get my hands on one and I’ve been using it rigorously over the past week.

Let’s start with the unboxing experience. The Apple polishing cloth comes in a slim white box, just as you might expect. But unlike other Apple accessories, this box is a bit different. It opens like an envelope, revealing the polishing cloth nicely folded up behind a lip. It’s a wide box for what this product is, but when you open it, it’s instantly clear why. Apple doesn’t want any creases or fold marks on the cloth out of the box, and so they’ve carefully folded it in a teardrop shape to prevent any markings.

Between either side of the cloth is a small piece of paper that explains how to use it. Apple’s card inside says that it’s “Safe for use on all Apple displays and surfaces. For infrequent cleaning of hard-to-remove smudges on nano-texture glass, a 70% isopropyl alcohol (IPA) solution may be used.”

The listing on Apple.com even lays out every single product that they believe it is compatible with. Surprisingly, there are several omissions though. For example, Apple says the polishing cloth is only compatible starting with the first-generation iPhone SE, the first-generation iPad mini, and the fifth-generation iPod touch. Even the oldest Mac that they say is compatible is only from 2015. One wonders if the materials selected for the cloth would be too abrasive or harmful in some way to Apple’s older glass formulations. The polishing cloth is luckily compatible with non-Apple devices as well. I’ve been able to clean smudges off my Pixel 6 quickly and efficiently.

Apple’s polishing cloth is made from “soft, nonabrasive material” but the company doesn’t specify what that material is. iFixit’s experts believe that the material is the same microfiber that lines the iPad Smart Cover. Another reference would be Microsoft’s Alcantara keyboard covers, but slightly softer.

On the front side of the cloth is an embossed Apple logo. It’s subtle but quintessentially Apple. It’s placed in the lower right corner, so it stays out of the way but still reminds you it’s Apple’s premium cloth.

There’s a thin light gray edge that wraps around the perimeter of the cloth, holding two pieces of the nonabrasive material together. The material is just thick enough to feel high end, but still thin enough to feel like an Apple product.

I’d recommend being careful with the Apple polishing cloth. The light gray color could easily get quite dirty if used to clean up liquids or other types of marks that may have been left by food. If you do this and want a new one, good luck finding one until 2022.

It’s unclear currently if there are safe ways to clean the polishing cloth. It’s certainly possible that it can be hand washed or thrown in a washing machine. But since we aren’t quite sure what it’s made of, I would avoid trying anything too crazy.

How does it compare

Apple’s cloth is nicer than any other one that I’ve used. In fact, it’s even nicer than any of the cloths Apple has shipped with some devices in the past, like the one that came with the original iPhone. But the company does ship a cloth currently with the Pro Display XDR and 27-inch nano-texture iMac, intended for specific use cases. It appears that the new cloth is nearly identical to the one packed with these machines, but we aren’t 100% certain.

Apple recommends a handful of accessories to pair with the polishing cloth. The first one is the Mac Pro Wheels Kit. Apple’s wheels are quite shiny and made from stainless steel, so a polishing cloth is something you should have around if you want to keep them squeaky clean. Other accessories that Apple recommends you pair with the cloth include the Mac Pro Feet Kit, the Pro Stand, and AirPods Pro.

We certainly hope that Apple will continue to innovate in this category. It would be great to see them ship polishing cloth in other colors, like space gray or pink sand. Like AirTag they could even ship a pack of them. We’ll just have to wait and see what 2022 has in store for Apple polishing cloth.

Apple’s polishing cloth is priced at $19.00 and is sold both in Apple retail stores and on Apple.com.