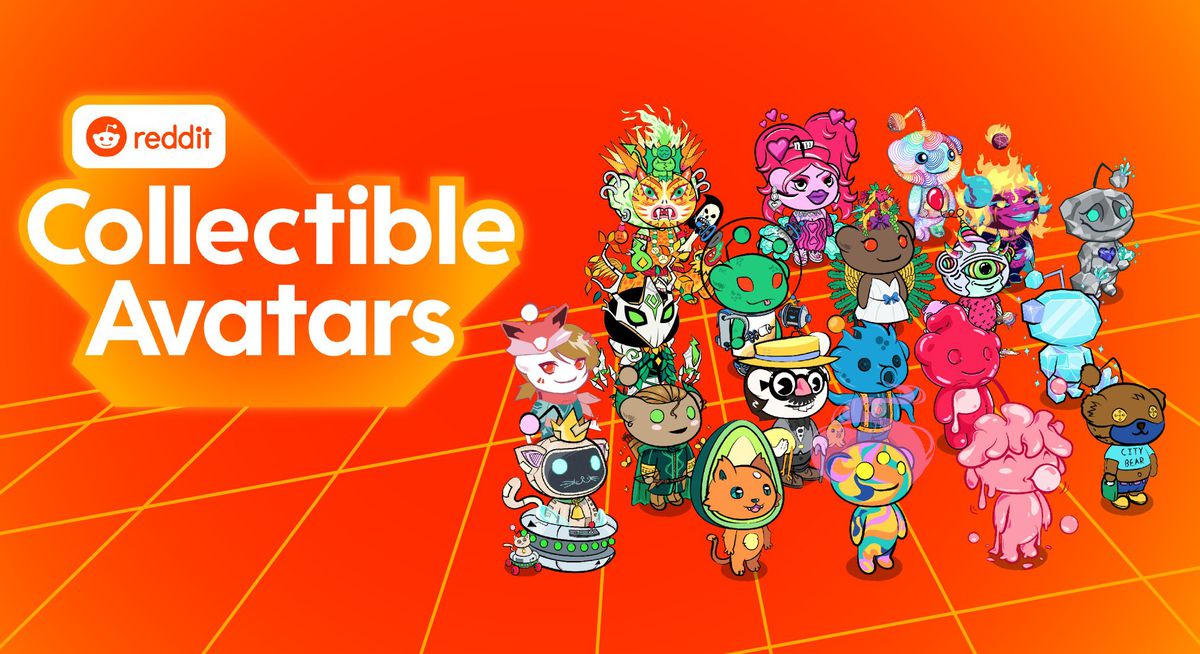 Crypto critics have had a very good year. Much of what they predicted has come to pass: that high-profile projects would be revealed as Ponzi schemes; that security lapses would lead to massive thefts; and that average people would be left holding the bag. Bitcoin, which was trading around $67,000 in November, is at $21,570 today; plenty of other cryptocurrencies are much worse off.

As I noted here last month, though, on social networks it can feel like the crypto crash really never happened. Over the past few months, Facebook and Instagram added ways for users to showcase non-fungible tokens, and Spotify let artists use NFTs as their profile pictures.

The origin of that piece was the news that Reddit, the venerable social news aggregator and discussion site, had released its first “blockchain-backed collectible avatars” — what other companies call NFTs. Created by a handful of artists, the avatars riff on Reddit’s “Snoo” alien mascot and can be used as profile pictures on the site.

In the video game industry, selling NFTs has often raised a furor among gamers angry at what they perceive to be pure greed. But while Reddit takes a 5 percent cut of sales from the NFTs, its announcement came and went without much fuss.

This month, the company went a step further: beginning on August 17th, it began to give away collectible avatars for free to 10 million users. About 50,000 have been given away so far to long-time Redditors who have made popular contributions to their communities; the remainder will be given out over the next few weeks. The only catch is that users have to set up a crypto wallet to receive it — the first step, Reddit hopes, in encouraging millions of users to begin exploring the concept of “portable identity.”

Some people hear phrases like that and their eyes roll back so far in their head that they may never recover. But a significant number of executives at tech platforms big and small continue to believe that somewhere in all this lies a solution to many of the criticisms we have of our current lives online: that a small number of companies have too much power; that our data is locked up and inaccessible to us; that platforms ask us to share more of ourselves than we are comfortable with.

Steve Huffman is one of those executives. A co-founder of Reddit and its CEO since 2015, Huffman says he has been fascinated by blockchain technologies since the early days of Bitcoin, when he would marvel at the fact that some people were willing to pay as much as seven cents for one.

Avatars were a natural starting point for Reddit’s blockchain explorations, he said, since people use the feature differently on Reddit than they might on iMessage or Snapchat. There, avatars typically represent users somewhat accurately, as cartoon versions of themselves. Reddit avatars, on the other hand, are aliens, meant to highlight aspects of a user’s personality without giving away their true identity.

Launched about a year and a half ago, roughly one-third of logged-in Reddit users have created avatars so far, he said.

“You can reveal your hobby without revealing your race. You can reveal some of your style without revealing your age or your gender,” Huffman told me at the company’s offices in the Mid-Market neighborhood of San Francisco. “This idea of capturing some of your own identity there, on your own terms, is a very Reddit thing to do. I wish we had done this 10 years ago — because it really fits Reddit.”

Letting artists sell avatars on the platform was linked to a separate goal of helping Redditors earn money from other users, Huffman said. But he also wants to move away from a world where digital goods are controlled by the platform that creates them.

“What crypto adds is the ability to own digital things,” he said. “Before that, you could create digital goods, like in a game. But those goods ultimately exist at the pleasure of the company that creates them, or runs the database. And so it’s not actual ownership — I’d like to get closer to actual ownership.”

Already, he notes, a user can choose to display their digital Reddit avatar as part of a collection on Instagram, or use it as a profile picture on Twitter. The companies didn’t sign a partnership deal to make that happen — it just works because the blockchains run on an open standard.

“We don’t work with any of these companies,” Huffman said. “I can’t say we’re the best of friends. But now we have this third-party database — an interoperability layer. I think that’s really cool.”

Of course, that’s not to say that many people will be racing to bring their Snoos to Twitter. But it does hint at what could be possible in the future, Huffman said. People may start by bringing a profile picture with them around the internet; later, other bits of identity could become portable as well. Reddit users reward each other with “karma” points for sharing high-quality links or making good comments; what if you could log in to other websites with your Reddit karma?

The company took a step in that direction in 2020, when it announced a still-ongoing experiment called “community points.” Based on Reddit’s existing karma model, community points enable subreddits to award users tokens that exist on the Ethereum blockchain. The company has proposed a variety of uses for these tokens, including polls that give more weight toward active participants in the community, prizes for contests, and enabling users with good reputations to access extra features in other apps and websites.

The company’s avatar bet, in a way, is even bigger: an effort to get 10 million people to begin actively using crypto wallets — without ever calling them crypto wallets or (hopefully) using any crypto-related words at all.

“We try really hard not to use any crypto words — it just confuses people,” Huffman said. “The ecosystem is so confusing. I can’t figure out half this stuff.”

Huffman offered a metaphor to make his point.

“One of my frustrations with the crypto community is like, you know how everything in open source is just a little bit worse? But they’re like, ‘it’s amazing! Look at this Microsoft Word replacement, it’s just as good! No it’s not. Crypto’s like that, again.”

Like every crypto builder, Huffman’s challenge is to abstract away all those confusing terms and arcane user experiences, and replace them with something approachable and valuable. Few if any companies have hit that bar to date, despite years of trying and billions of dollars invested.

Reddit also has to conduct its explorations without triggering the sort of backlash that video game companies have experienced when they announce blockchain projects. Huffman told me he is confident that the company can — and said the recent crash makes it easier to focus on building utility.

“I was anti-profiteering, anti-bubble,” he said. “All of this crypto stuff I found extremely distasteful and counter-productive for years, which is why we don’t talk about it. Because I didn’t want to get sucked into the hype, which I think is parasitic and delusional. Our business model is never, let’s sell NFTs to crypto people to make a bunch of money. Our goal is to put identity and reputation into a third-party database.”

The next steps, then, are to get people using wallets, and from there see what other parts of Reddit might be devolved away from the platform to users and their communities.

I enjoyed talking to Huffman, who brings the right kinds of skepticism to a technology that has been poisoned by wide-eyed optimists and outright scammers. At the moment it can feel as if the tech world is investing most of its energy into a set of Legos that no one has figured out how to put together — using building blocks like identity, ownership, and decentralization to make … something, and hope that the end product is worth all the effort.

“The backlash usually comes from profiteering — we’re distinctly and intentionally not doing that,” Huffman told me. “The product may or may not work. But its success won’t come at the expense of our users.”