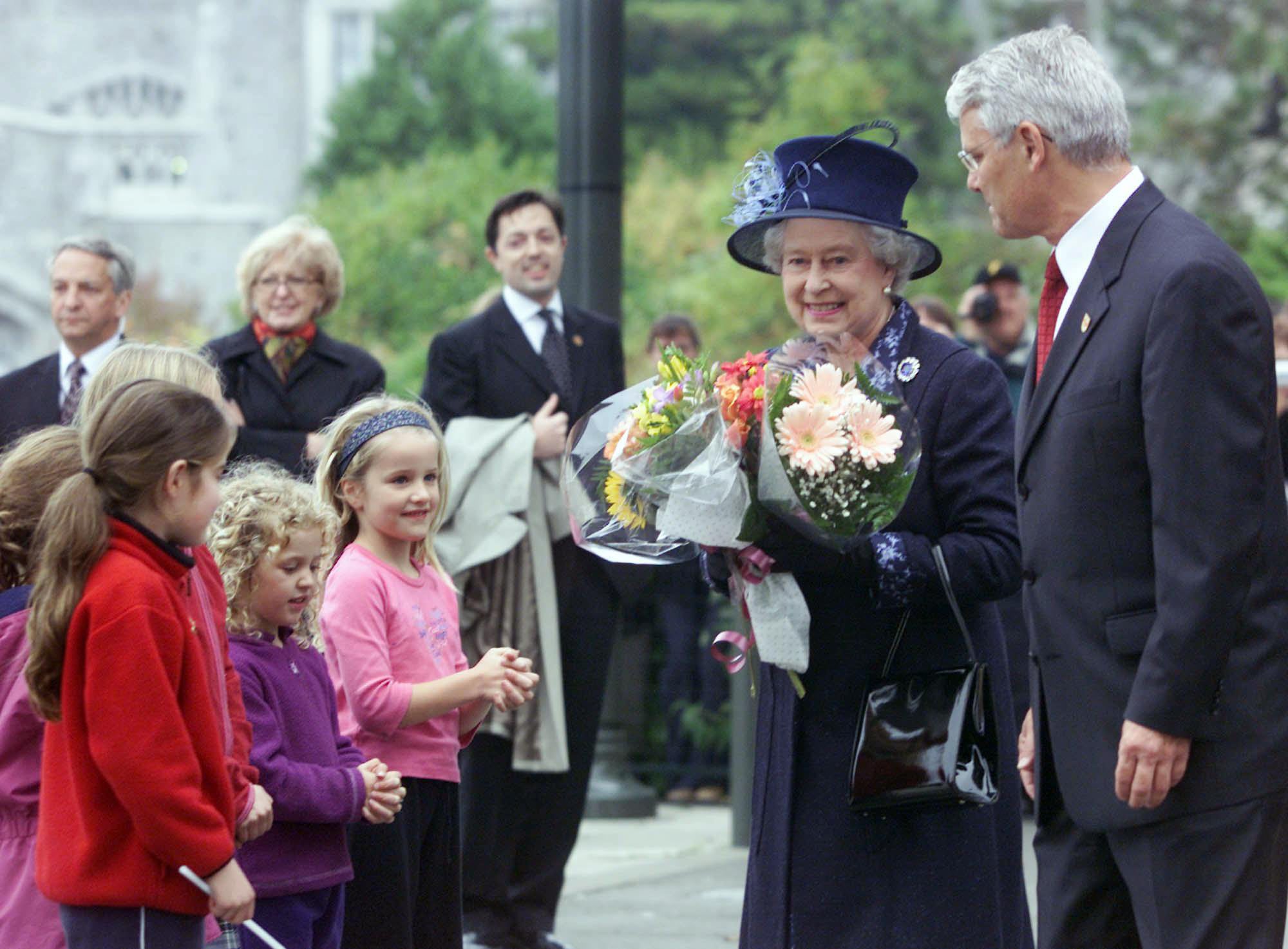 The long good-bye for Queen Elizabeth II is a reminder of a broader truth playing out with little fanfare across Britain: The nation is bidding farewell to the men and women who fought the country’s battles during World War II.

The queen, who served as a mechanic and truck driver in the last months of the war, was a tangible link to the sailors, soldiers, airmen, marines and others who signed up to do their bit in a conflict that killed 384,000 service personnel and 70,000 British civilians.

But like the queen, even the youngest veterans of the war are now nearing their 100th birthdays, and a steady stream of obituaries tells the story of a disappearing generation.

“It’s extraordinary how that sense of the passing of time is felt very keenly at the moment,″ said Charles Byrne, director general of the Royal British Legion, the nation’s largest armed services charity.

“The queen was a personification of that generation … and with her passing, it just drives home the sense that time is moving relentlessly, as it does.” 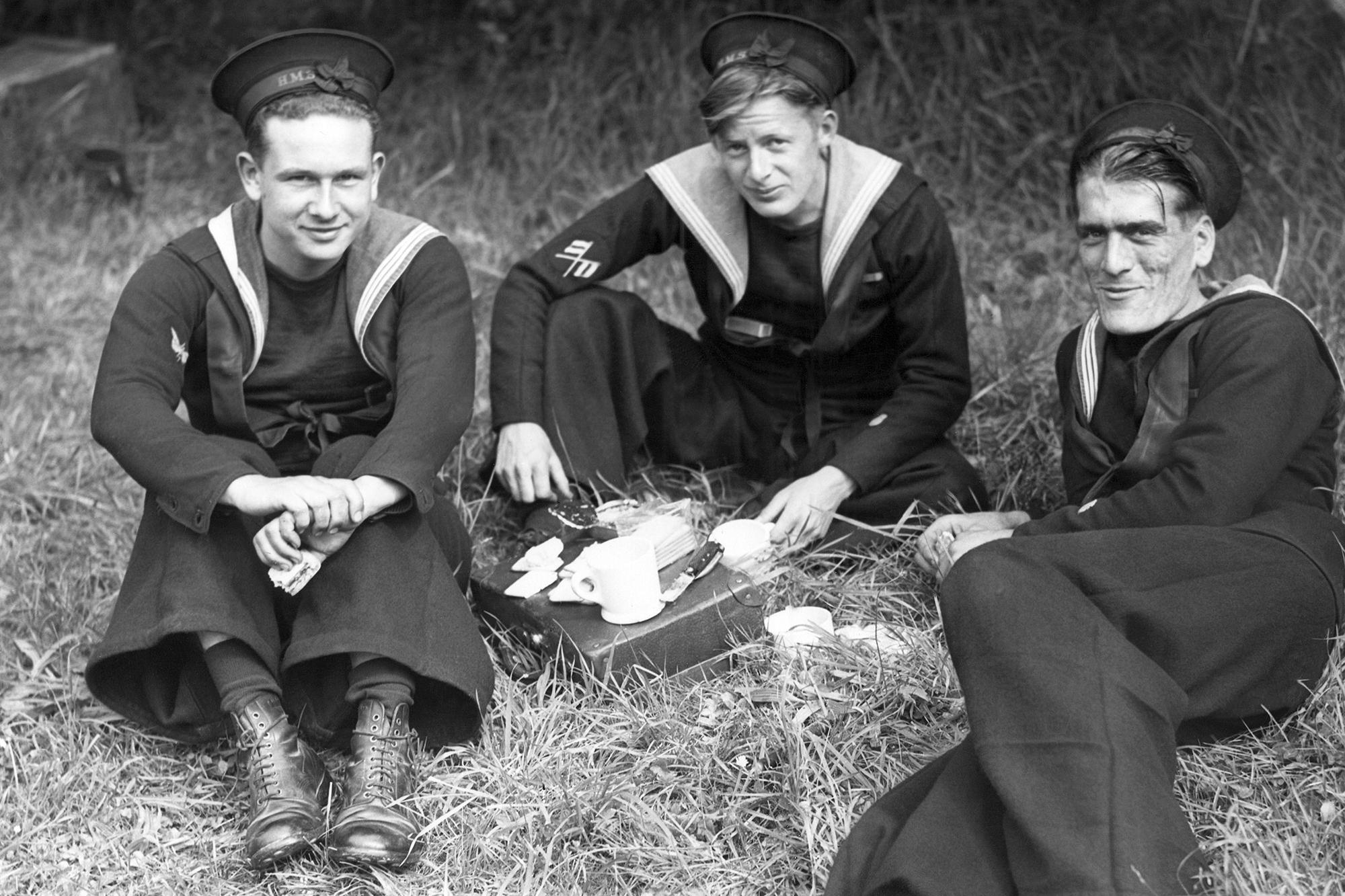 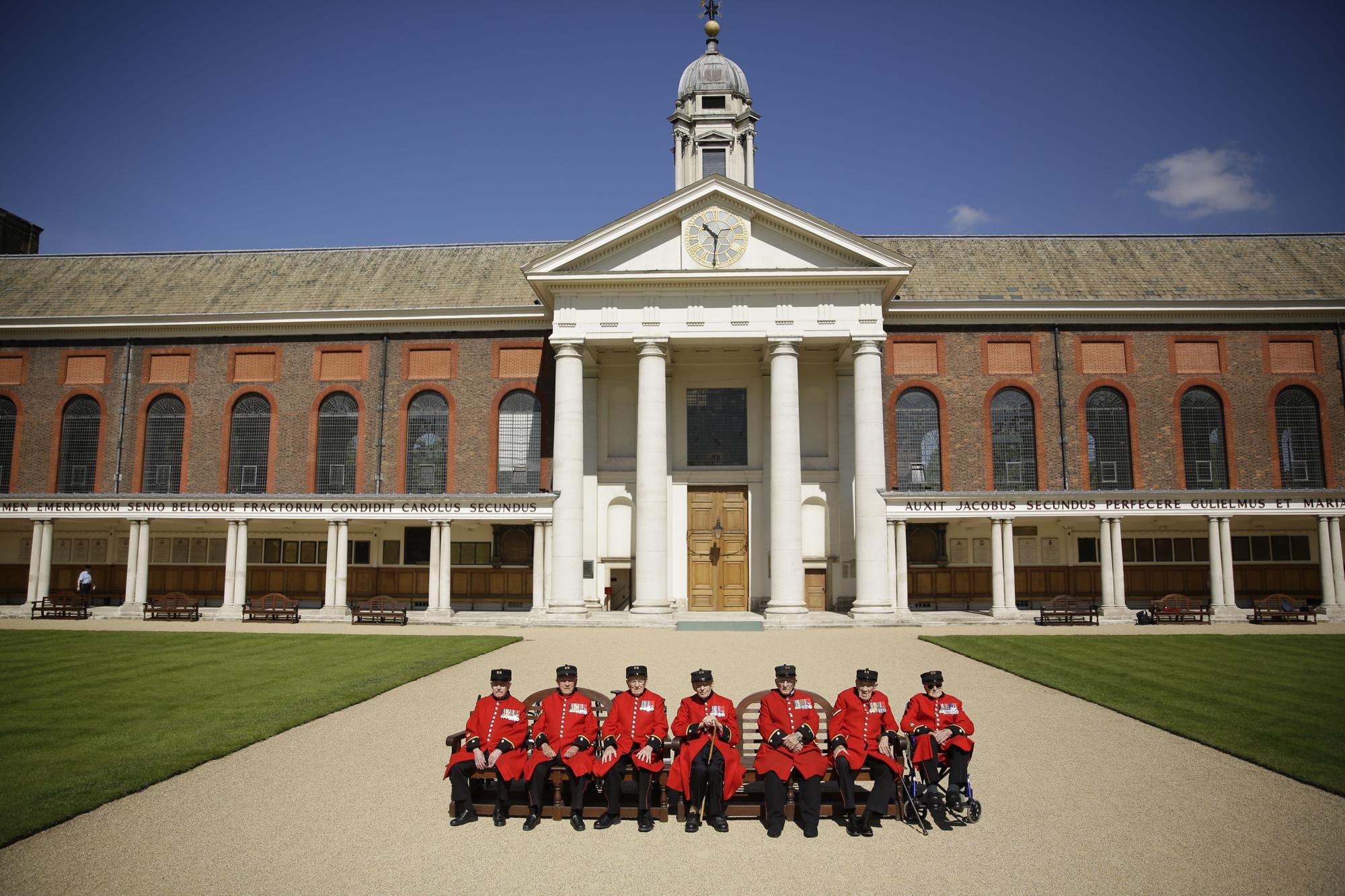 British Chelsea Pensioners who are veterans of the World War II Battle of Normandy, pose at the Royal Hospital Chelsea in London, May 13, 2019. (AP Photo/Matt Dunham)

That loss is, perhaps, felt more widely in the United Kingdom than a country like the United States, because the U.K.’s very existence was threatened during the war. Bombs fell on cities from London to Belfast, women were conscripted into war work and wartime rationing didn’t end until 1954.

Elizabeth, who famously saved ration coupons to make her wedding dress in 1947, led a ceremony of remembrance for all the nation’s fallen service personnel each year on the anniversary of the end of World War I.

“She is the epitome of that sense of service and stoic contribution,″ Byrne said. “And that is treasured more than ever.”

British authorities don’t know exactly how many World War II veterans are left because the nation’s census takers didn’t track military service until last year. Those figures are due to be released next month. 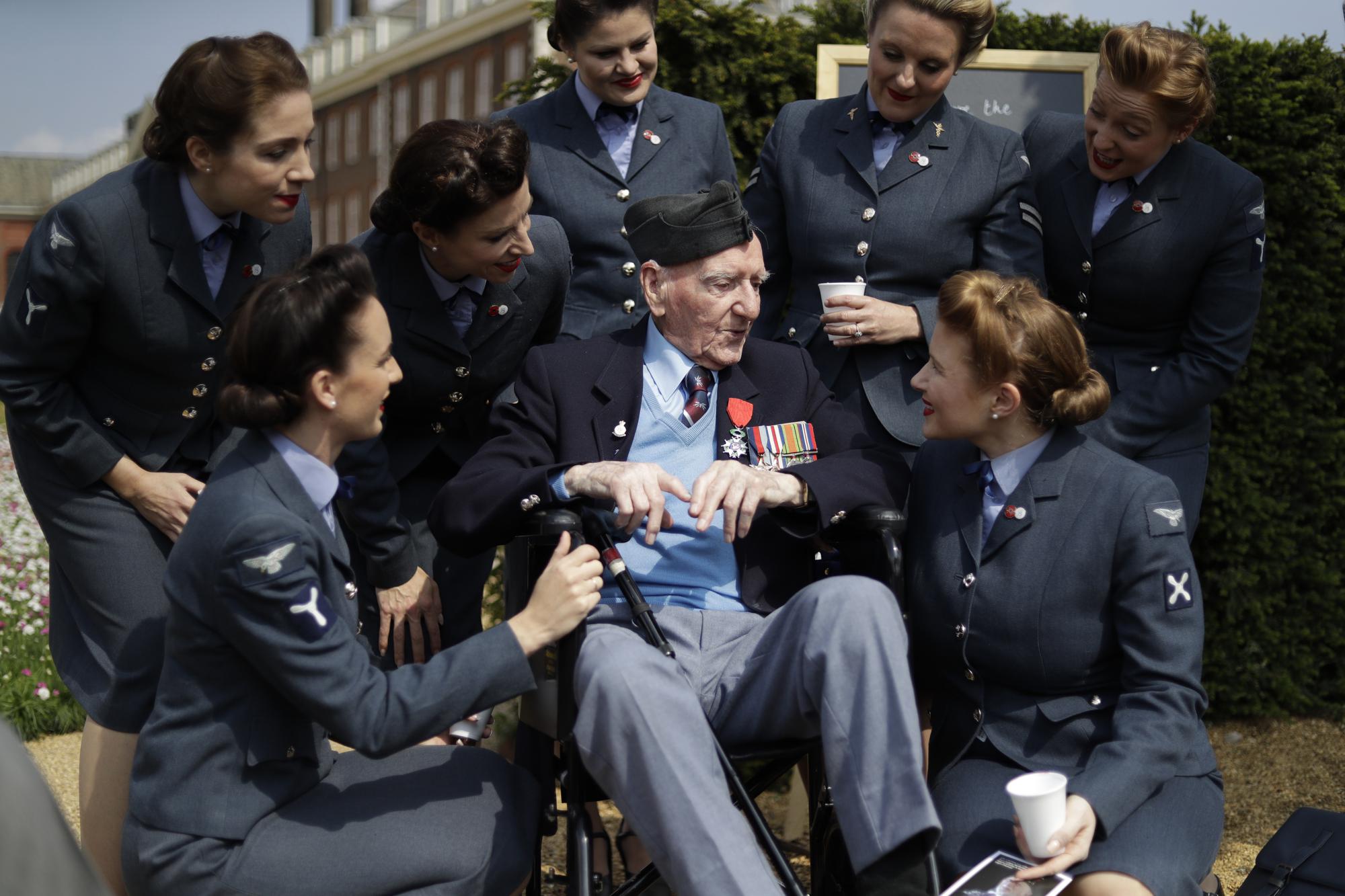 The Royal Air Force says it knows of only one surviving Battle of Britain pilot, the men Winston Churchill immortalized as “the few” who helped turn the tide of the war. Group Captain John Hemingway celebrated his 103rd birthday in July.

But the number of survivors is dwindling.

Among those who died this year were Henriette Hanotte, who ferried downed Allied pilots across the French border as they made their way home. And Harry Billinge, who was just 18 when he joined the first wave of troops to land on Gold Beach in Normandy on D-Day, as well as Douglas Newham, who survived 60 bombing raids as a Royal Air Force navigator, but was haunted by those who didn’t return.

It was a time of shared sacrifice. Then Princess Elizabeth, like many teenagers, had to persuade her father to let her join the army in 1945.

When Elizabeth turned 18, King George VI exempted her from mandatory military service because he said her training as the heir to the throne took precedence over the wartime need for manpower.

But the princess, who began her war work at the age of 14 with a broadcast to displaced children and later tended a vegetable garden as part of the government’s “Dig for Victory” program, got her way. 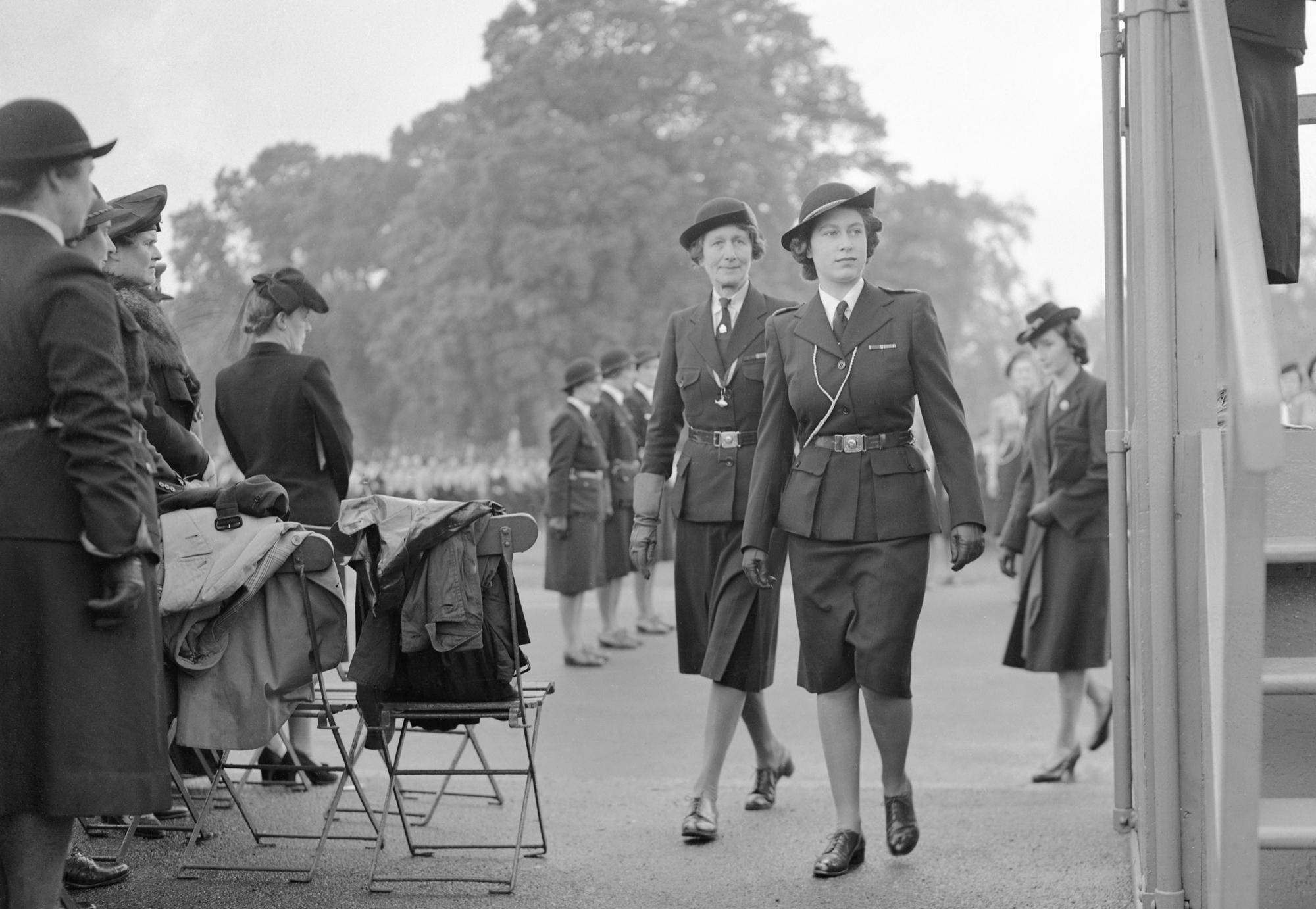 Princess Elizabeth makes her way to saluting base where she will watch the march past of some of the eight thousand Girl Guides on parade in Hyde Park, London, on May 19, 1946. (AP Photo)

She enlisted in the Auxiliary Territorial Service in February 1945 and trained to become a military truck driver and mechanic. The ATS was the largest of the auxiliary services deploying women to non-combat rolls such as clerks, drivers and dispatch riders to free up men for front line duties.

The first female member of the royal family to serve in the armed forces, Elizabeth was promoted to honorary junior commander, the equivalent of an army captain, after completing five months of training. But the war ended before she could be assigned to active duty. 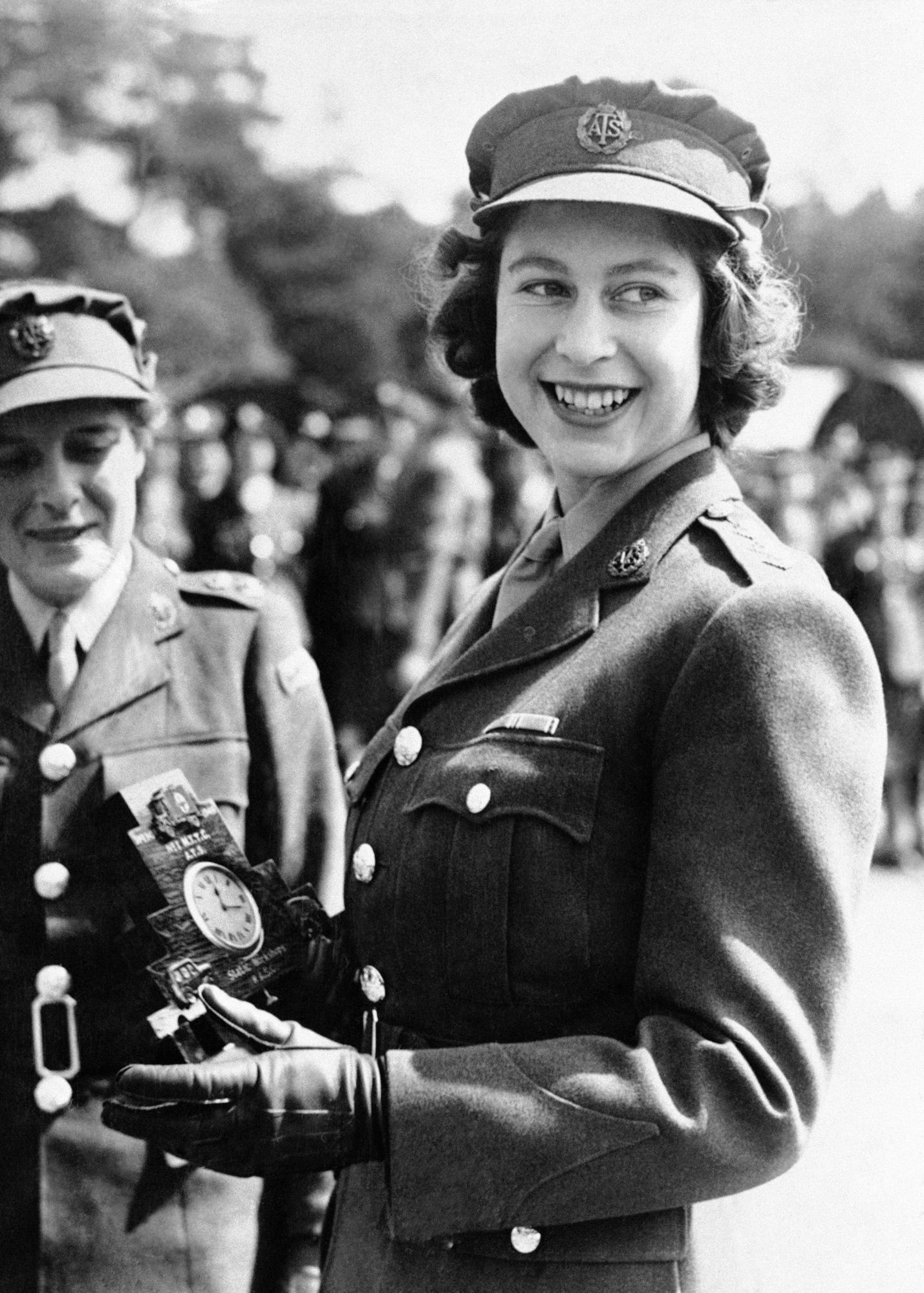 Britain’s Princess Elizabeth, a Junior Commander in the Auxiliary Territorial Service, receives a clock presented to her by her old associates at the camp where she received her early training, during a ceremony at the No. 1 M.T. Training Center, in Camberley, England, Aug. 3, 1945. (AP Photo)

On May 8, 1945, Princess Elizabeth appeared in uniform on the balcony of Buckingham Palace as the royal family greeted the crowds celebrating Germany’s surrender. That night, she and her sister, Princess Margaret, slipped out of the palace to take part in the festivities.

“We cheered the king and queen on the balcony and then walked miles through the streets,” she later recalled. “I remember lines of unknown people linking arms and walking down Whitehall, all of us just swept along on a tide of happiness and relief.” 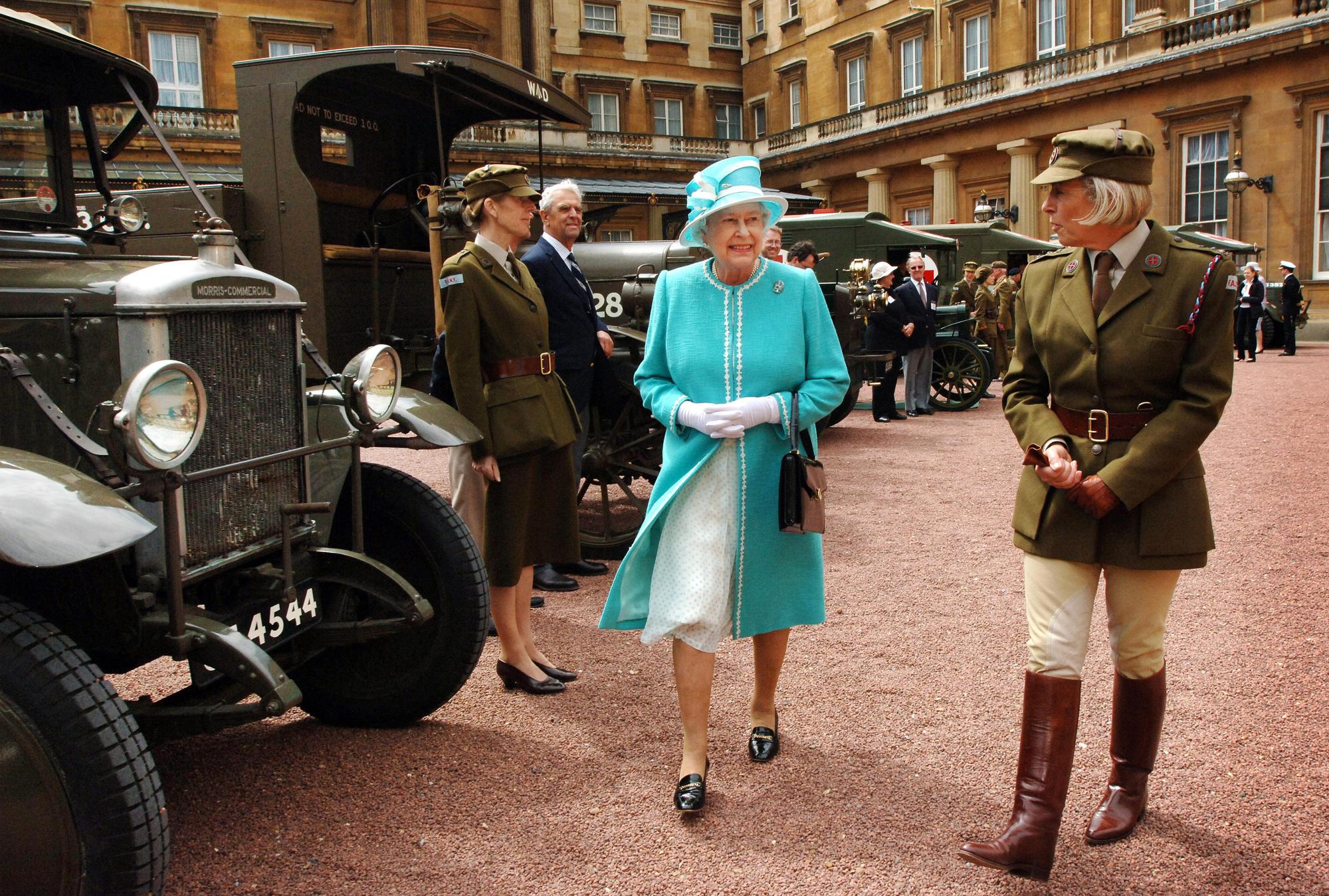 Queen Elizabeth II, accompanied by Commandant Lynda Rose, right, inspects vintage vehicles used by the First Aid Nursing Yeomanry, in which she herself served during WWII. The vehicles assembled in the quadrangle of Buckingham Palace, London on June 28, 2007, to mark the centenary of the corps. (AP Photo/Fiona Hanson/Pool/PA Wire)

Many of those who took part in that joy are now gone.

Among them is Frank Baugh, a Royal Marine who helped guide a landing craft to Sword Beach during the June 6, 1944, D-Day landings. He later campaigned for a memorial to be built to commemorate the 22,442 men and women who died under British command during the Battle of Normandy.

A few months before his death in June at the age of 98, Baugh toured the British Normandy Memorial, which overlooks the beach where he fought.

“I would like to see children coming all of the time,″ he said. “Because they’re the people we need to tell what’s happened, and those lads that didn’t get back — to remember them.”

Chelsea Pensioners raise their hats as they offer three cheers for Britain’s Queen Elizabeth II, as they take part in their Founders Day parade in London, June 7, 2012. (AP Photo/Alastair Grant)

NASA scraps Artemis I launch due to potential hurricane threat

/ NASA still hasn’t decided whether to roll the rocket back to the Vehicle Assembly Building, a process that could delay its mission...
Read more

Microsoft started rolling out the Windows 11 2022 Update this week. The update includes a long list of features to the operating system, including...
Read more