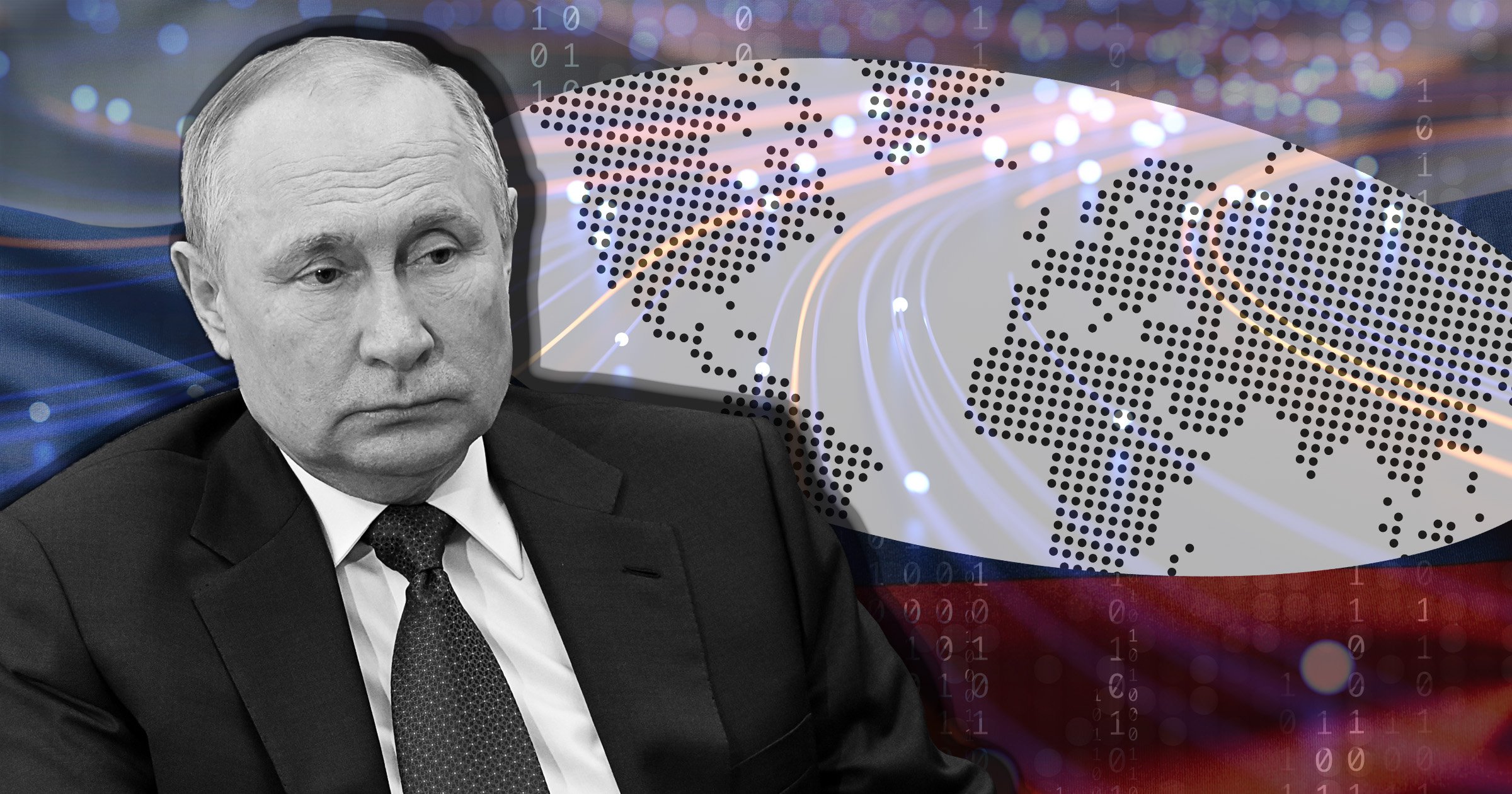 Russia has been amassing a stockpile of malware ready to unleash on computers across the West in retaliation for economic sanctions, a former British diplomat has warned.

These include excluding several Russian banks from the Swift global payment system and freezing foreign assets of a number of high profile individuals from the country.

The Ruble fell by almost 28% yesterday – and was overtaken by Bitcoin – forcing Russia’s central bank to hike the interest rate from 9.5% to 20% in an emergency move to prop up the currency.

Ordinary Russians now face a deep recession and a dramatic crash in living standards as a result of their leader’s decision.

Ukraine has been the victim of Kremlin-backed cyber attacks since the annexation of Crimea in 2014.

But Danny Lopez, who worked as a British diplomat to the US during the crisis, fears these attacks will be ramped up as Russia becomes increasingly desperate in the face of escalating sanctions.

‘You can increase the strength of those sanctions day by day, and we absolutely should, but it’s still unclear as to when they start really working, and there will be a degree of pain that comes with them,’ he told Metro.co.uk.

‘The risks are absolutely huge. I genuinely think that organisations, not just in the Ukraine but also in this country, need to prepare for an attack.

‘Regardless of how this plays out, the intensity, number and harshness of our sanctions is going to increase.

‘Just as those sanctions are ready to be released, Russian sponsored cyber attacks have been developed for the last few months.

‘There’s no doubt an inventory of prepared malware that can be deployed to exploit weaknesses. And they are going to be deployed on the countries that lead the charge in sanctions.

‘It’s not like the cyber bad actors are waiting to come up with this – they have a stockpile of malware that can be deployed whenever they want.

‘They will be monitoring weaknesses and specific threat vectors over the past weeks, months and years, and will be ready to exploit them, there’s absolutely no doubt about that.’

Mr Lopez, who is now CEO of cybersecurity firm Glasswall, says computer disabling malware unleashed on Ukrainian targets as part of Russia’s attack had a timestamp of December 21.

This means the plan to infect hundreds of computers with this wiper malware would have been hatched two months before.

And cyber saboteurs are exploiting weaknesses that the targets aren’t even aware of yet – known as zero day vulnerabilities – making attacks much more likely to succeed.

‘We have to be prepared for the fact that this is now a zero-day vulnerability nightmare that everybody has to be ready for,’ Mr Lopez added.

‘Digital capabilities that we’re so used to in our day-to-day lives can be brought to their knees very quickly.

‘It can have a big impact on the services that we just take for granted every day. I think it’s important to realise that more sanctions mean greater threats when it comes to malicious code coming our way and we need to expect and prepare for an attack.

But he said Ukraine and its Western allies have to ‘be prepared for the pain’ – both from the economic fallout from cutting off Russia’s economy, and retaliatory cyber attacks.

He said companies in Britain and elsewhere need to take extra steps to keep their systems safe and be as ready as possible when receiving files carrying malware.

‘The easiest way to create mayhem across organisations is by double clicking on an attachment, a pdf, a Word document an Excel document, and unleashing malware that has terrible consequences.

‘When you double click an attachment you would hope that typically it’s been through a firewall and anti-virus technology, the reality is that that’s not efficient in today’s world.

‘A lot of these attacks can have crippling effects and they start in the simplest way possible. I opened up the wrong attachment, I inadvertently shared my passwords that I shouldn’t have.

‘I thought I had multi-factor authentication and I didn’t, I was meaning to upgrade my firewall and never did, those are the vulnerabilities that are going to be exploited, and if you’re not ready you’re likely to suffer the most.’

‘We’re past the point of will we be the victim of cyber attacks. My view, very clearly is that we have to expect it and we have to prepare for it.’

Even if Western institutions aren’t targeted, authorities in the US have warned of attacks in Ukraine unintentionally causing damage elsewhere.

A joint advisory issued by the US Cybersecurity and Infrastructure Security Agency (CISA) and the FBI said: ‘Further disruptive cyberattacks against organisations in Ukraine are likely to occur and may unintentionally spill over to organizations in other countries.

‘Organisations should increase vigilance and evaluate their capabilities encompassing planning, preparation, detection, and response for such an event.’

Russia is well-known for its state sponsored cyber warfare, and Mr Lopez believes we’ll be seeing much more of it in the coming months.

But the country’s opponents are fighting back, as Ukraine recruits a volunteer ‘IT army’ of security researchers and hackers to carry out cyber attacks on 31 Russian targets.

These entities include government agencies, critical infrastructure, and banks, as the besieged nation plays Moscow at its own game.

The group have also leaked a Russian Ministry of Defence database and disabled the websites of Russia Today and several government departments.

A member wearing a Guy Fawkes mask whose voice is disguised by a computer left Vladimir Putin a chilling message after declaring a ‘cyber war’ on the Kremlin.

He said: ‘Your regime has no respect for human rights or the self determination of your neighbours.’

The figure goes on to detail the horrific damage and displacement the invasion has created and the resulting refugee crisis for the people of Ukraine.

He adds: ‘You have criticised the US military and NATO for their occupation and bombardment of the middle east, which is certainly a fair criticism.

‘But you have shown that you are no better than the imperialist governments that you criticise, and the whole world can see through your propaganda.’

The international hacker collective claims it has successfully breached over 300 Russian targets in just two days. Now it’s offering a payment in Bitcoin to Russian soldiers to hand over their tanks.