Now in Kingston, Ont., terrorism survivor aims for a future of helping others 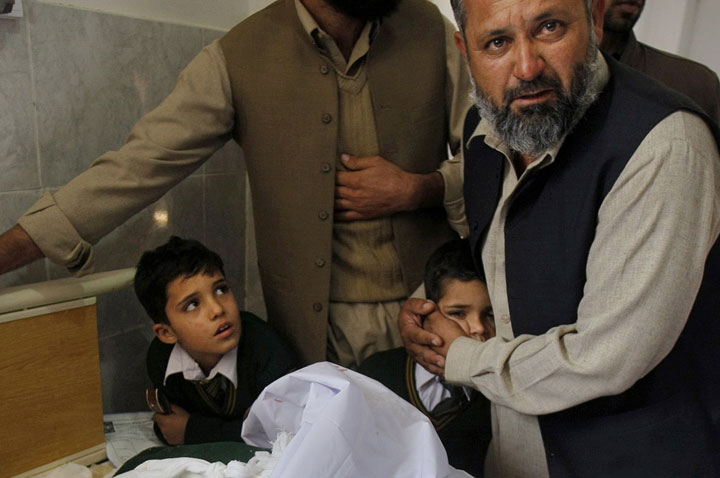 A young man who survived a deadly Taliban attack in Pakistan in 2014 is now in Kingston, Ont., and preparing to go to school.

It was also the day he says he started his second life.

Just 16 years old at the time, Khan says it was a normal morning at Army Public School and College in Peshawar, Pakistan.

While in the auditorium listening to a seminar on first aid, a small group of Taliban militants broke into the school.

“They went row to row and they shot the students and staff and this all happened in front of me,” he recalled.

The violent scene is permanently burned into his memory.

Khan says his friends and teachers were killed while he watched and prayed for his life.

When the shooters left the auditorium, Khan realized he had been shot three times, in the hip, arm and back.

He and his friends escaped the auditorium, crawling over their classmates, and hid in a classroom until the military rescued them.

“I was feeling terrified,” he said.

He would then spend one month in hospital being treated for his injuries and confronting the terror of what had happened to him.

It was at this time that he truly began to consider his future and his new lease on life.

A year into Taliban rule, Afghans fear Canada has left them behind

“There must be a reason that I am here today breathing. Fine, I’m injured, but I’m alive,” he said.

Khan then did the unfathomable: he returned to the same building in which he watched his friends and teachers die and finished his education.

“I have to give those terrorists a message that we are not afraid of you and we will continue our studies in the same school no matter what happens,” said Khan.

A month after the attack, then-president of the Pakistan Canada Association of Kingston Tony Atta-ur-Rhman met Khan and the two quickly formed a tight bond that eventually would bring Khan to Kingston.

“I found a lot of things in this individual. He has a lot of motivation, he wants to do something for humanity,” said Rehman, who led a small delegation from Kingston to Peshawar to bring a book of condolences signed by Canadian dignitaries.

In June, Khan landed in Kingston and since then has been looking to get an education to become a nurse.

He was inspired by those who provided him with round-the-clock care in the month following the attack.

“Being in Kingston, I feel so happy. I’m so glad to be here among those people who care about others,” said Khan.

He said he someday hopes to start an organization that will help people who have survived trauma like he did, and to eventually bring it back to Peshawar.