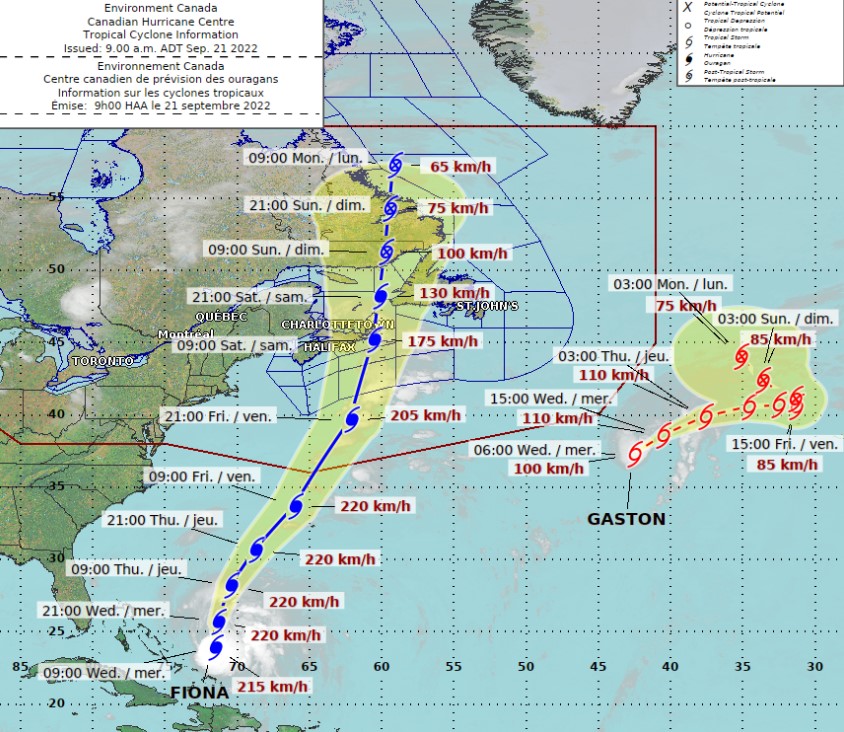 Nova Scotia’s Emergency Management Office will hold a briefing Wednesday afternoon as the province prepares for the arrival of Hurricane Fiona.

In a release, the province said representatives from EMO, as well as “key infrastructure partners and service providers,” will speak with media about preparations for the approaching storm.

The event begins at 2:30 p.m. AT and will be livestreamed on this page.

In a release, EMO advised Nova Scotians to prepare by doing the following:

“NSEMO is working with Environment Canada, other provincial departments, municipal emergency management offices and other partners to gather information and identify possible local risk areas in advance of the approaching storm,” the release said.

In an early Wednesday morning update, Environment Canada said Fiona is expected to impact the eastern shore on Friday, as it transforms into a strong post-tropical storm.

The weather agency said there are indications of a deep hybrid low-pressure system, which possesses both tropical and intense winter storm-type properties. Fiona could bring very heavy rainfall and severe winds over the weekend.

“This storm is shaping up to be a potentially severe event for Atlantic Canada,” Environment Canada said.

Fiona strengthens into Category 4 hurricane as storm heads toward Bermuda

Canadian Hurricane Centre meteorologist Ian Hubbard told Global News Wednesday that regardless of whether it’s classified as a post-tropical storm, or a hurricane, “we’re still going to see very significant impacts from this.”

“There’s going to be a lot of energy, a lot of rain, and a lot of wind associated with that, regardless of what the storm is categorized that at the time,” he said.

“Even if you hear later on in the week that it’s no longer a hurricane, it doesn’t mean that things have gone away and we’re out of the water.”

Fiona has strengthened to a category 4 hurricane and as of Wednesday morning was about 1,100 kilometres southwest of Bermuda.

— with files from Karla Renic