‘Not Quite on Board’: Parents Proving a Tough Sell on Covid Vax for Teens 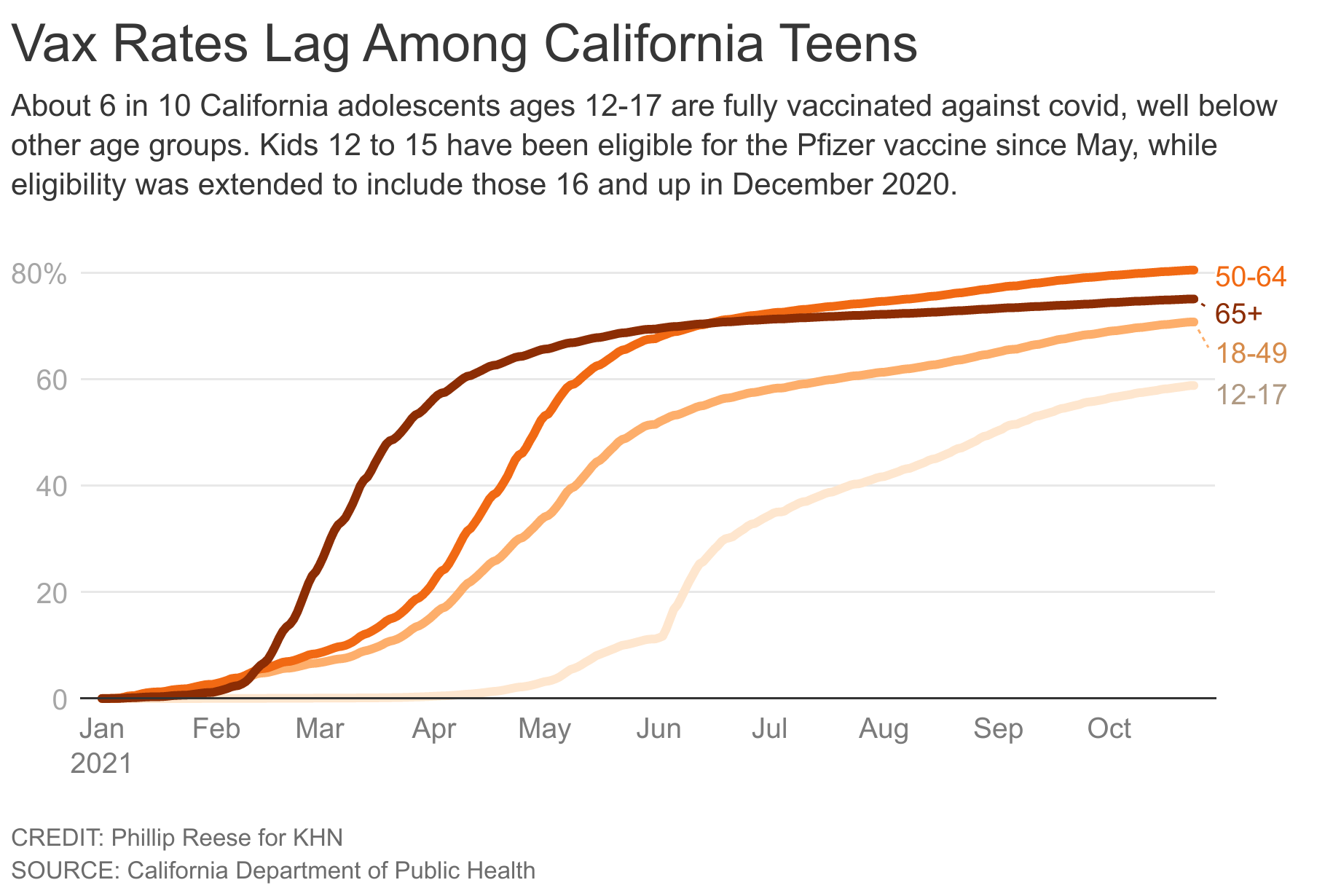 Even as the U.S. prepares to roll out a covid-19 vaccine to elementary school-aged kids, its efforts to inoculate teenagers — who have been eligible for the shot since May — continue to meet with a lackluster response.

So far, about half of kids 12 to 17 are fully vaccinated in the U.S., compared with nearly 70% of Americans 18 and older. Pediatricians expect it will be even harder to persuade skeptical parents of younger children to get their kids inoculated. Many are concerned about the potential unknowns of a relatively new vaccine compared with the low risk of serious illness covid poses for children.

A recent poll from KFF found 27% of parents of children 5 to 11 said they plan to get them vaccinated “right away,” while 30% said they would “definitely not” get the vaccine for their 5- to 11-year-olds. More than three-quarters of parents of children in this age group reported they were “very” or “somewhat” concerned that not enough is known about the long-term effects of the vaccine in kids.

“I’m not quite on board with everybody getting vaccinated,” said Tara Currier, 42, a mother of four in Marysville, California, who decided not to vaccinate her three older children, ages 12, 14 and 16. She said she also plans to delay vaccinating her 10-year-old daughter.

While she is fully vaccinated herself, Currier said she won’t vaccinate her children until she can be certain the shot is “actually a protection and not something that’s going to affect their bodies later on. I don’t know that can be answered yet, because the vaccine hasn’t been seen in people for very long.”

Public health officials and leading experts have been increasingly vocal in emphasizing that while children are at lower risk of serious illness from covid, they are not at zero risk. Nearly 6.3 million children have tested positive for covid, and more than 580 have died, according to the American Academy of Pediatrics. A small percentage have developed long-term symptoms.

They also stress that vaccinating children is essential to slowing the spread of the virus in the broader population. Nationwide, more than 45 million people have been infected by SARS-CoV-2, which causes covid, and more than 745,000 have died.

The Food and Drug Administration authorized the Pfizer-BioNTech covid vaccine for emergency use in children ages 12-15 in May, after approving the same shot for teens 16 and older five months earlier. On Friday, the agency authorized for emergency use a smaller dose of the vaccine for children ages 5-11, and shots are expected to be available this week following signoff by the Centers for Disease Control and Prevention.

In clearing the Pfizer vaccine for children and teens, the FDA said ongoing clinical studies show children and adolescents face greater risks from covid and its potentially devastating side effects than they do from a rare side effect of the vaccine involving inflammation of the heart reported in some young adults.

Still, California offers a lens on the challenges health officials and pediatricians face in persuading parents nationwide to embrace the new shots. The state ranks in the nation’s top quartile in overall vaccination rates, with 72% of people 12 and older vaccinated, according to the CDC. But that number masks vast disparities among the older and younger age groups.

In addition, teen vaccination rates vary hugely by region, another microcosm of the U.S. While many of the wealthier urban and suburban counties along the California coast boast vaccination rates upward of 70% for kids 12 to 17, multiple counties in the state’s rugged north report fewer than a quarter of that age group are vaccinated.

Marin County is one of the state’s success stories. Relatively wealthy, decidedly Democratic and overwhelming white, the county had vaccinated 93% of kids 12 to 17 as of Oct. 19, according to the California Department of Public Health. That’s more than twice the rate of 12- to 17-year-olds vaccinated in rural Madera County in the Central Valley; and it dwarfs the 16% of kids 12-17 vaccinated in Modoc County in the state’s mountainous northeast.

When younger teenagers became eligible in the spring, public health officials in Marin County set up two mass vaccination sites with “lots of fanfare and confetti and a ribbon-cutting kind of feeling,” said county public health officer Dr. Matt Willis. Families were eager, and within 10 days, the county had vaccinated half their adolescent population.

For parents who were more hesitant, “pediatricians were crucial,” Willis said. Dr. Nelson Branco, a pediatrician in Larkspur, said his practice waited a few weeks before opening its own vaccination clinic. They checked the vaccine registry for their 4,000 12- to 17-year-old patients, identified 800 who had not been vaccinated, then sent out an email blast inviting them to one of their weekly clinics and to call with any questions.

“We found that there were lots of parents of teenagers who are very anxious for their kids to get back to more normal activities,” said Branco. “We’re seeing the same things with parents of younger kids. The question is ‘When?’ not ‘Should I?’”

In a rural county like Madera, which hasn’t voted for a Democratic president since Jimmy Carter, the low vaccination rates reflect factors beyond a conservative political bent, said Dr. Nicole Webb, a pediatrician at Valley Children’s Healthcare in Madera. Rather, many residents face logistical challenges that don’t exist for Californians in the suburbs and cities, where a pharmacy or doctor’s office is a short drive or transit ride away.

“I think the tempting thing is to try to make global generalizations based on political or ideological blinds, but I think it’s actually a lot more complicated than that in a place like this,” Webb said.

Even in counties reporting high teen vaccination rates, there are pockets where pediatricians are struggling to convince wary parents. Santa Clara County has vaccinated 75% of kids 12 to 17, according to CDPH. But at her practice in central San Jose, Dr. Amna Khan said most of her patients are on the fence.

Santa Clara Valley Medical Center sees mostly Medi-Cal patients, and many of Khan’s patients are recent immigrants. “In my patient population, they have a lot of reason to distrust the government and medicine in general,” Khan said. “It’s not a political statement. It’s distrust from things they’ve heard from their family or church or neighbors.”

Often, these conversations are a “difficult dance” that Khan must navigate with cultural sensitivity and help from translators. Sometimes, she faces the minefield of parent-teen conflict, with arguments breaking out in the exam room between kids who want the vaccine and parents who refuse.

No matter where parents are raising their kids, pediatricians said, the common factor driving their decision to vaccinate — or not — is concern about their child’s safety.

Parents lining up to vaccinate their children are worried about the threat of covid. Parents hesitant about the shot are worried about possible side effects of the vaccine. Somewhere in the middle are parents unsure what to think because of the conflicting information they have gotten from social media or friends.

Even among parents who have unquestioningly vaccinated their children for other diseases, the choice on covid isn’t an obvious one.

“Parents are now saying, ‘You know what? I don’t think this is right for my kid. I don’t think I’m going to make this decision, or at the very least I’m going to wait at least six months, maybe a year or maybe longer before I even consider this for my child,’” said Jessica Calarco, a professor of sociology at Indiana University who has been monitoring a group of moms in Indiana throughout the pandemic.

“They’ll say, ‘You know what, my kid wears masks. We wash our hands. We are responsible with play dates. And so, the vaccine just isn’t necessary because we’re doing enough, and my kid is healthy enough that they will probably be fine.’”

Doctors and public health officials say they find themselves regularly explaining to parents that covid is indeed harming kids.

“There have been more than 35 pediatric deaths in California alone, and this is more deaths than we see with flu,” Dr. Erica Pan, California’s state epidemiologist, told reporters last week. “This simply is not an acceptable number of child deaths when such effective and safe prevention is available.”

Covid has triggered multisystem inflammatory syndrome in children, a potentially life-threatening condition in which the immune system attacks the body and impedes organ function, in more than 660 California kids since March 2020, Pan said. Six have died.

California is slated to have more than 1.2 million doses of the weaker version of the vaccine for kids 5 to 11 the first week the vaccine is approved for emergency use, Pan said. Pediatricians will be crucial to the state’s efforts to vaccinate kids, along with clinics at school sites and door-to-door campaigns by community leaders.

Phillip Reese, an assistant professor of journalism at California State University-Sacramento, contributed to this report.

Brubaker and Phillips’ Criminal May Be Prime Video’s Next Adaptation

Right now, Prime Video is on a pretty good streak with adapting various properties to TV. Between Critical Role, Jack Reacher, and Invincible, plus...
Read more