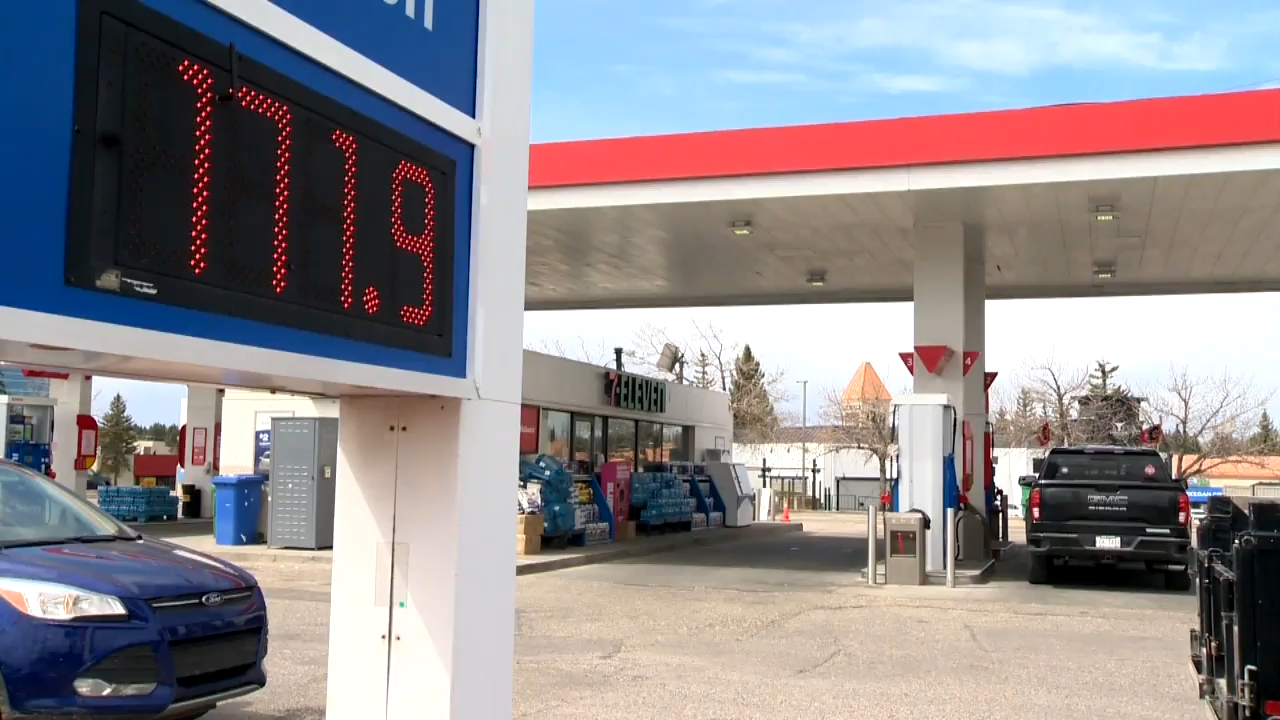 Gas prices in Alberta are starting to edge up after hitting a 22-month low this week, just days before the province is set to stop collecting the provincial gas tax on Jan. 1.

And it’s raising the question: are gas retailers increasing prices so they can pocket the extra money, like then-Premier Jason Kenney accused back in July?

Data from GasBuddy shows on Dec. 24, prices hit $1.22 per litre, the lowest price seen since around March 2021. However on Friday, some stations were posting prices of up to $1.34 per litre.

The Alberta government will suspend the provincial fuel tax for six months starting Sunday. The province said it will save Albertans 13 cents per litre at the pump.

However, drivers have only been paying part of it since October because of changes made under Kenney, meaning gas prices will only dip by about four cents.

Vijay Muralidharan, director for R Cube Economic Consulting Inc. in Calgary, said the move will have an impact for Albertans, especially because for the first six months the reduction will not be based on the price of crude oil, unlike the last time the fuel tax was removed.

“This one is a flat reduction in fuel taxes,” he said.

Muralidharan said gas retailers can’t and won’t raise gas prices so they can pocket the extra cents per litre.

“The retail margins in Canada are a perfect competitive environment. They can’t fix pricing like that. It’s not easy for them to do it because you have competing prices from neighboring provinces,” he said.


However, the energy critic for the NDP isn’t so sure.

“I hope that when the tax is removed that we see gas prices fall because that is money coming from the government that is meant to go into the hands of Albertans who are struggling right now. It’s not meant to go to pad profit lines,” said Kathleen Ganley.

Ganley said since Kenney demanded the investigation this summer, neither the Opposition nor Albertans have heard anything about the results.

“I think it’s just one more example of the UCP claiming that they want to help Albertans, but not taking the necessary practical steps to actually do that.”

Energy Minister Pete Guthrie did not respond for comment at the time of publishing.

Muralidharan believes winter storms and frozen equipment in the United States is part of what’s causing the prices to go up.

He said the rising prices are due to four factors: crude pricing, refinery margins, retail margins and taxes.

Muralidharan said in the last few days refinery margins have gone up by about 12 cents a litre because eight to ten refineries were shut down in the United States due to winter storms.

“They were shut down for over a week, which meant that supply was restricted for diesel and gasoline, and that created the refinery margins to jump,” he said.

Once this supply crunch irons out, he said prices should go back down.

Canadian oilpatch likely to surpass 2022’s production record, but not by much

Looking ahead, Muralidharan said refinery maintenance may cause prices to rise a bit in the first quarter of 2023, but the big factor affecting change would be unplanned outages.

“If these unplanned outages and the war in Ukraine gets intense, then you could see a positive spike to pricing. But in my estimation, I’m more and more tuned towards the downside,” he said.

“I think the higher interest rates are going to hit the economy hard and we’re going to have an economic slowdown coming in Canada, which should ease gas pricing.”