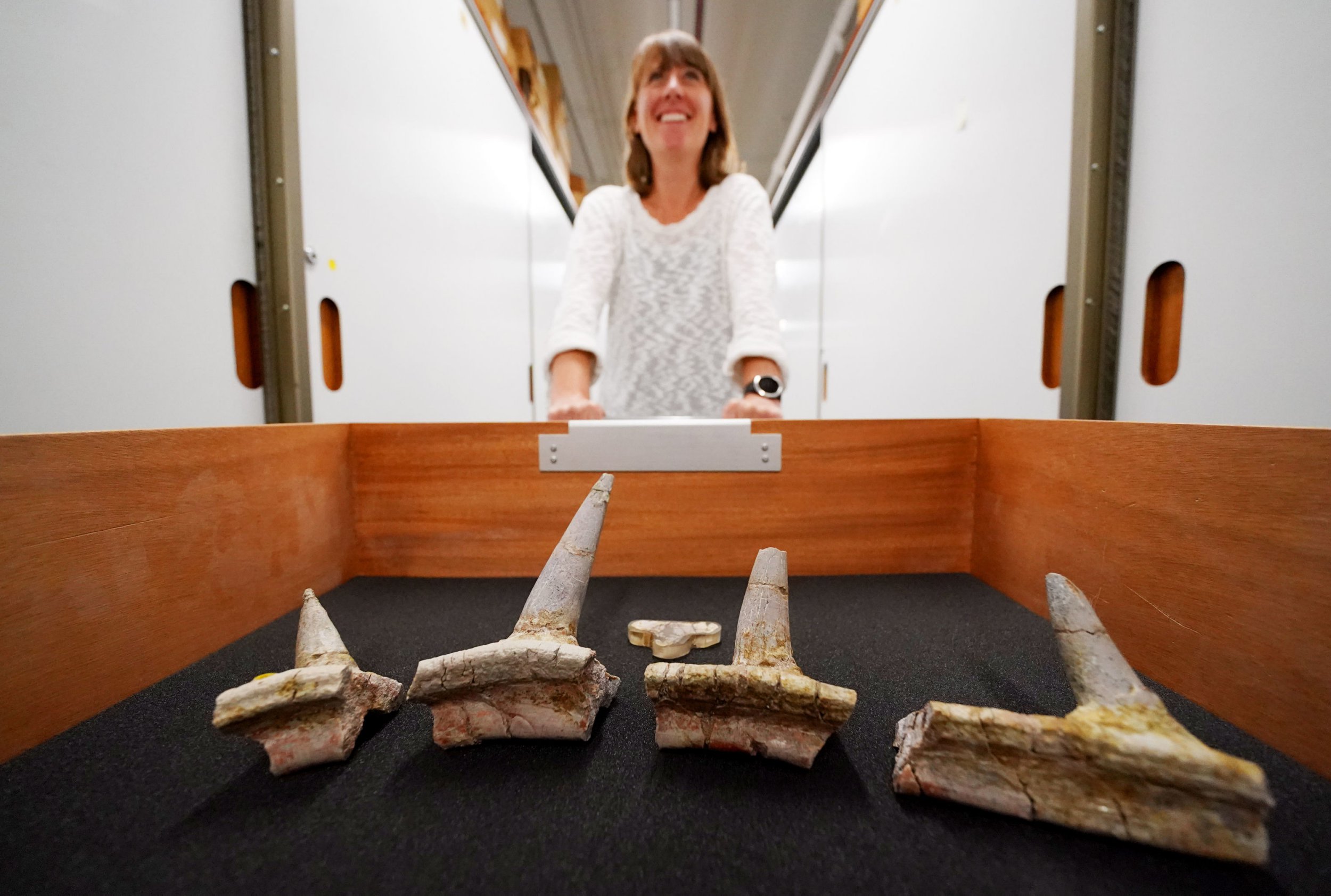 An unusual fossil with a series of spikes has been revealed to be the remains of a new species of dinosaur.

The fossil of an ankylosaur rib, found at the Boulahfa site in the Middle Atlas mountains of Morocco, is believed to be at least 20 million years older than any of that species found before.

What’s more, scientists described the shape of this newfound specimen as ‘unusual’.

Ankylosaurs were a herbivorous group of dinosaurs known for their armoured tank-like bodies and a club-shaped tail tip.

Palaeontologist Dr Susannah Maidment, a researcher at the Natural History Museum, told the PA news agency existing fossils of ankylosaurs are from the Cretaceous period, roughly between 145.5 and 65.5 million years ago, but this bone is around 165 million years old, dating to the Jurassic era.

She said: ‘Ankylosaurs are well known from the Cretaceous period, particularly from North America and from Asia, and we know a whole bunch of different species but this is completely different from all of those.

‘This is a new species of ankylosaur, it’s much older than any other ankylosaur that we’ve found but also it has this really, really strange morphology.

‘This fossil is about 165 million years old. It’s from the Middle Jurassic, a time period where we have really hardly any evidence of ankylosaurs at all.’

Ankylosaurs have been characterised by their series of bony plates and spikes that are embedded in their skin.

However, the new fossil – the first from the African continent – shows long spikes directly attached to the bone, which Dr Maidment described as unusual.

‘This specimen actually has spikes and an osteodermal plate fused to a rib – so it’s attached firmly to the rib and couldn’t have come apart.

The specimen is so unusual that at first the researchers wondered if it could be a fake.

Dr Maidment acquired the rib from a fossil dealer in Cambridge in 2019, and has named the species Spicomellus meaning collar of spikes

She had earlier led the study on a new species of stegosaurian dinosaur – the oldest definite stegosaur ever found – which had been found at the same site.

‘We thought it (the ankylosaur fossil) was a stegosaur because it was from a site in Morocco where we named a stegosaur last year and we saw that this fossil comprised a series of spines, and stegosaurs do have some spines on their body,’ she said.

Further inspection of the fossil showed a particular texture of the bone, which forms a cross-hatch type pattern, that is unique to ankylosaurs.

Dr Maidment, honorary senior lecturer at the University of Birmingham, hopes to visit the site in the future and learn more about why there has only been one ankylosaur fossil found in Africa so far.

She added: ‘Prior to this find we’ve had no ankylosaur fossils from Africa at all from any time period in the Mesozoic and we don’t know why that is.

‘It could be because they weren’t a very common part of ecosystems in Africa or it could be that we just haven’t found their fossils yet.

‘This is a new site where these dinosaurs are coming from so perhaps if we keep looking there we’ll be able to find more of this skeleton because it is rather fragmented at the moment.’

The findings are published in Nature Ecology and Evolution.


MORE : Skeleton of gigantic dinosaur that rivalled the T-Rex dug up in Asia