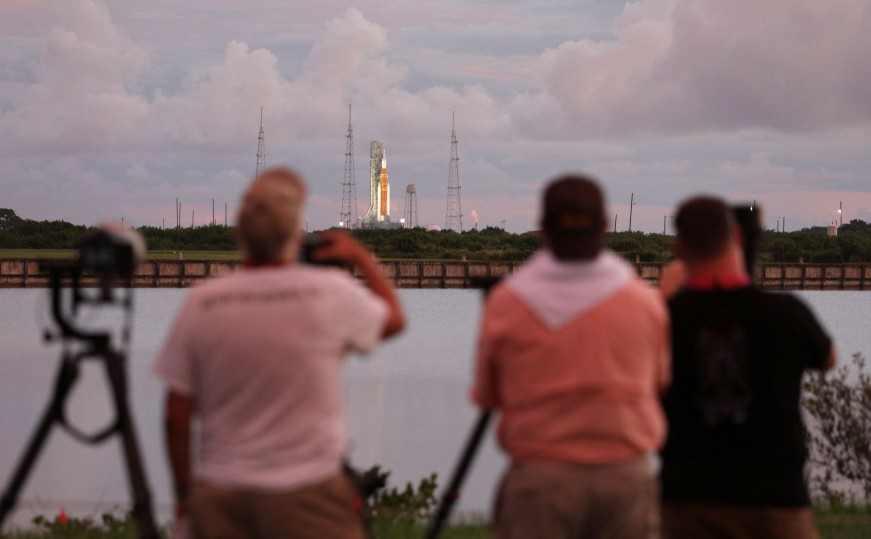 Nasa has officially called off today’s planned launch of its moon rocket, Artemis 1, due to an engine issue.

A ‘conditioning’ issue with one of the four engines on the rocket’s main stage held up the launch which was scheduled for 1.33 pm.

While engineers tried to figure out a solution, Nasa’s launch director called for the launch to be scrubbed.

Roughly two hours before the launch window was due to open, engineers struggled to configure one of the rocket’s four engines for launch and examined a buildup of frost detected on an inner tank seal, according to Nasa.

Engineers suspected the frost was from a potential crack in one of the joints connecting the rocket’s fuel tanks, Nasa said, but that issue was resolved after determining the crack was on foam insulation and not the joint structure.

The engine ‘didn’t get the high accuracy temperature that they were looking for,’ said launch control communicator Derrol Nail.

Ultimately, the issue that came up was an ‘engine bleed’ that could not be resolved. ‘Engineers are continuing to gather data on the bleed’ as Nasa eyes the next possible launch window of September 2.

The 32-story-tall, two-stage Space Launch System (SLS) rocket and its Orion crew capsule were due for blast-off from the Kennedy Space Center in Cape Canaveral, Florida, during a two-hour launch window beginning at 1.33 pm today.

Hopes of a liftoff within that window dimmed as engineers examined an apparent crack in some thermal protection material within the core stage, and were trouble-shooting an additional issue with one of the rocket’s four engines.

The next available window for a launch is September 2 and September 5.

Billed as the most powerful, complex rocket in the world, the SLS represents the biggest new vertical launch system the US space agency has built since the Saturn V flown during the Apollo moon program of the 1960s and 70s.

One issue cited by Nasa officials last week as a potential show stopper for today’s launch would be any sign during rocket fueling that a newly repaired hydrogen line fitting had failed to hold.

Nasa officials said on Sunday they were also eyeing a potential, but minor, helium leak in launch pad equipment.


MORE : What time is the Nasa Artemis launch and how to watch in the UK?


MORE : Nasa plans to return to the Moon as early as August