Home Tech News Museum of the Future: Inside ‘the world’s most beautiful building’
Tech News

Museum of the Future: Inside ‘the world’s most beautiful building’ 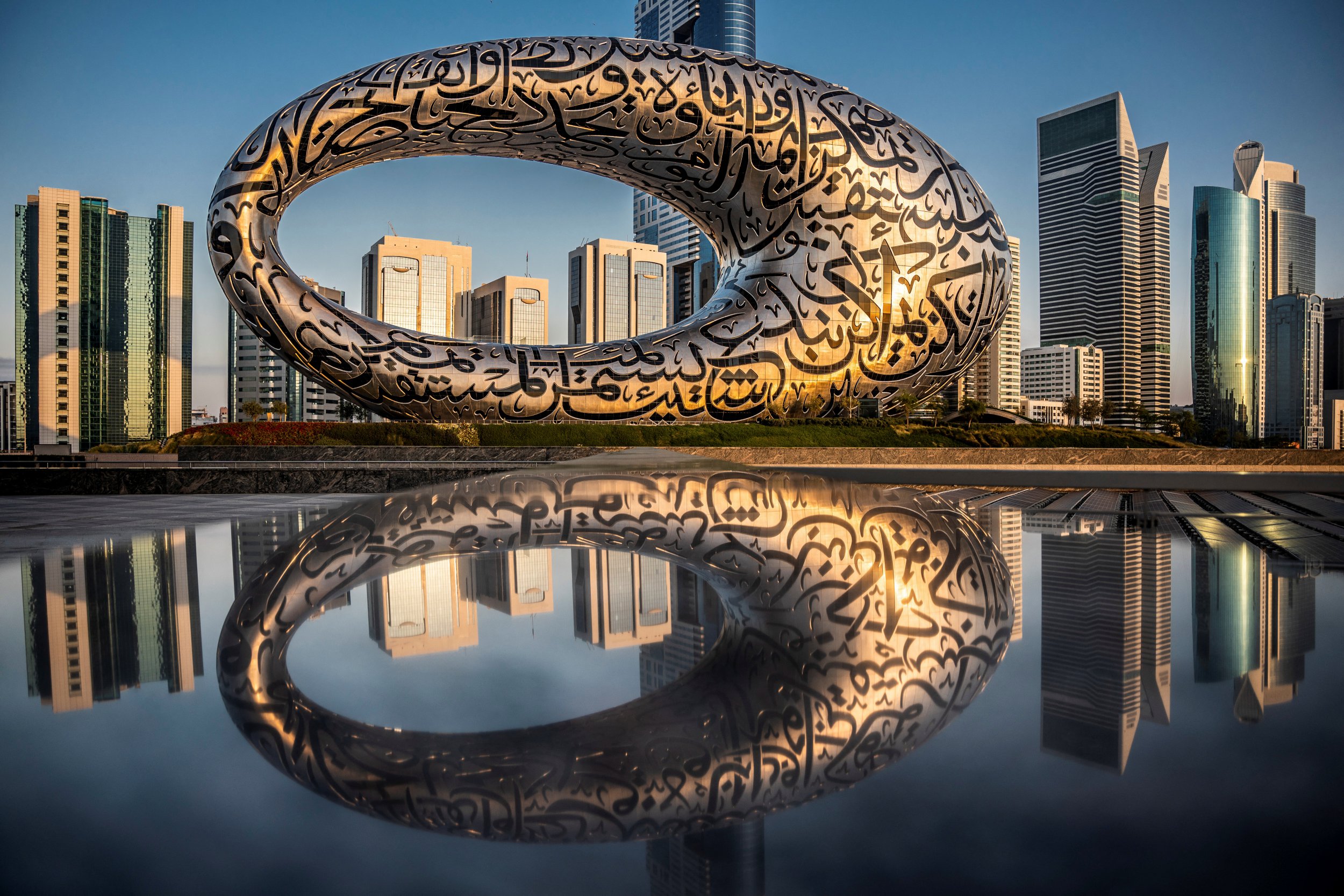 What started off in 1999 with the Burj Al Arab, a sailboat shaped symbol to put Dubai on world travellers’ wish lists has worked very well for the country. The United Arab Emirates saw a tourism revenue of £28 billion in 2019, up from £15 billion the previous year.

At a modest 77 metres, The Museum of the Future is far from being a part of Dubai’s skyline that features the world’s tallest tower, the Burj Khalifa, but it does succeed in taking its place among Dubai’s iconic buildings.

Even before its completion, tourists were taking pictures with the the museum’s incomplete framework in 2019, comprising 2,400 diagonally intersecting steel beams.

But what makes the UAE boldly claim that this is in fact ‘the world’s most beautiful building’?

It could be that it’s a building whose shape you’d be hard pressed to describe to someone who hadn’t seen it. Unlike the Shard, the Gherkin or even the Pyramids which have very real visual descriptions, the Museum does not easily fit an elementary geometric shape or real world example.

While you could describe it to an extent as something like an egg or a ring, the architectural term for the shape is a ‘torus with an elliptical void’.

‘There is nothing that quite evokes the shape,’ said Lath Carlson, executive director of the Museum of the Future who prefers to liken it to an eye.

A torus sounds about the right shape for a building that was supposedly designed by an algorithm, consisting of zero support columns, relying instead on a network of diagonal beams for support.

Local architectural firm Killa Design, which won the design competition for the museum in 2015, came up with the shape. According to the architect Shaun Killa, the solid part of the structure represents the knowledge that we have today while the void represents all that we do not yet know — the future.

The opening of the museum of the future coincides with Dubai’s turn to host the World Expo 2020 — the first country in the Middle East to do so — delayed by the pandemic. Keeping with the spectacle, the palindrome date of 22.2.22 was chosen for the launch.

While the pandemic pushed the construction of the museum over budget and time, it also gave builders a chance to adapt the exhibits to the be ‘pandemic- proof’ with minimal physical interaction needed.

Beyond the structure itself, the thing that catches your eye is the museums’s blinding stainless steel exterior, softened by elegant Arabic calligraphy on the facade. It certainly helps that Arabic is an elegant script with its delicate strokes, lending grace to a structure that otherwise risks being gaudy.

The calligraphy on the outside isn’t purely decorative either. The panels, all 1024 of them individually manufactured by robots, have dimples and grooves to reduce the steel panels from dangerously magnifying the desert heat reflected off them and burning objects in its vicinity.

The inscriptions on the facade also solve the problem of uplift from treacherous wind vortexes — a result of the building’s shape — by serving as stabilising air pockets.

During the day, the seven-storey structure is an imposing presence that houses a museum to transport visitors to the future while at night, it’s dramatically illuminated by 14 kilometres of LED lighting.

What makes a building ‘beautiful’ today could also be how sustainable it is and the Museum wins point here — the structure is powered by its own dedicated solar park.

As the name suggests, The Museum of the Future is the exact opposite of a museum as we know it. Instead of housing artefacts and history from the past, it seeks to take people on a journey of what the world could look like 50 years from today.

The concept definitely makes sense for a country as young as the UAE with a relatively short history of 50 years of frenetic development. So it’s not surprising that they would look to the future rather than bask in past glories.

Brendan McGetrick, Creative Director of the Museum says their competitors are Netflix and video games, not other museums.

‘We’re trying to make sure we create an experience which rewarded you for being physically present, that you couldn’t replicate online,’ he told Metro.co.uk.

The timed ticketed experience takes visitors to a spaceport in 2071 from where they are taken around the various exhibits by the museum’s digital assistant — Aya.

At one point you are standing on the deck of space station Hope, named after UAE’s Mars mission, 600 kilometres from Earth where you are invited to learn about the community of pioneers living and working on the station.

A fantasy charter in the space signed in the year 2037 reads: ‘While remaining proud of our national identities and history, the peoples of Earth have determined to transcend our former divisions and forge a common destiny’.

It’s an idealistic sentiment, portraying space as a frontier to bring humans together as opposed to a place of cutthroat competition.

Visitors are invited to experience a future with flying taxis, wind farms and a world powered by a massive structure orbiting the Earth that harnesses the sun’s energy and beams it to the moon.

The highlight of the museum is the ‘Vault of Life’ exhibit; a glowing, mirrored library illuminated with columns of glass cylinders housing the genetic code of thousands of species that have gone extinct.

Visitors are given a handheld device which they can use to point to any of the specimens and learn more about them.

Another room takes you to a space to apply science to rebuild some of the ecosystems that have been damaged as a result of climate change in the next 50 years.

The idea is to inspire visitors to mobilise emerging technologies to be able to repair our relationship to the natural world.

The museum also contains a floor dedicated to exhibiting near future technologies that will supposedly exist in the next five years. At the moment, it holds two concept autonomous vehicles and even a Jetpack .

‘This is the element of the museum which is ever evolving, and is nimble to adjust to new developments in technology or trends,’ said McGetrick.

The experience ends in a meditation space with elements like movement, water and light infused into it.

‘At the end of the adventure into the future, we want to give people the space to simply stop and reflect,’ said.

But the tranquility room feels anti-climactic and at odds with the other rooms that push for frenzied development in a short span of 50 years.

This feels especially true when you step outside onto Dubai’s buzzing financial district, next door to the Dubai Mall, the largest shopping mall in the world by space, arguably a temple of capitalism and unsustainable living practices.

On the top floor of the museum is an immaculate event space, dappled in light from the calligraphy windows, where workshops and conferences would take place. From here you could certainly believe you’re in the most beautiful building in the world.

The building reportedly cost £101 million but H.E. Omar Al Olama, UAE’s Minister for AI stressed that it costed ‘less than some of the pavilions at Expo 2020’.

‘This is a revenue generating building,’ he said comparing it to how the Burj Khalifa brings in revenue in with the commerce taking place inside, the real estate around it and even the advertisements projected on it.

The Museum of the Future is hoping to attract more than one million visitors a year, with half of them coming from outside the UAE.

The building has achieved LEED Platinum status, a rating reserved for the world’s most energy-efficient and environmental designs. The UAE is one of the nations that has made a lofty pledge to achieve Net Zero by 2050 but the Climate Action Tracker still rates the country’s climate targets and policies as ‘Highly insufficient’.

The Museum of the Future was clearly designed to project Dubai as a future forward, inclusive city but the calligraphy on its facade; poetry by a leader who is very much alive; belies its politics rooted in monarchy with a measured approach to various freedoms.

One of the inscriptions on the museum’s facade reads: ‘The future belongs to those who can imagine it, design it, and execute it. It isn’t something you await, but rather create’.

The UAE has taken it upon itself to create a future with hard deadlines on when to get there. As we gaze upon its many beautiful buildings, it’s easy to forget the cost of such swift development.

The Museum of the Future is certainly a sight to behold but whether it’s the ‘world’s most beautiful’ is up to the beholder.

Tickets for the Museum of the Future cost the equivalent of £30 per person.


MORE : Inside Dubai viewers unimpressed by ‘tacky’ solid gold scarf on sale for £100,000 as jeweler insists ‘it’s not much’