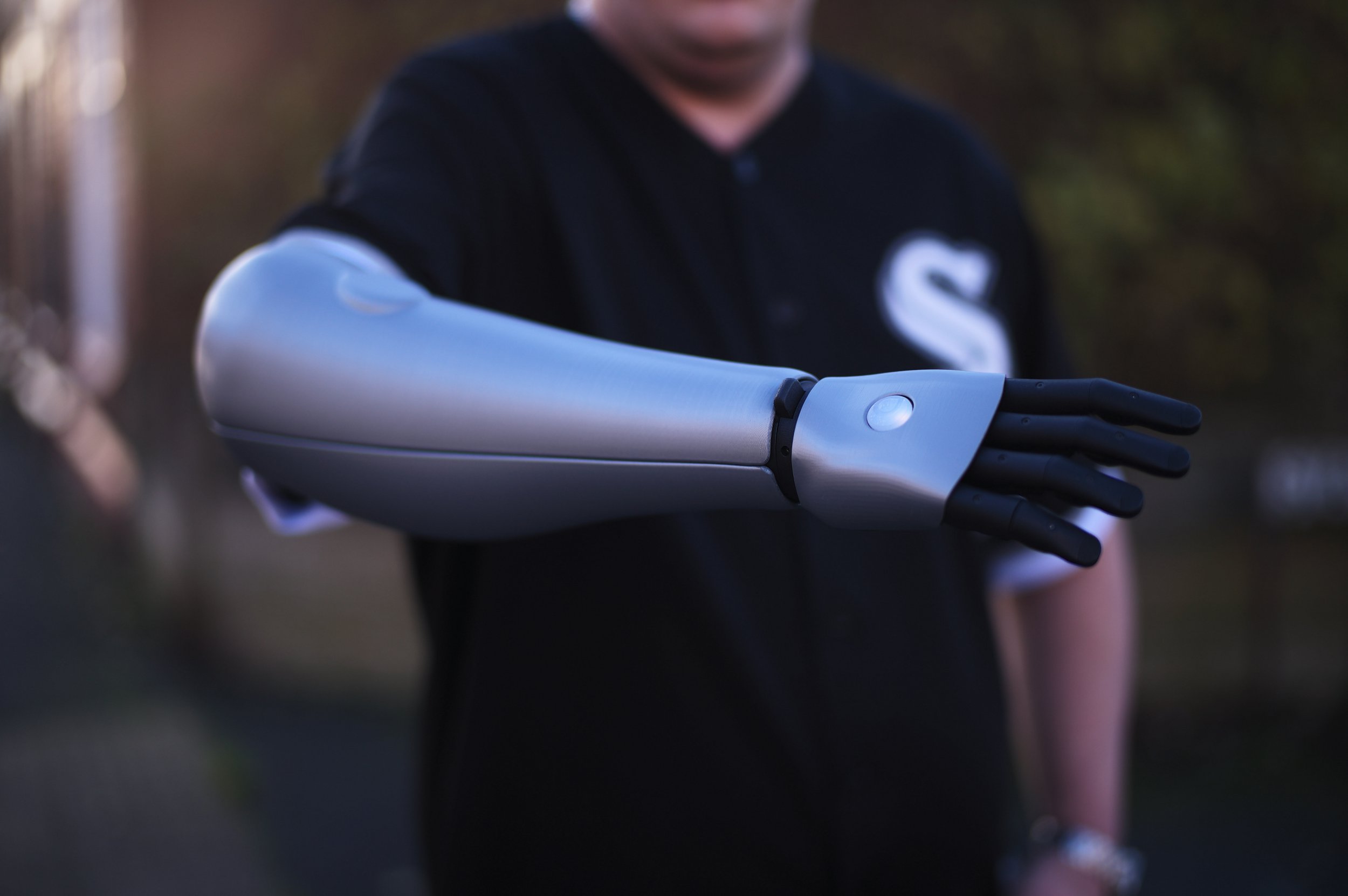 An amputee’s dream of having two hands has come true when he was fitted with a bionic arm – 35 years after he lost his own when he accidently shot himself.

Ryan Backos, now 38, blasted himself in his chest and arm with a gun when he was just three years old at his childhood home in Johannesburg, South Africa.

He spent two and a half months in hospital and had numerous operations to try to save his right arm – but eventually he had to have it amputated.

Ryan adapted to life with one arm over the years, but was left unable to do simple tasks such as using a knife and fork at the same time.

The contractions are then amplified and converted into hand movements.

Delighted Ryan said: ‘It’s always been a dream of mine to have two hands.

‘Now that I’ve got it, I’m able to go the supermarket and push the trolley with my right hand and look at the shopping list on my phone on my left hand.’

‘It’s just the small things that have made an incredible difference.

‘Before I would have to push the trolley, then stop and look at my phone, then put my phone back in my pocket and carry on pushing the trolley.

‘I then ended up forgetting things because I wasn’t able to look at my phone all the time.

‘I can now lock my hand into a position of holding something and I could actually push the trolley while checking everything on my phone.

‘I could even grab things off the shelf while still having my hand attached to the trolley.

‘It’s just made a phenomenal difference.’

Ryan, who has had his new arm for around two weeks, is now able to do things he could never do before like using a steak knife.

And he says the ‘life-changing’ arm has helped him complete every day tasks that he’d previously struggle with such as pick up a bottle.

Ryan said: ‘I’ve not been able to drive with it yet as I’m quite a big person so my chair doesn’t go far enough back.

‘The arm is in the way, so I’m still getting used to it to be then able to use it for driving.

‘I’m just practicing with it in my day to day life.

‘I’ve been able to pick up a bottle and pick up a ball and throw it so it’s just the small things.

‘I’ll be able to use a steak knife in the future when I do have a steak.

‘I also couldn’t use a knife and fork at the same time so it’s just small things like that that I’ve not been able to do before. It’s just helping me mentally.’

Ryan discovered Open Bionics during the pandemic, and began raising money to get a new arm but sadly he didn’t reach his goal due to Covid.

He then started a new role as a field account manager at Amazon and his manager suggested that he should re-start the crowdfunding campaign.

After receiving donations from family and friends, he was able to purchase his new arm which he’s described as something that’s ‘taking a lot of getting used to.’

Ryan said: ‘I absolutely enjoy it but it is taking a lot of getting used to.

‘Because I’ve not had a hand and I’ve been heavier on my left side, I’ve developed two curvatures in my spine.

‘This is from always using my left hand so my shoulder and arm on my left side are built up but on my right side it’s not so I get back pain.

‘I plan to use my bionic arm as much as possible, so it will build up my shoulder.

‘I know it will never fix it, but it will correct it a little bit.’

Ryan was brought up in South Africa, which he said was ‘hard and challenging’ as a lot of people teased him for having one arm.

He then moved to the south of Portugal, where his family are from, at the age of 20 and he moved to the UK six years ago where he still lives now in Widnes, Cheshire.

Ryan said: ‘It was hard and challenging as a lot of people teased me.

‘It was quite difficult but I always tried to look on the positive side.

I used to say to them that what they could do with two hands, I could do it with one.

‘But it was difficult, unfortunately that’s just kids for you and I was teased all through school which was quite hard.

‘Obviously when I got older, I got bigger and they didn’t actually see a point in doing it then.’

Samantha Payne MBE, co-founder of Open Bionics has said that ‘Ryan’s story is incredible’ and she is ‘thrilled’ that he’s got his new arm.

She said: ‘Ryan’s story is incredible.’

‘We’re thrilled that after a lifetime of waiting for an advanced bionic arm he has received his Hero Arm and is making great use of it.

‘Open Bionics wants to bring this technology to amputees in many more countries, if you’d like to support us please consider investing in our Crowdcube campaign which launches today.’

Grammys 2023: Beyoncé now the most decorated artist in Grammy history

The 2023 Grammy Awards were a historic night. Beyoncé is now the most decorated artist in the award show’s history after taking home four awards...
Read more