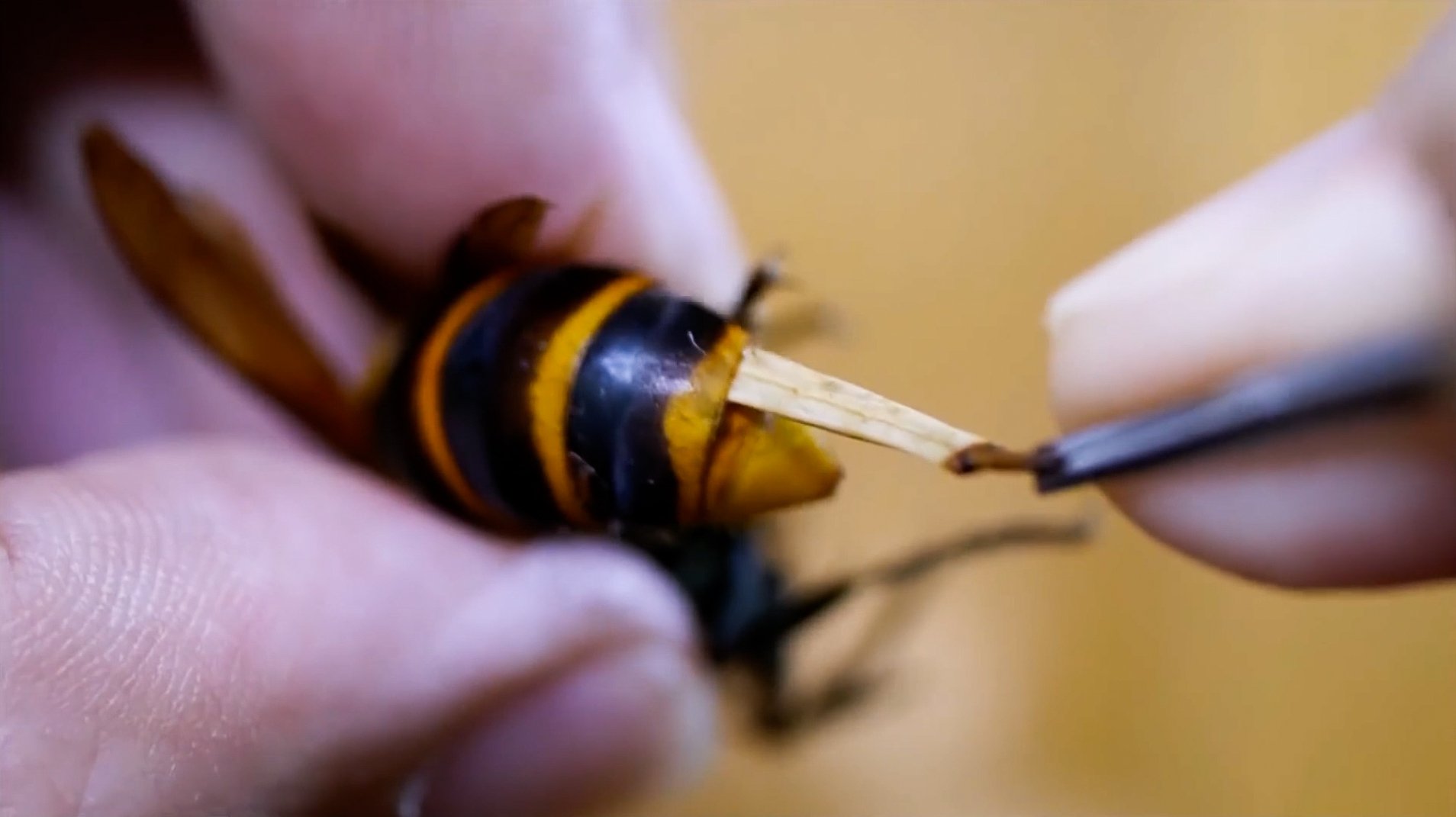 Getting up close and personal with a live murder hornet isn’t something many of us would rush to do.

However, we’re not insect enthusiast Ebira Mosura who decided to remove a living parasite from one of the hornets with some tweezers.

Murder hornets, in case you weren’t aware, aren’t to be trifled with.

They can grow as large as two-and-a-half inches long and are capable of delivering multiple stings, each carrying toxic venom. Which, in some cases, can be fatal.

Still, Mosura noticed one particular hornet in his home city of Tokyo was acting a bit strangely.

So naturally he caught the insect and brought it inside to ‘rescue’ it.

The hobbyist said he had a hunch it might have been infected with a parasite so decided to find out.

Footage shows the DIY vet using tweezers to pull a gooey, white worm from the murder hornet’s belly. All while the insect is still alive and he’s holding it between his fingers.

Ebira said: ‘It was hard to see but I was pretty sure that the hornet had a parasite in its belly.

‘I’m not a professional but you have to be knowledgeable to successfully do this.’

The self-proclaimed insect lover can be seen slowly pulling the parasitic worm from the hornet and laying it out on his finger.

He released the hornet afterwards and fed the parasite to his pet frog.

He added: ‘I was actually very sick that time. You could even hear me coughing on the video but I felt really bad for the hornet.’

‘I have seen that behaviour before on other hornets and wasps so I thought I should help the creature that time.’

The large parasite found inside the hornet’s stomach was a female Strepsiptera, which attaches to hosts such as bees, wasps, grasshoppers, and leafhoppers.

The parasite controls its host to avoid colony tasks and cluster on vegetation so it could mate with other Strepsipteras.

What are ‘murder hornets’?

The Asian giant, or ‘murder hornet’, is a fierce species of insect typically found in eastern and southeastern Asia.

They emerge in April each year from nests in the ground or in old tree trunks.

The murder hornet hunts many insects, but particularly targets honeybees.

As mentioned, they can grow as large as two-and-a-half inches long and are capable of killing humans with toxic stings.

Aside from the danger to humans, they also pose a huge risk to agriculture and the apiary industry by feasting on honeybees, with just a few being capable of wiping out an entire hive in hours.

Between 30 and 50 people die each year in Japan from the hornets’ stings.

When populations were particularly high in 2013 they killed 42 in one Chinese province alone.

Worryingly, the hornets can sting through most standard beekeeper suits, prompting experts to order specially reinforced ones to deal with them.

Unless of course your name is Ebira Mosura.

What you need to knowMicrosoft has stated Sony sold "more than twice as many" PlayStation 4 consoles than its lifetime Xbox One sales, according...
Read more

Walmart has looked at the field of streaming services and finally settled on Paramount Plus as a partner to bundle into its subscription service,...
Read more