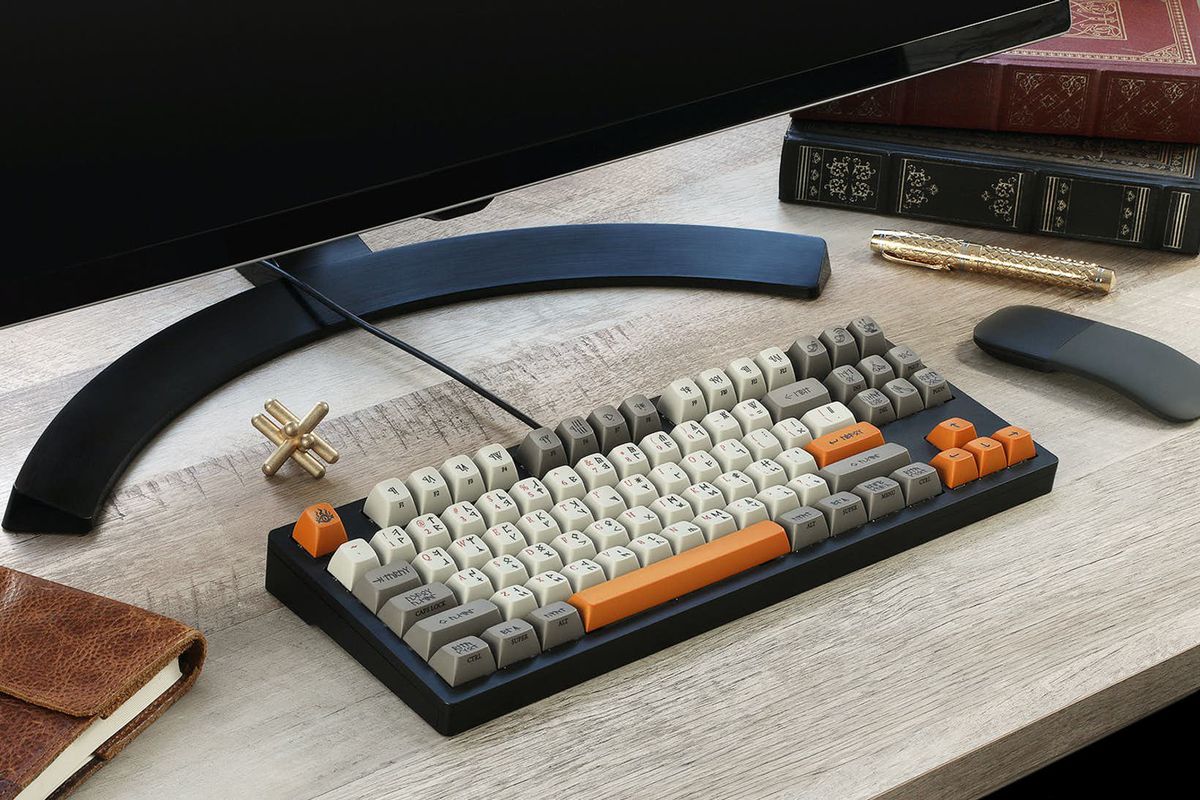 It began with the forging of the Great Keyboards. Sixty-eight keys were given to the 65 percent designs, smallest and most compact of all decks. Eighty-four keys to the 75 percent designs, great typists and gamers of the digital halls. And 108 keys were gifted to the race of full-size keyboard users, who above all else desire power. For within these keyboards was bound the strength and the will to govern any device.

But they were all of them deceived, for another keyboard was made. Deep in the land of Mordor, in the Fires of Mount Doom, the Dark Lord Jony Ive forged a master keyboard, and into this butterfly keyboard he poured his cruelty, his malice and his will to dominate all life. — excerpt, The Lord of the Keys

The Lord of the Rings is famous for the intricate languages that Tolkien crafted to flesh out the world of Middle-earth. Now, thanks to some new keycaps from mechanical keyboard designer Matt3o, you can now outfit your keyboard with some incredible-looking custom Elvish and Dwarvish keycaps.

Matt3o has been working on the official Lord of the Rings-inspired designs for over a year, but he’s been dabbling in Elvish keycaps for years, going all the way back to his low-profile DSA Granite design in 2016 (which had an optional Tengwar set available).

But unlike Matt3o’s original release, though, the new Lord of the Rings keycaps are actually licensed by Middle-earth Enterprises (the company that owns the rights to key film and merchandise aspects of the The Hobbit and The Lord of the Rings novels). That means that along with full keyboards in both Tengwar (the Elvish script) and Dwarven runes, there’s also a plethora of novelty keys featuring key iconography from Middle-earth, including Eye of Sauron escape keys, One Ring-branded command keys, and more.

A key part of that is due to the extremely complex world of Tolkien licensing, which is split between several companies. It includes the Tolkien Estate, which owns the copyrights to the books, and New Line Cinema / Warner Bros., which made the iconic film adaptations and retains the rights to its visual recreation of Tolkien’s world.

That meant that Matt3o had to design iconography from scratch, instead of drawing on past interpretations. The actual translation work is fun, too — obviously, Elvish doesn’t quite have words for modern, technical commands leading to some interesting approximations. (“Print Screen,” for example, becomes “teitho parf” — or literally, “write a book.”)

The new sets come in “training” versions that feature both the created language key legends alongside traditional English characters, in addition to “hardcore” kits that are purely in Elvish or Dwarvish. The base set includes all the keys you need for a standard tenkeyless layout (meaning there are no numpad keys) for a preorder price of $100. And there are plenty of extra add-ons for larger or niche keyboard designs as well as optional accent color sets for those looking for a little extra visual flair.

Due to the complexity of the custom characters, the new keycaps are made from PBT plastic and have dye-sublimated legends, rather than using double-shot ABS. They’re designed in an MT3 profile and should fit standard Cherry MX switches and clones.

Unfortunately, Matt3o had to abandon their plans for a third set in the Black Speech (the dark language of Mordor spoken by orcs and used for the infamous inscription on the One Ring) — despite Tolkien’s fastidious work in his various created languages for the world of Middle-earth, there just simply wasn’t enough reference text to create a whole keyboard.

Preorders for the new keycap sets are available now, with shipping set to start on January 18th, 2022.

How do I know if egg freezing is for me?

This article is from The Checkup, MIT Technology Review's weekly biotech newsletter. To receive it in your inbox every Thursday, sign up here....
Read more