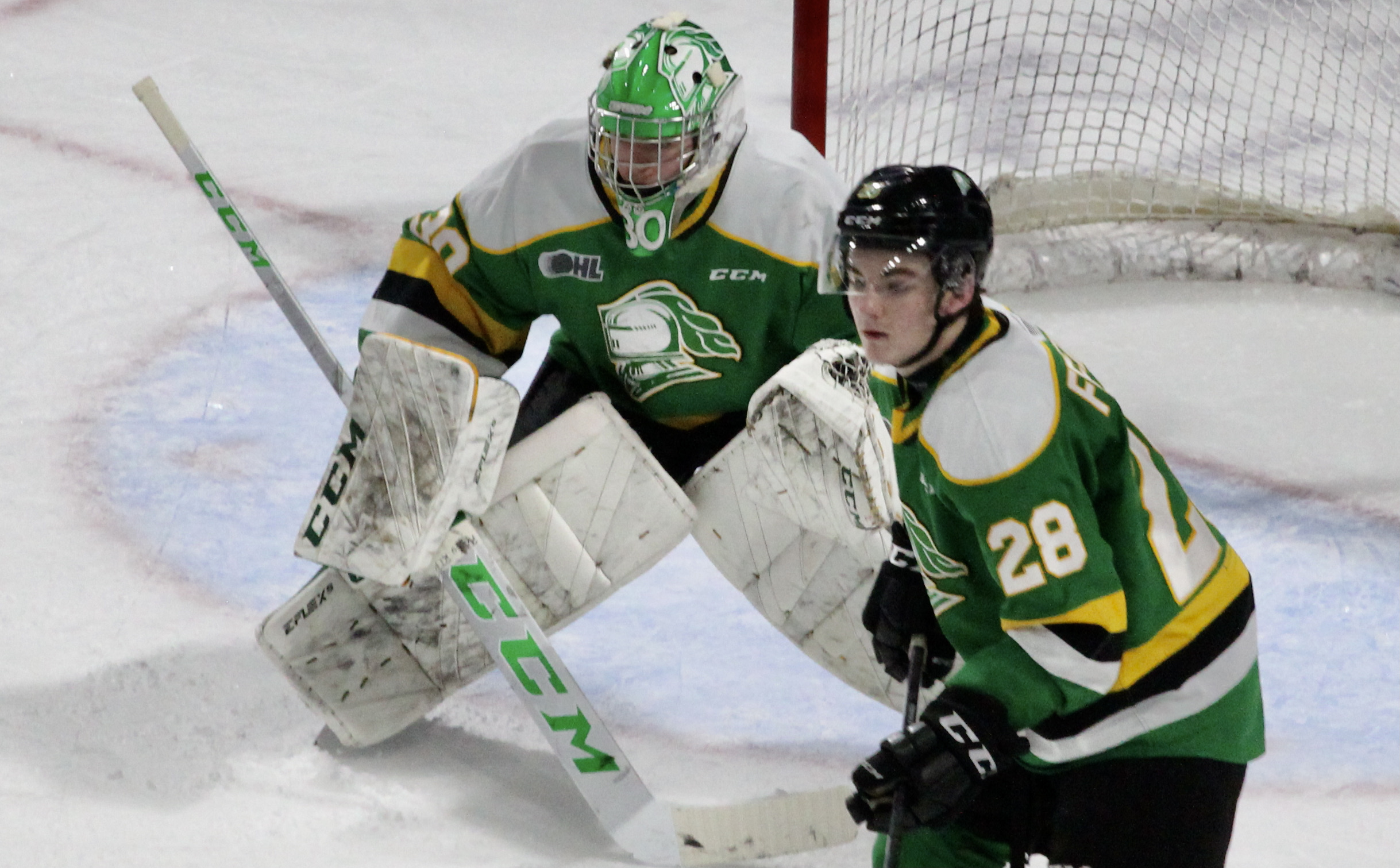 With a very young lineup on the ice in Sarnia, Ont., on Saturday night the odds of picking up a second consecutive pre-season victory over the Sting were stacked against the London Knights.

But the youngsters came through.

The teams traded goals to begin the first period as Florida Panthers prospect Sandis Vilmanis took a pass in the slot and ripped a shot past Owen Willmore into the London net.

The Knights tied the game on a power play as Denver Barkey found Abakar Kazbekov at the right side of the Sarnia net. Kazbekov put a puck right onto the stick of Ruslan Gazizov coming in on the left boards, then Gazizov scored.

A weird one put the Sting back in front in the final minute of the opening 20 minutes, as Tyson Doucette flipped the puck into the London end from outside the blue line. The puck bounced once and Willmore set his glove to catch it only to have the puck bounce a second time right in front of Willmore, hop over his glove into the net for a 2-1 Sting advantage.

Kaeden Johnston scored the only goal of the second period as he went one-on-one with Gaudreau at the edge of the crease. A steal in centre saw Kazbekov feed Ben Bujold, who found Johnston alone in front. Johnston waited, faked and beat Gaudreau with a high shot and the score sat 2-2 through two periods of play.

The Knights and Sting will not see each other again until Dec. 30. They will play six regular season games against each other.

Michael Levin put London ahead 3-2 in the third period thanks to a long feed from Carsen Lloyd and a shot to the top corner on Gaudreau, but Sarnia tied the game 3:30 later when Angus MacDonell scored on a power play.

That ended the scoring in regulation and led the way to the shootout. Overtime is bypassed in the pre-season.

Luke Evangelista has moved on from captaining the London Knights and netting 55 goals a year ago to his first season of professional hockey. The Oakville, Ont., native has one goal for this season.

“I want to play one game in the NHL,” says Evangelista.

The Nashville Predators selected Evangelista in the 2nd round of the 2020 NHL Entry Draft.

London Knights get back into game action with pre-season victory

The Knights will play pre-season games against the Erie Otters on Sept. 23 at Budweiser Gardens and on Sept. 24 in Clinton, Ont., and then they will get set for the start of their regular season on Oct. 7.

London will host Owen Sound for the second consecutive year. Sean McGurn scored the game winner as the Knights won 3-2 in a shootout in 2021. In the Hunter era last year and this year are the only times London and the Attack have met in the Knights’ first game.

London has played Windsor and Peterborough three times apiece on opening night dating back to 2000.

iPhone 14 charging slowly? How to fast charge your iPhone

Is your iPhone 14 or iPhone 14 Pro charging slower than your old phone did? The best way to fast charge is with a...
Read more

NASA scraps Artemis I launch due to potential hurricane threat

/ NASA still hasn’t decided whether to roll the rocket back to the Vehicle Assembly Building, a process that could delay its mission...
Read more