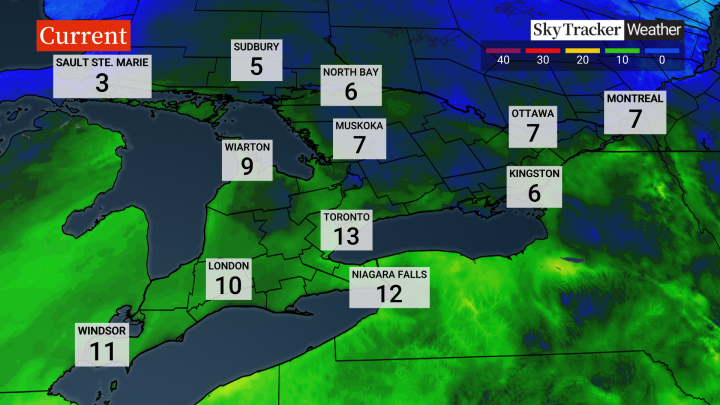 Localized flooding is possible in some areas of southern Ontario with heavy rain on the way beginning late Monday.

Environment Canada has issued rainfall warnings for areas stretching from Windsor to the Niagara Region, where rain is expected to be the heaviest.

Total amounts of 20 to 45 mm are possible in the areas under a warning, the weather agency said, before it tapers off from west to east Tuesday afternoon.

“I think areas along the northern shores of Lake Erie and into southern Niagara have the better chance of achieving those totals,” Global News meteorologist Ross Hull said.

“With the ground already quite saturated due to melting snow and rain over the holiday weekend, this could lead to some localized flooding, especially in low-lying areas.”

Environment Canada also warned of the possibility of localized flooding and advised residents to keep children and pets away from creeks and riverbanks.

The heaviest rain will stay south of the Greater Toronto Area, Hull said, though 10 to 20 mm is still possible beginning Tuesday morning, just in time for the commute.

“There could be some ponding on roadways with this latest round of wet weather, but at this point I’m not expecting a significant impact to the area,” he added.

“That being said, the ground is quite saturated after this weekend’s rain so make sure you keep catch basins clear and assure good drainage around your property.”

☔ RAINFALL WARNINGS have been issued from Windsor to Hamilton.
⚠️ Hazard:
Total rainfall amounts of 20 to 45 mm.
🕦 Timing:
Late tonight through Tuesday morning.
ℹ️ The frozen ground has a reduced ability to absorb this rainfall.
👉 https://t.co/JbrYw5AQZe#ONStorm pic.twitter.com/LdUuFgqSLX