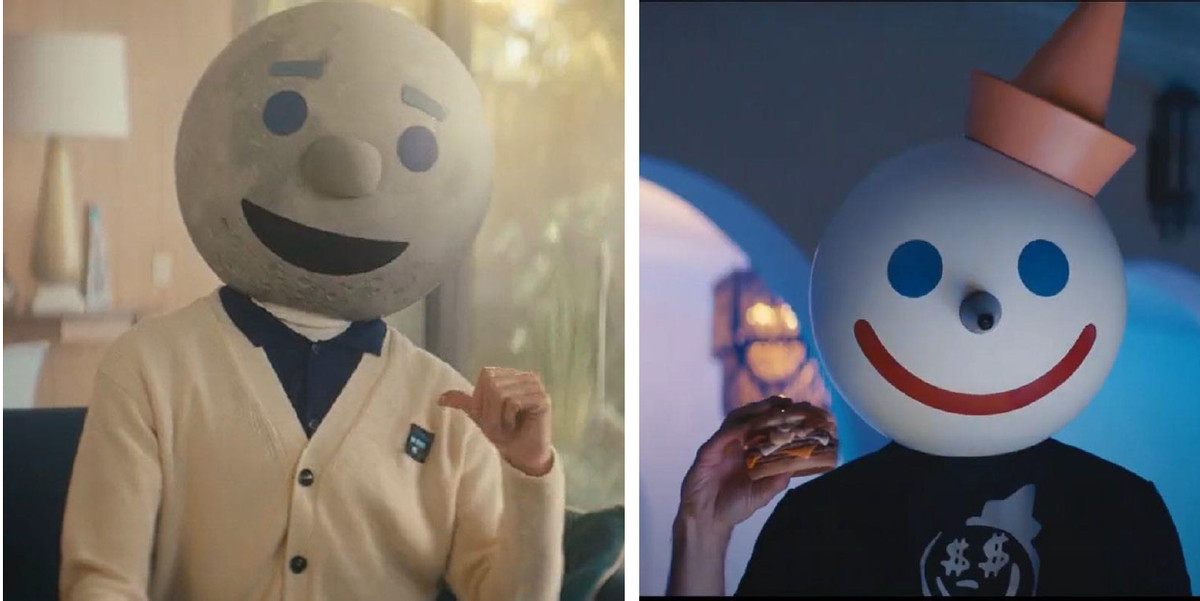 Restaurant chain Jack in the Box says it is suing cryptocurrency exchange FTX because it “brazenly and illegally copied or derived its ‘Moon Man’ mascot” from its established Jack mascot, and is doing damage to the Jack in the Box brand.

In a lawsuit filed in federal court in the Northern District of California this week, Jack in the Box claims that FTX’s Moon Man character, aka Lou Nar, “has a spherical white head also affixed to a talking human actor, with blue-dotted eyes, a nose, and a smile,” which is “strikingly similar to Jack. Both change their facial expressions and clothing throughout ads and appearances,” the suit maintains. Moon Man, however, is a “far inferior version” of Jack, the restaurant chain argues, and is “tarnishing Jack’s reputation to consumers, and/or blurring consumers’ association of FTX’s Moon Man with Jack.”

The company pointed to tweets about ads featuring Moon Man that were aired during a Major League Baseball game:

…viewers of that baseball game shared their reactions on Twitter as to who the “big head” might be, with one user posting a picture of Jack, stating that the Moon Man is the “Jack in the Box mascot.” Other members of the public have made statements such as “Oh look, it’s Walmart Jack in the Box!”, “Is it a dirty jack in the box thing?”, and “Jack in the Box’s drugged up cousin”, among others, which all demonstrate that viewers were associating the Moon Man with Jack. One Twitter user even tweeted a public post directly to FTX stating, “Hey, @FTX_Official, your mascot doesn’t look like the moon. He looks like Jack-In-The-Box with skin cancer.”

Jack in the Box served FTX with a cease-and-desist letter on October 15th, according to the lawsuit, notifying the crypto exchange that it was “infringing on JITB’s intellectual property and diluting its trademarks.”

In response, FTX said it would continue to use Moon Man in advertising, the lawsuit claims, saying that “Jack in the Box has only narrow protection limited to the behatted ping pong-headed clown who exploded out of a box to sell burgers.”

Jack in the Box says the Jack mascot was first released in 1951, and it’s gone through a few iterations since. At first Jack was a “clown-like spherical head that sat atop drive-thru boxes to ease customers into the then-novel concept of drive-thru restaurants,” according to the suit, then in 1970 it became more clown-like, with green hair and a large rainbow collar added. The company “reimagined” the mascot in 1995, into the current version: a “humorous no-nonsense businessman” who “appears like a typical adult human male, with the exception of his large, spherical white head, blue dot eyes, nose, and curvy smile.”

The suit was first reported by legal news site Law360. Neither Jack in the Box nor FTX replied to requests for comment from The Verge.

Jack in the Box says FTX has infringed on its copyright and diluted its trademark, and is seeking unspecified damages.