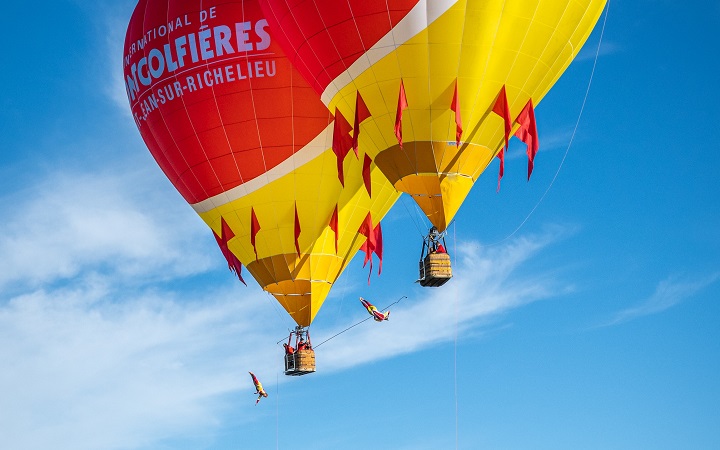 The windswept prairie east of the Rocky Mountains seems an unlikely spot for a hot-air balloon festival, but the town of High River, Alta., is celebrating the event’s 10th year.

More than 20 brightly coloured balloons — including a pink elephant, a black and yellow bee and the purple and yellow Eye of Ra, named after the Egyptian sun god — took advantage of a lull in the prevailing wind this week to get some up-in-the-air time to mark the opening of the Heritage Inn International Balloon Festival.

“We get about 50 per cent of our flights off. Weather impacts us everywhere,” said event director Jamie Kinghorn, who is also a town councillor.

“This is our 10th. We started in 2013 partly because of the flood that happened. I’d been to a number of balloon events and thought this might lift the spirits of the folks in town.”

The town of 12,000 just south of Calgary gained an international profile in 2013 when flooding in parts of southern Alberta caused billions of dollars in damage.

High River was one of the hardest-hit communities. Entire neighbourhoods were under water for weeks.

“I called in a bunch of friends from the balloon community and they knew what happened, so 20 of them came into High River and we put on a balloon festival that was actually amazing for the community,” Kinghorn said.

“That was sort of the first major thing toward recovery after the flood and we’ve been doing it every year since at the end of September.”

Kinghorn said the festival is a boon to local tourism and there’s not a hotel room to be had in town.

He had his first hot air balloon over the city of Calgary in 1988. A year later he was a balloon pilot.

There are 23 balloons participating this year, including some from the United States, Belgium and the United Kingdom.

“We tend to meet at various events. We tend to travel. We’re kind of like carnies to some extent,” he said with a laugh.

Alan Davidson, who has been involved in the sport since 1977, is one of the volunteers.

He said those who get involved tend to stick with it.

“The amazing thing is that there are still seven or eight of the people I was ballooning with in the ’70s and early ’80s who are still here at this event,” said Davidson. ‘They’ve been working with balloons for over 40 years.”

Kinghorn, who is the owner and pilot of the Eye of Ra, was the first balloon in the air Thursday morning after a Wednesday evening flight was cancelled due to the wind.

“My God am I glad we got this off,” he said as the flight came to an end.

The festival runs through Sunday.

It was a confrontational scene in Kitsilano Friday. Video submitted to Global News shows protesters and counter-protesters coming face-to-face at a “Story Telling with...
Read more

The best Black Friday Google deals you can still get

/ Much of Google’s device portfolio is on sale through Black Friday weekend, including the Pixel 7 phones, Pixel Watch, Pixel Buds Pro,...
Read more

/ Amazon’s excellent e-reader from last year is still on sale for to its lowest price yet at Amazon and other retailers.The latest...
Read more

At TDSB, app development can now literally happen on the fly

Atom Bank raises £30m as it pushes back IPO plans

UK fintech Atom Bank has raised an additional £30m from previous investors as it pushes its timeline back to 2024 or 2025 for an...
Read more

Most expensive drug approved to treat haemophilia, costing $3,500,000 a dose

The drug is a gene therapy to treat adults with haemophilia B (Picture: Reuters/Andrew Kelly/File Photo)The most expensive drug in the world has been...
Read more