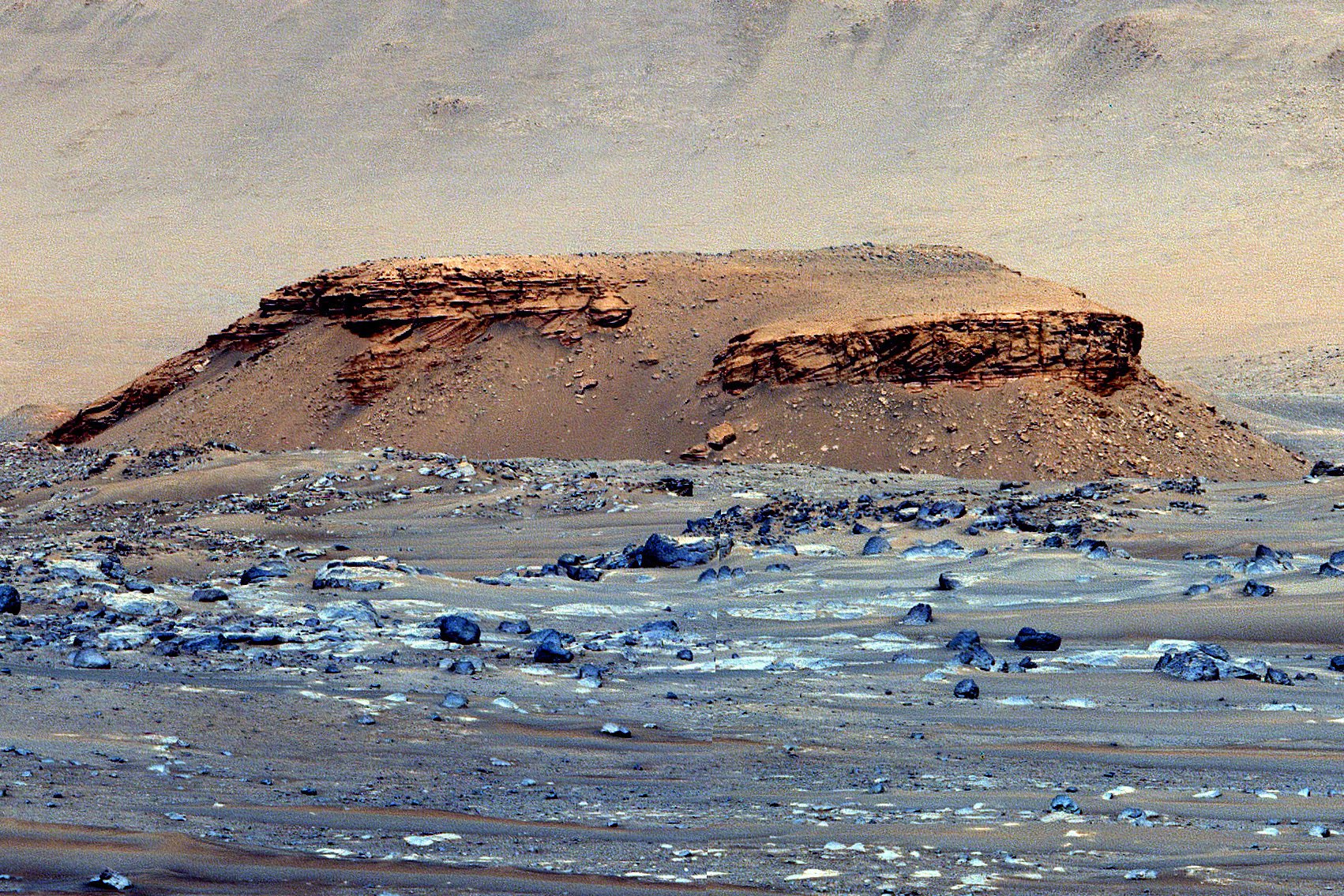 Images taken by Nasa’s Perseverance rover confirm Mars’ Jezero crater was once a quiet lake, fed steadily by a small river some 3.7 billion years ago.

The study shows how much water flowed into the crater – which today is a dry, wind-eroded depression – and indicates where the rover could search for signs of life.

The first scientific analysis of the images also reveals evidence that the crater endured flash floods.

This flooding was energetic enough to sweep up large boulders from tens of miles upstream and deposit them into the lakebed, where the massive rocks still lie today.

Researchers based their findings on images of the rocks inside the crater on its western side.

Satellites had previously shown that this outcrop – when seen from above – resembled river deltas on Earth, where layers of sediment are deposited in the shape of a fan as the river feeds into a lake.

Taken from inside the crater, the new images confirm this outcrop was indeed a river delta.

According to the study, the lake was calm for much of its existence, until a dramatic shift in climate triggered episodic flooding at or toward the end of the lake’s history.

He said: ‘If you look at these images, you’re basically staring at this epic desert landscape. It’s the most forlorn place you could ever visit.

‘There’s not a drop of water anywhere, and yet, here we have evidence of a very different past.

‘Something very profound happened in the planet’s history.’

Now that they have confirmed the crater was once a lake environment, scientists believe its sediments could hold traces of ancient aqueous life.

Perseverance will look for locations to collect and preserve sediments, and these samples will eventually be returned to Earth, where scientists can probe them for Martian life.

Team member Tanja Bosak, associate professor of geobiology at MIT, said: ‘We now have the opportunity to look for fossils.

‘It will take some time to get to the rocks that we really hope to sample for signs of life. So, it’s a marathon, with a lot of potential.’

Prof Weiss added: ‘The most surprising thing that’s come out of these images is the potential opportunity to catch the time when this crater transitioned from an Earth-like habitable environment, to this desolate landscape wasteland we see now.

‘These boulder beds may be records of this transition, and we haven’t seen this in other places on Mars.’

The Perseverance rover landed on the floor of Jezero crater in February this year, and has since been collecting samples, and sending back images.

The findings are published in the Science journal.

How do I know if egg freezing is for me?

This article is from The Checkup, MIT Technology Review's weekly biotech newsletter. To receive it in your inbox every Thursday, sign up here....
Read more