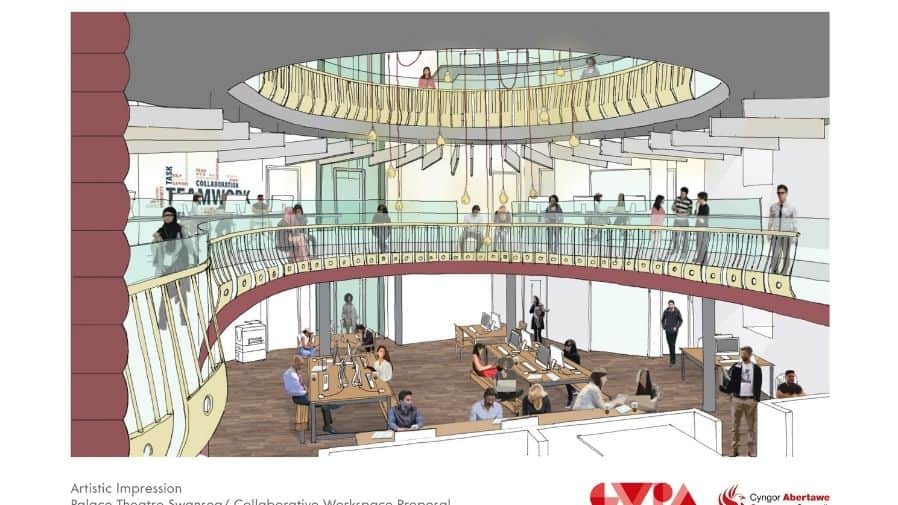 The most innovative digital workspace business in Wales is set to breathe renewed life into an iconic Swansea building. The 133-year-old, six storey Palace Theatre on High Street has been acquired by Swansea Council. Tramshed Tech, recently named Incubator/Accelerator of the Year at Fintech Wales Awards, has been chosen as lead tenant to run the Palace as a startup hub. Prior to being a nightclub for 15 years, the Palace Theatre staged icons to include Charlie Chaplin and Sir Anthony Hopkins.

Swansea city centre is undergoing a £1 billion regeneration and the currently derelict and dilapidated grade two listed building will play an important role in the city’s transformation.

Welsh startups to get the Palace boost

With Wales currently outperforming the rest of the UK in new business starts (up 31% on Q1 2020, 14% in UK), the plans to transform the building into a hub for tech, digital and creative start-ups and scale-ups will no doubt further enhance the startup scene in Wales.

R&M Williams have been appointed as the project’s main contractor having worked on a variety of heritage buildings, including £4m refurbishment projects at the grade two listed Penarth Pier Pavilion and the 1920s built Empire House in Cardiff.

Darryn Parry, Managing Director of R&M Williams Ltd, said: “R&M are delighted to be appointed as principal contractor to undertake the restoration of the iconic Palace Theatre building. “We look forward to working collaboratively with our client, designers and the local supply chain. The R&M project team will strive to deliver the Palace in line with the client’s expectations and will look to draw from our collective learning and experience of delivering similar schemes throughout South Wales, many of which have gone forward to receive acclaim and national recognition.”

Digital and tech scene in Swansea

In 2016, Tramshed Tech Directors Louise Harris and Mark John transformed Tramshed Tech in Grangetown, Cardiff from a derelict building in 2016 to an award-winning business incubator and accelerator in 2021. Tramshed Tech’s Cardiff site is now home to 50+ business and 600+ registered members to include Amplyfi – set to become Wales first unicorn and Wolfberry – named the UK’s most innovative Cyber Security company.

Tramshed Tech CEO Louise Harris said: “We are delighted to kickstart our partnership with R&M William and Swansea Council on this iconic project.

“We have seen exponential growth in our Cardiff site and for us, this marks a key stage in our support for the development of the digital and tech scene in Swansea. We are excited to restore this once-glorious building to its former glory as part of the city centre’s £1bn transformation, with tech and digital as key drivers for the city’s growth.”

Planning permission and listed building consent have been granted and GWP Architecture is leading the Palace project on behalf of the council. The building’s structure will be maintained with the retention and restoration of original historic features. Plans show a collaborative environment for start-ups and scale-ups to include workspaces for over 130 people.

Building could reopen by 2023

Robert Francis-Davies, the council’s cabinet member for investment, regeneration and tourism, said: “I’m delighted that a high-quality Welsh construction firm will be part of this prestigious project that will help regenerate the immediate area and the rest of the city centre.

“There’s still some way to go to bring this landmark building to life once more but the progress as we’ve worked with partners behind the scenes through the pandemic has been very encouraging.”

Canada’s 13 premiers say they “expect” to get a commitment from Ottawa to increase its share of health-care funding to 35 per cent, setting...
Read more

Cash-strapped EV startup Arrival is laying off half its workforce

/ The UK-based company named a new CEO while announcing a major bid to reduce costs and rightsize its business, as its struggles...
Read more

/ CEO Carl Pei says Nothing is making the US its No. 1 priority with its next smartphone, the Phone 2.Last year’s Nothing...
Read more