Home Tech News I came to the UK at 17, learned to code on mat...
Tech News

I came to the UK at 17, learned to code on mat leave and now I have an MBE 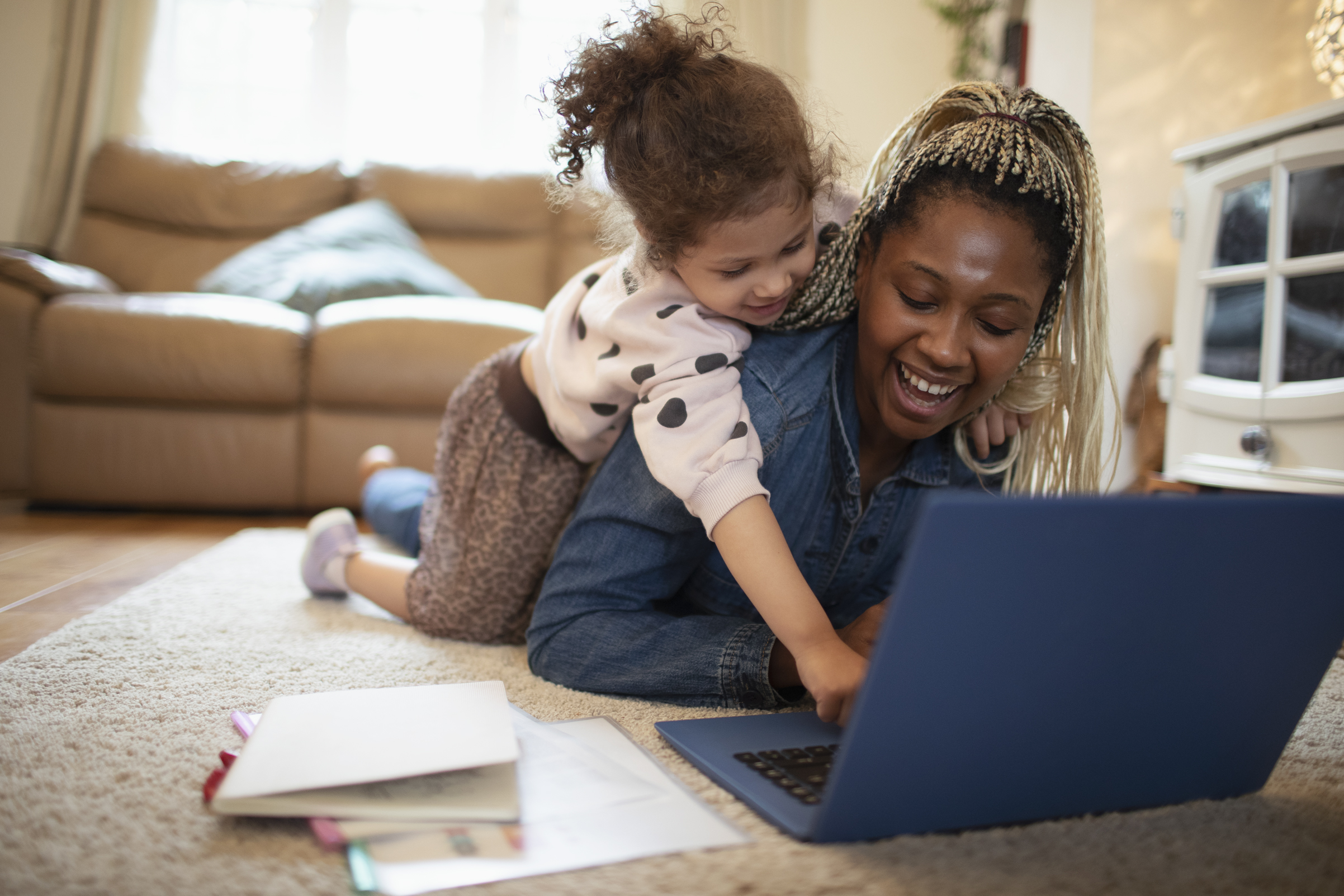 When I was five and living in a neighbourhood called Yaba in Nigeria, I broke my arm at a summer camp.

Through my tears, the teacher asked me where I lived, but I didn’t know my address – I only knew where my mum worked. It was a place called Domino Stores, which is one of the longest-standing supermarket chains in Nigeria.

I was at her work so often that everyone in the office and local supermarket knew me.  I believe this entrepreneurial spirit is what has shaped the rest of my life – including recently receiving an MBE for services to women in tech.

Growing up, I watched my grandparents, my mum and her siblings work hard to build their businesses and provide for us. They taught me a lot about discipline, learning and treating people fairly.

Nigerians are big on academia, so I came to the UK aged 17 to study for my A-Levels. I’m really proud to have both Nigerian and British heritage. My grandparents were Scottish and Nigerian and I feel very connected to both countries.

Staying with family made adapting to life in the UK easier, but the biggest change for me was the weather – it’s still something I’m trying to adapt to and I’m 37 years old now! I found a love of learning and spent a lot of that time reading books outside of my studies, because I was so curious.

Since those early days in the UK, I’ve become a mum-of-three (my children are nine, six and four). But after returning from my first maternity leave when I worked at Silicon Valley Bank, I had a lot of brain fog or ‘baby brain’ as some people call it. It wasn’t easy to slot back in to work and that left me feeling very low in confidence.

So, when I had my second child, I wanted to make sure that I had a better balance and felt confident in myself and my career. I had to have an emergency C-section during my second pregnancy and while recovering from the operation, as well as being on maternity leave, it gave me a lot of time to think.

I wanted to try my hand at building an app, so that I could have a better insight for the tech entrepreneurs I was working with as part of my job. So I decided to sign up for coding classes online while I was on my second maternity leave. I had to fit it around feeding my baby daughter, naps and looking after my toddler too.

It wasn’t easy, but it was so rewarding to learn something new each day. As the course went on, I started thinking it would be nice to learn in a classroom so I could speak to someone in-person for any questions.

At that time, there weren’t any classes I could take a baby to, so I had a wild idea to create a coding school for mums.

I remember wondering if there would be anyone who might be interested in taking a class with me, so I set up a Mailchimp list and posted the link on a few groups on Facebook and on Twitter. Within two weeks, I had about 100 people requesting further information about the course.

I had never stepped out of my comfort zone before, but I just thought, why not now? I thought about what time of day would be convenient for the mums, how long would work for the babies, and who would look after them. I had the idea in May and gave myself four months to test out whether it had any legs.

After receiving so much interest in the course, I started to map out what it could look like. I looked at the courses that I would have loved to attend and designed a bite-sized version that could work for busy mums like me who wanted to understand technology more.

I started to reach out to founders of existing coding schools to ask if they would mentor me. I found their details on LinkedIn and sent a message. I was so surprised when they responded and offered to guide me with designing the curriculum.

I would turn up with my baby and a laptop and sit with them and take lots of notes. It really showed me how generous the tech community was. Once the curriculum was designed, the next step was to find a venue and childcare for the babies.

One day in August 2015, I sent Marks & Spencer a tweet asking if they could help provide a meeting room for free. The next thing I know, the head of engineering was lending their team once a week for three hours to teach 15 mums how to code. That’s how Mums in Tech was born.

The mums were from very different backgrounds – we had teachers, lawyers, bankers, fire fighters, stay-at-home mums and women starting businesses that wanted to understand how to take it online or build an app themselves.

The progress each person made was so incredible to watch. These were women who had never coded before and at the end of the eight weeks could build a website.

There are so many lovely success stories. One mum in particular had just been made redundant and didn’t know what she was going to do next.

On the third week of the course, I had arranged a field trip to a coding bootcamp so that they could understand the steps to become a software engineer. Before the trip ended, she’d signed up to the bootcamp.

The pilot course ran from September to November 2015. As the end of the pilot approached, I started to get enquiries about the next one. I had never thought about a next one at that point. I was due to return to work the following March.

I thought about it a lot and decided it was something I needed to see through. I thought of all the other women who didn’t have the option to learn a new skill in person and with an incredible community around them because there was no childcare.

I ran Mums in Tech for three years, partnering with companies such as Microsoft, the Ministry of Justice, Wayra, Capco, Three and many more. It was a very lean company, running with the help of a team of mums who volunteered their time, many of them alumni wanting to give back after experiencing the course themselves.

In the summer of last year,  I got an email saying I had been awarded an MBE for services to women in technology. Six years after starting Mums in Tech, I had never expected any kind of recognition, it was a total shock.

My goal was all about giving women a safe place – one where they didn’t have to choose between being a mum and wanting to learn about technology. I hoped it would spark something in them and give them the confidence to return to work knowing they had given themselves a gift and should be so proud of themselves.

I’ve seen first-hand how life-changing learning something new can be. Some of the mums have gone on to build businesses, become developers, join tech companies and inspired others.

Even learning something small – like how to code – gives you a boost in confidence. It’s like a muscle. The more you learn, the more you retain.

Starting Mums in Tech taught me so much about myself too. I learned how resourceful I am, but that it is also OK to ask for help.

In my own career, I’ve had several other fresh starts in areas I’ve had no experience – from banking and working with tech start-ups, to writing. Three years ago, I had another opportunity to start from scratch and teach myself how to be an investor.

So I know how daunting it can feel to start from scratch in a new career, just as in a new country – and even the challenges of starting out as a parent.

I’m proud of having juggled a new career alongside motherhood, as well as having that drive to learn, which was instilled by my family and Nigerian background.  It has equipped me to go for it, even when I have doubted myself.

I’m so happy I made each of these leaps, and I’ve never regretted learning something new.

I want others to know that where you start doesn’t need to be where you finish.  That’s why I’m also now supporting the Government’s Skills for Life campaign, which is all about helping people to get to where they want to be.

Switching careers is all about humility, curiosity and having the courage to try something new. The confidence boost you get from achieving something you thought previously impossible, is like nothing else – it’s infectious.

Discover hundreds of opportunities to learn new skills and get free careers advice from Skills for Life on their website here.

Immigration Nation is a series that aims to destigmatise the word ‘immigrant’ and explore the powerful first-person stories of people who’ve arrived in the UK – and called it home. If you have a story you’d like to share, email james.besanvalle@metro.co.uk


MORE : Racism drove me out of my country of birth – the UK became my safe haven


MORE : I organised Nigeria’s first ever Pride event – then had to flee for my safety


MORE : I received an MBE for my work during Covid – but as a refugee I still feel unwelcome