Home Tech News How big is Zaporizhzhia nuclear plant and could it be another Chernobyl?
Tech News

How big is Zaporizhzhia nuclear plant and could it be another Chernobyl? 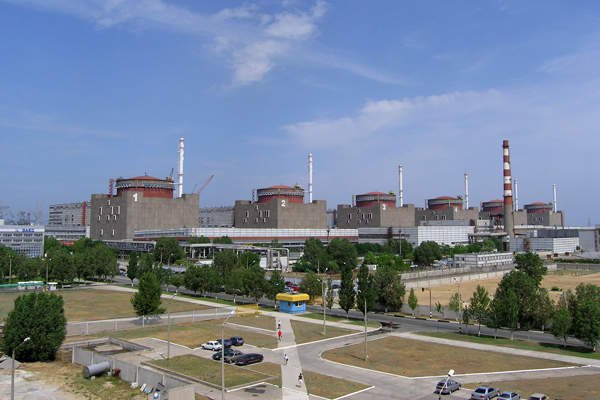 You’ve probably never heard of the Zaporizhzhia nuclear power plant before, but it’s a giant.

Located in south-east Ukraine, it’s the largest nuclear power station in all of Europe and normally produces 20 per cent of the country’s electricity supply all by itself.

Now, following an onslaught by Russian forces, the power station is under Vladimir Putin’s control.

In normal times, the Zaporizhzhia plant would be using its six reactors to pump out enough energy to power four million homes.

Early on Friday morning, the State Inspectorate for Nuclear Regulation said the plant is now occupied by the military forces of the Russian Federation.

A statement on social media said that station staff continue to work and monitor the state of the power units to ‘ensure their safe operation’.

How big is the Zaporizhzhia nuclear power plant?

The plant has been operational since 1984 and sits on a 104.7 hectare site (0.5 square-mile) on the banks of the Kakhovka reservoir.

Each of the plant’s six reactors is capable of generating a gross electrical capacity of 1,000-Megawatts each.

For comparison, an average nuclar plant in the United States, sitting on a one-square-mile site, would generate 1,000-Megawatts in its entirety.

Warter from the Kakhovka reservoir is crucial for the cooling and the operation of the plant.

Any spent nuclear fuel from the reactors is stored in cooling pools for four to five years until the residual energy and radioactivity decrease.

How does the Zaporizhzhia plant compare to Chernobyl?

Compared to Zaporizhzhia, the more famous Chernobyl power plant is much smaller.

Chernobyl only had four reactors and was capable of producing about 10% of Ukraine’s electricity needs at the time.

However, more reactors were scheduled to be built before the disaster on April 26, 1986.

Crucially, the two plants use different types of reactor design.

The resulting steam would drive the reactors’ turbines and generate electricity.

For safety reasons, the VVER-1000 reactors are encased in a confinement shell capable of being hit by an aircraft weighing up to 20 tonnes without suffering any expected damage.

Is there a radiation threat from the Zaporizhzhia nuclear power plant?

The Zaporizhzhia nuclear power plant – whether controlled by the Russians or the Ukrainians – has multiple safety precautions in place.

According to the International Atomic Energy Agency, the effects of the Russian attack have not affected essential equipment or caused radiation levels to change at this point.

US officials also said there was no indication of elevated radiation levels at the plant.

What would happen if the Zaporizhzhia nuclear power plant explodes?

If an explosion were to occur – the results would be catastrophic.

Ukrainian politicians have said there is a ‘real threat of nuclear danger’, with foreign minister Dmytro Kuleba warning: ‘If it blows up, it will be 10 times larger than Chernobyl.’

The plant is significantly bigger than Chernobyl and the resulting blast would kill thousands in the surrounding area.

Depending on weather conditions, radiation could well be carried further into Europe, even as far as London.

But, to be clear, the chances of that are unlikely given that the PWR design is much safer than what was in place in Chernobyl.

What happened at the Chernobyl power plant?

In April 1986, reactor four at the Chernobyl Nuclear Power Plant, which was located close to the town of Pripyat in the Ukraine, exploded during a safety test.

The safety test was designed to simulate a power-failure at the station, therefore emergency safety systems were purposefully turned off.

After the explosion, a fire raged and was not contained until 4 May, and all the while the dangerous nuclear fallout permeated the air and traveled through the atmosphere to parts of western Europe and the USSR.

Today, it’s known as the worst nuclear disaster in history, with, as of a 2005 report, 56 deaths attributed to either the explosion or the radiation.

Of those deaths, 47 were emergency service workers, and nine were children who died of thyroid cancer.

The same IAEA report claimed that 4,000 more could still die as time goes by due to diseases like cancer as a result of the fallout, however some claim that the number of deaths could actually grow to be much higher.

Up until the Russian invasion, tourists could visit Chernobyl and the nearby Pripyat, which remains abandoned to this day, as long as they had a tour guide and followed the proper authorisation procedures.

Certain areas, like the basement area of the hospital where the clothing and tools of the emergency responders were left, are still off-limits due to the fears of lingering radiation.