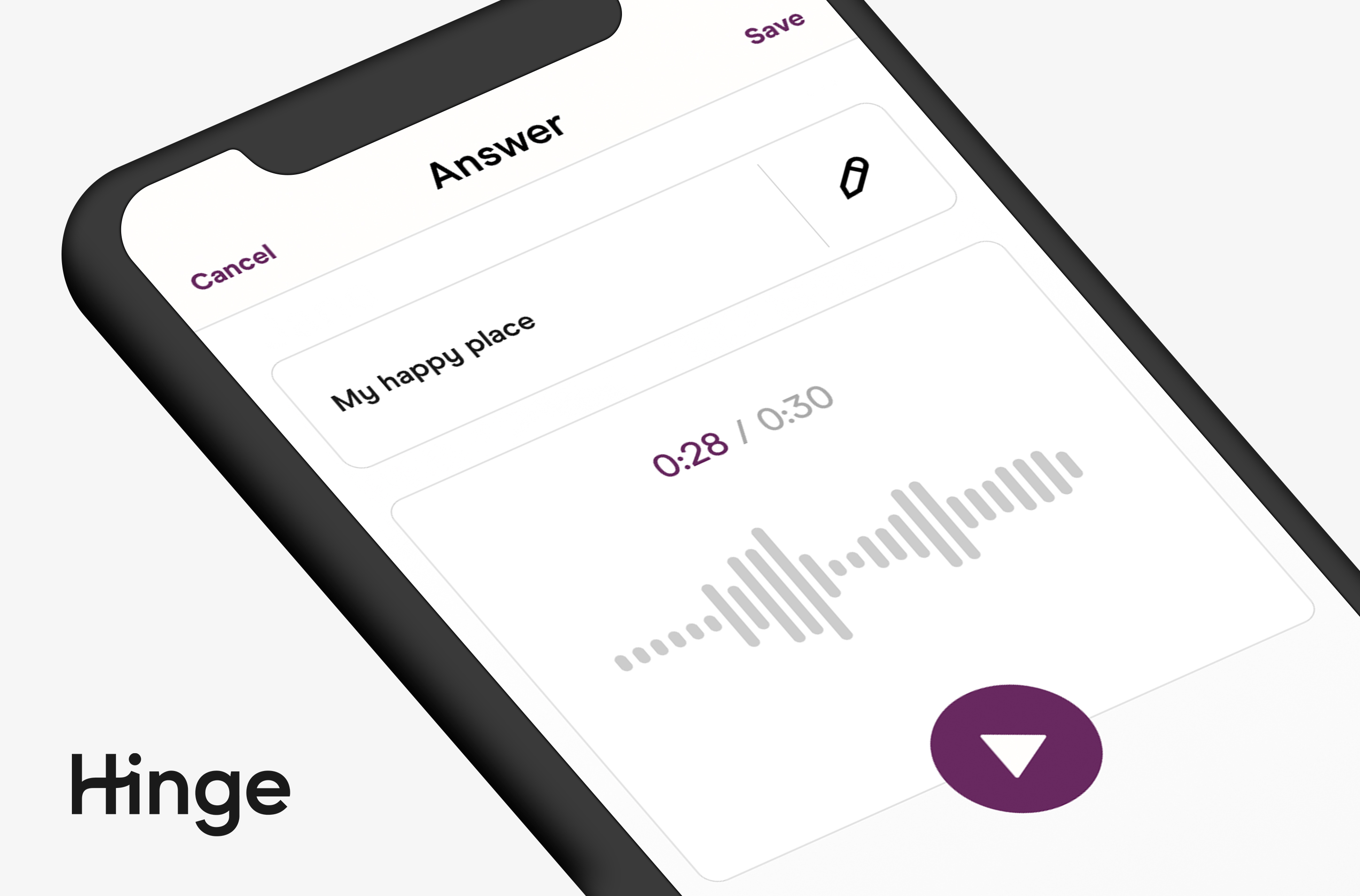 Do you believe in love at first listen? Dating app Hinge definitely hopes so.

The dating app has released a new ‘voice prompt’ feature which allows people to answer prompts on your profile with a 30-second audio recording.

Additionally, Hinge has also added voice notes to its in-app messaging feature so people can send an audio message whilst chatting with their matches.

‘Oh, this is a bad idea,’ was Michala Zappitelli’s first reaction to it. ‘The feature was a bit odd for a dating app because when I use voice notes, it’s to my closest friends and only when it’s inconvenient to text,’ she said.

64% of Hinge users said that a potential match’s voice was an important factor in determining if they liked them, whether it’s giving them ‘the ick’ or butterflies.

‘I definitely think it’s affected whether I swipe right or left on a profile. I can’t believe people would record something like that and post it to their profile, and it changes my initial opinion of them,’ said 23-year-old Zappitelli.

Some find the voice prompts on people’s profiles ‘cringey’ and ‘performative’.

‘Sitting down and recording yourself speaking feels embarrassing to me and it’s definitely caused me to swipe left on people I might not have otherwise,’ said Charlotte Hancock, 24.

There’s also the added factor that many of us don’t like hearing recordings of our own voices. Experts say that’s because we don’t get to hear our voices exactly how they sound to other people. This decreases the probability of someone posting a voice note on a dating app.

‘I have not used it because I personally think it’s awkward to record a voice note to a prompt for hundreds of random men/women to hear,’ added Zappitelli.

Despite the initial scepticism, some users seem to have taken to the new feature, using it to bring out their personalities better.

‘I have a peculiar sense of humour and think that the voice prompts can easily show that,’ said Coco Noel, 39.

The prompt she used: ‘You should *not* go out with me if…We’re related…ha ha ha…unless we’re step-siblings’

‘I haven’t come across many people who have used it yet but one guy’s voice prompt was the deciding factor in how I swiped,’ added Noel.

Would a voice note on someone’s profile on a dating app increase someone’s chances of getting a match? It seems that would depend on the content of the voice note.

According to dating and relationship expert Callisto Adams, ‘something friendly or funny can help in increasing someone’s attraction and trust’. Adams believes that not many people would use this feature.

‘That won’t entirely stop us from trying to record a more ‘appealing’ or ‘sexy’ voice note,’ she added.

Voice is a proven factor in the initiation and establishment of romantic connections. However, it’s doubtful whether that would translate to hearing it over an electronic device.

‘It can make a voice sound more appealing than the real deal or it can ruin the real beauty[of a voice],’ said Adams.

Other experts don’t think that voice prompts not be effective in increasing matches.

‘People swipe the apps so mindlessly, barely engaging with profiles very long. Stopping to play and listen to a recording adds a level of interaction I can’t see most of today’s daters adopting,’ said psychotherapist Jack Worthy.

However, he thinks that sending voice notes back and forth once you’ve matched should prove to be very popular.

‘People hate the tedium of the texting phase on dating apps but also want to carefully screen who they’ll meet in real life. Voice notes should make this more efficient, lively and human,’ said Worthy.

Experts agree that attraction can begin with a voice. It can also enhance or diminish by a voice so Hinge might be on to something.

Dating apps are beginning to make their user experience more 3-dimensional. Badoo recently launched their ‘Clips’ feature that people can use to record 15-second videos in response to a number of fun, pre-selected questions.

Hinge’s chief product officer, Michelle Parsons said that this feature was part of their efforts to help people get to know someone as soon as they see their profile. ‘Our team’s focus is to introduce product updates that help our daters move from the selfie to new forms of self-expression,’ she said.

There’s a lot that’s communicated through our voice—charisma, sincerity, confidence, empathy and humour. Even voice recordings can convey qualities of the other’s personality that can make you feel attracted, bored or repulsed.

While most users might hold back on using these new features, it will certainly change how we navigate the online dating landscape.

Rush Hour Crush – love (well, lust) is all around us

Tell us about your Rush Hour Crush by submitting them here, and you could see your message published on the site.