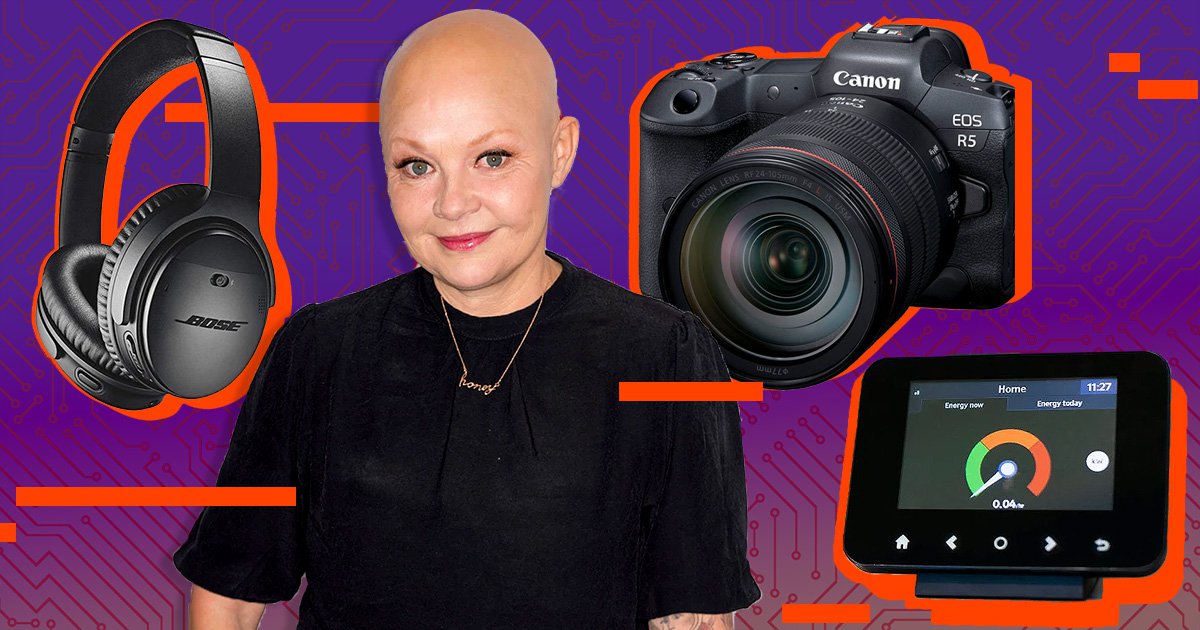 As a well-known TV presenter, you’d think Gail Porter would be comfortable in front of the camera.

But when it comes to drones she’s not so sure.

We chatted to the presenter, 50, about tech fails on live TV and why drones are ‘creepy’.

Is there any tech you’d un-invent?

E-scooters. They run riot near me in London, jumping between the pavement and the road, and driving up behind me in the evening. They’re terrifying and dangerous.

I also don’t like seeing drones in my street. Drones can be fun, and they’re great for films and TV, but it’s creepy and Big Brother-ish because you don’t know who’s watching you or what’s happening.

What’s been your most disappointing tech purchase?

I love my Bose QuietComfort 35 IIs. They’re noise-cancelling and they’re massive old-school ones. I forgot them once when I was going up to Scotland. It’s a long train journey so I thought I’d buy something different.

I grabbed AirPods from the Apple store and they were so uncomfortable, I had to take them out. I’ve got funnyshaped ears and they kept falling out.

It’s probably not a tech fault, it’s a my-head-shape-fault, but anything you stick into your ears, that’s a tech no from me.

If money was no object, what tech would you buy?

I’d love a new camera. I did photography at college and I’ve got my eye on the Canon EOS R5. It’s perfect for stills.

It’s got great lenses and it’s a beautiful piece of machinery. I look at it every time I’m in the shop but it’s expensive — about £4,900 for the body, then it’s the lenses on top.

I’d also get an e-bike. I’ve got an old-fashioned bike with a basket on the front, and it takes me forever to cycle.

An e-bike would be good if I was having a lazy day and wanted to do some exercise without working as hard as I do on my little push bike.

What tech would you invent?

A disco mask with flashing lights. I love silent discos so the mask would have headphones attached. There’d be protection, dancing and lighting up the sky at night.

Have you ever had a tech fail on TV?

I did a live ITV programme called the Totally Interactive Game Show. Kids phoned in and we’d play a game for them on a computer, and it would just freeze.

The kids would be going: ‘Go right! Go left!’ and I couldn’t because it was frozen. The kid would get upset and I’d go, ‘Let’s give you a prize anyway!’ I would be giving everything away and the producer would be going, ‘Stop giving away prizes!’ It must have cost them a fortune.

What’s the most useful gadget in your house?

I’ve just got a Smart Meter and it tells me how much gas and electricity I’m using. Before, I’d be floating around the house, using stuff willy-nilly, then getting the bill and having no idea how it came to that.

Now I know exactly how much I’m using and when. It’s good for budgeting because I know what I’m spending. I keep it on top of the microwave and I’m obsessed. I’m like, ‘Ooh, check me out — I’ve been quite sustainable today.’

What tech might people be surprised to hear you’re a fan of?

I’m a massive fan of robots. Everything in my house talks. I’ve got Star Wars things that move and things that interact with each other.

I love electric skateboards too. I want one but that would be terrible because I’ve got no sense of balance. When I told my daughter I wanted one, she just laughed. That said it all.

Gail Porter is an ambassador for the government’s Smart Energy GB campaign. To learn more about this and how smart energy meters help, visit smartenergygb.org


MORE : Nintendo files patent for new 4K upscaling tech – are they being honest about devkits?