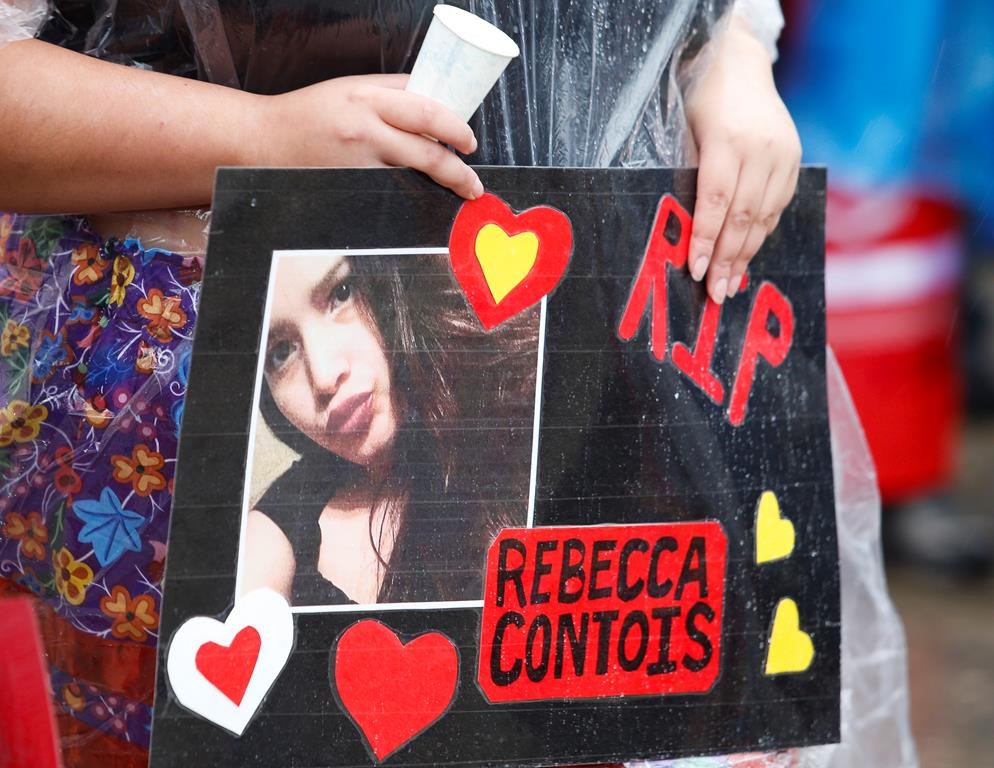 Families of two Indigenous women allegedly killed at the hands of an accused serial killer are calling on police to do more to find their missing loved ones.

On Thursday, Winnipeg police charged Jeremy Skibicki, 35, with first-degree murder in the deaths of Morgan Harris, 39, Marcedes Myran, 26, and an unidentified woman.

Their bodies have not been found.

Skibicki was already in custody after he was charged May 18 with first-degree murder in the death of Rebecca Contois, 24. Contois’ partial remains were found in a garbage bin near an apartment building and police later found the rest of her remains at the Brady Road landfill in Winnipeg.

On Friday, Winnipeg’s police chief, Danny Smyth, said while investigators believe the remains of the other three victims are at the same landfill, it is not feasible to search because too much time has passed since the women were killed.


That doesn’t sit well with the grieving families of Harris and Myran, who only learned the women are now part of a homicide investigation Thursday.

“How do you bury somebody you don’t have?” asked Myran’s grandmother, Donna Bartlett, in an interview with Global News Friday.

“I would like the police to search more in the landfill, to try and find the body parts, for all the women that are there.

“At least bring part of them home.”

“Those women had families, they were mothers, they were cousins, sisters, and they didn’t deserve that,” the 21-year-old told reporters.

Jeremy Skibicki to plead not guilty on all charges in 1st-degree murder case: lawyer

“I think that they should be searching because my mother deserves to come home.

“We deserve to have her remains and so do the other families.”

Friends and family are remembering Harris — a mother of five and a grandmother to one — as someone who was fun, fearless, and well-liked.

“I know that she loved her children and she did the best she could with what she had. I think about just how unfair that it ended like this,” Kirstin Witwicki, Harris’ cousin, said during the vigil Thursday.

“She had the soul of a UFC fighter. She was fearless and scared of no one,” she said of Harris, who lived in Winnipeg but was a member of Long Plain First Nation.

Police have previously reported Harris was last seen on May 1. They said this week she was likely killed around that same time.

“She was a great person. And I want her to be remembered as how she was when she was younger and not how she was and she went missing,” Cambria said after the vigil.

“I want her to be remembered as happy go-lucky as she was. She was silly. She was fun. People loved to be around her.

“When we were searching for her, there was a single person that did not know who she was and no one had a bad thing to say. Everyone is saddened by the loss.”

The pain is still raw for Bartlett, who helped raise Myran in Winnipeg, and, like Harris’ family ,has been searching the city since her granddaughter went missing.

Now she is helping family to care for Myran’s two children, aged seven and eight.

“She was a very, very sweet girl. She was always happy, big smile,” Bartlett said of her granddaughter, who lived in Winnipeg but was also a member of Long Plain First Nation.

Myran’s mother, Pamela Myran, said her daughter, the middle of three children, had an independent spirit.

Like others in the family, Pamela told Global News her daughter was caring, playful, and protective of those she loved.

0:27
Mother of victim in alleged serial homicide holding out for hope


“She was a happy girl, she always had a smile. Even if she was sad or mad. She would be smiling,” she said.

Pamela said it hurts to know police aren’t planning a further search of the landfill.

“How are you supposed to close if you can’t find her? She could be still alive – that’s my hope.”

In a statement sent to media Friday, following Skibicki’s first court appearance since the new charges were filed, family of Contois said they are deep in sorrow.

Contois lived in Winnipeg and was a member of the O-Chi-Chak-Ko-Sipi First Nation, also known as Crane River.

Family has previously said Contois, who left behind a daughter, was active in the community with various Indigenous street-watch programs, helping find Missing and Murdered Indigenous Women and Girls.

In Friday’s statement, a spokesperson for the Contois family said the last few months have been “incredibly exhausting.”

“We have experienced paralyzing grief. Pure devastation,” a statement said.

“I don’t think we have ever cried buckets of tears, painful wake-you-up-in-the-middle-of-the-night-anxiety, a type of grief never experienced before, deep, deep sadness.

“We also continue to think of the other families. Our deepest condolences to them.”

Skibicki did not enter a plea Friday, but his lawyer said he maintains his innocence.

— with files from Global’s Rosanna Hempel and The Canadian Press

1:53
Jeremy Skibicki to plead not guilty on all charges in 1st-degree murder case: lawyer