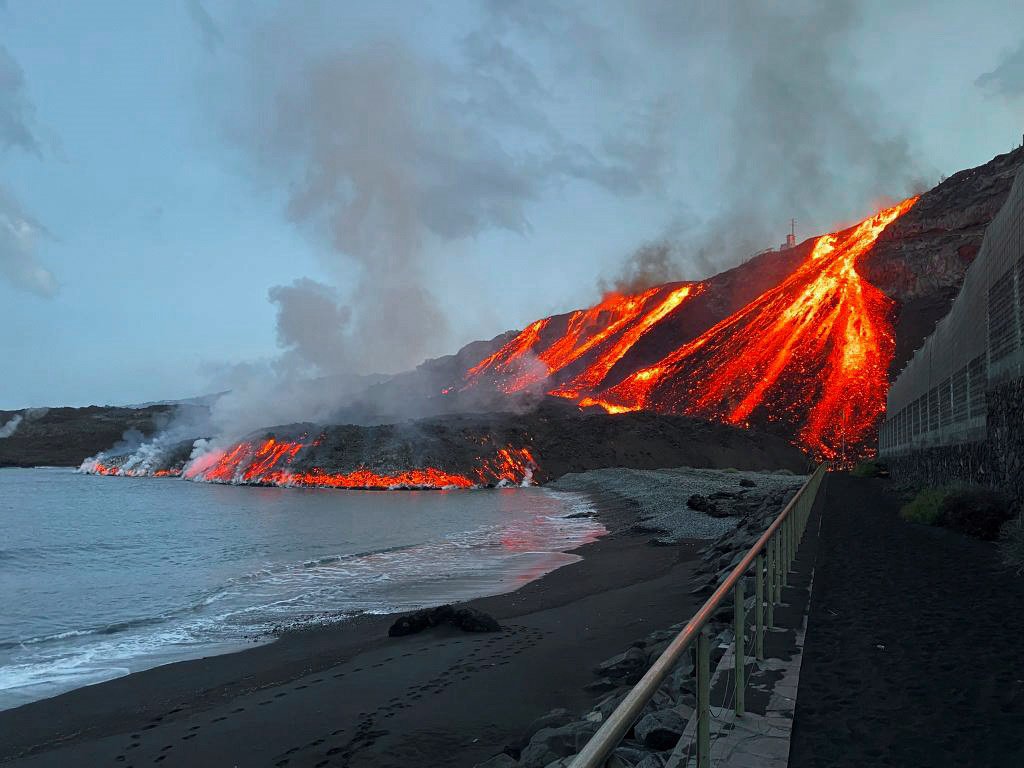 The ongoing volcanic eruption in the Canary Islands is continuing to spew lava and noxious gas eight weeks after it first started.

These pictures show the damage caused by the Cumbre Vieja volcano on the island of La Palma. It’s been erupting continuously since September 19.

Since that time, 985 hectares of land have been destroyed by the lava.

Many homes and roads have been obliterated and people have had to be evacuated to safety.

In total 1,452 buildings have been destroyed by the eruption. 1,177 were residential properties.

As a result, the Spanish government has pledged 225 million euros (£192 million) in aid to help residents of the island.

Pedro Sanchez, Spain’s prime minister, said financial assistance for housing would be tax-exempt and that taxes on air travel to and from the island, part of the Canaries archipelo off northwest Africa, would be subsidised for a year.

But in Los Llanos de Aridane, the closest town to the lava flow, some expressed frustration that they had yet to receive any of the promised cash.

‘I want to believe (the aid is coming) but time is passing by and we see nothing,’ said Oscar San Luis outside the local notary’s office, where he was waiting to file paperwork to apply for compensation.

‘I remain hopeful. If you don’t have hope what are you doing with your life?’ the 57-year old, who lost several holiday properties and his avocado plantation to the eruption, told Reuters.

The Canarian regional government said it had hired 30 people to verify claims lodged in a register for compensation.

Speaking shortly after Sanchez’s address, Carlos Cordero Gonzalez, who runs a clothes shop in Los Llanos, said it was time for action as well as words.

‘Now (the Prime Minister) just needs to say that the money is going to be sent directly to businesses and residents… I hope next week we have the funds in our accounts.’

Aside from the lava, the ash in the air is toxic and has jagged edges that can cause irritation to the eyes, nose and lungs, making it difficult to breathe.

Despite the risks, volunteers have been working tirelessly to clear roads and uncover buildings. The Spanish Navy has been brought in to help.


MORE : Fountains of lava explode into the sky as La Palma volcano collapses