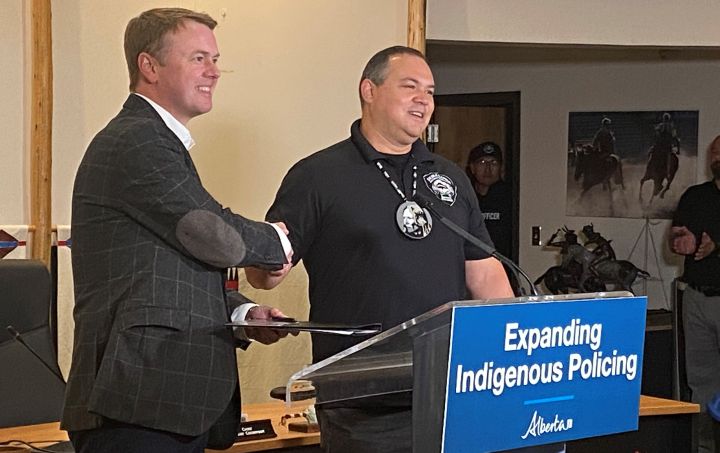 The Siksika Nation will be taking over policing responsibilities from the Alberta RCMP, the United Conservative government announced on Friday.

According to a news release, the First Nation reached a deal with the Alberta and federal governments allowing it to create its own police force.

This comes after Siksika Nation called on Ottawa to eliminate roadblocks preventing the creation of a new Indigenous police force in July.

Siksika Nation wants go ahead from Ottawa on police force

The Siksika Nation, located 130 kilometres east of Calgary, had its own police force from 1992 to 2002, but the 10-year agreement with the federal and provincial governments that established the organization wasn’t renewed due to a lack of funding.

Efforts to re-establish the police service have been on hold for the past couple of years as the federal government completes a review of its First Nations and Inuit Policing Program.

The nation then signed a memorandum of understanding with the Alberta government in July to work toward establishing a police force in Siksika.

This is Canada’s first self-administered First Nation police service in 14 years, the Alberta government said. Siksika Nation is also looking to develop a prosecutor’s office, which the nation said would be the first of its kind in Canada.

“The recent tragic events in Saskatchewan have underscored the importance of First Nations policing. Every individual has the inherent right to safety and security, and establishing a Siksika-administered police force will help secure this right,” said Siksika Nation Chief Ouray Crowfoot in a Friday statement.

“Siksika police and prosecutor services are foundational building blocks for a safe Siksika. It’s these kinds of partnerships that make me proud to represent Siksika and call myself an Albertan and a Canadian.”

The Alberta government said it will work together with Siksika Nation to demand a clear operational timeline and negotiate a transition agreement with the Government of Canada.

— with files from Bill Graveland, The Canadian Press.