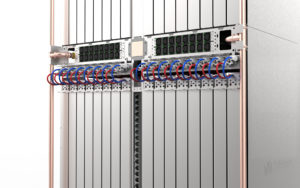 OVHcloud has recently introduced a new hybrid liquid cooling approach to cooling its data centres, which aims to reduce costs for businesses, manage their data responsibly, and help them reduce their carbon footprint.

The global data centre cooling market is projected to double in the next five years, and there is a growing demand by companies for cooling technology to better manage data, the company said.

Advancements and emerging technology, such as liquid cooling, are compelling organizations to re-evaluate data centre designs. Liquid cooling technology can help them save money in the long run. Additionally, the technology aims to be sustainable, addressing climate change and reducing energy consumption of a server by at least 20 per cent compared to air cooled units.

Typically data centres use fans to circulate air for cooling, however liquid cooling uses water or other forms of dielectric liquids such as transformer oil, perfluoroalkanes, or purified water to absorb and remove heat. In comparison to air, water is much better at conducting heat away.

Immersion cooling is a thermal management technique in which electronic devices and IT components, or even complete servers and storage devices, are submerged in a thermally conductive but electrically insulating dielectric liquid or coolant.

The fluid in the tank cools all IT equipment in the server, rather than just central processing units (CPUs) and graphics processing units (GPUs). That fluid essentially replaces the air that would have been circulating in OVHcloud racks, enhancing the efficiency of any component not cooled by OVHcloud water cooling systems.

According to Miroslaw Klaba, research and development director at OVHcloud, the hybrid liquid cooling approach comes with many benefits, one of which, he said, is, “We were able to remove the fan systems that we had inside the racks themselves. We try to lower the usage of what we don’t need. So the fans themselves are not needed there. This is lowering the cost but also the power…as the price of the power, mostly in Europe, is rising.”

The new “passive rack design” means there are neither pumps nor fans in the rack, resulting in zero electrical consumption for cooling at the rack level. High power racks can operate with data centre inlet temperatures of up to 45° C, allowing for different cooling loads in different climatic conditions.

“The second benefit is about the temperature…It gives you the ability to use that heat and reuse that heat,” Klaba added, which makes affordable heat recovery systems possible.

He noted that OVHCloud chose to expand its presence outside of Europe into Canada, as it helped the company lower its overall energy footprint at group level.

The company’s data centre in Quebec, powered 98 per cent by hydroelectricity, is providing a stable and renewable source of energy. OVHcloud is opening its second Canadian data centre in Ontario in 2023, supplied 92 per cent by low-carbon energy.

“When OVHcloud decided to expand beyond Europe, we looked for locations that make sense for our customers and that are sustainable, to stay on track with our goal to be carbon neutral by 2030,” said Klaba.